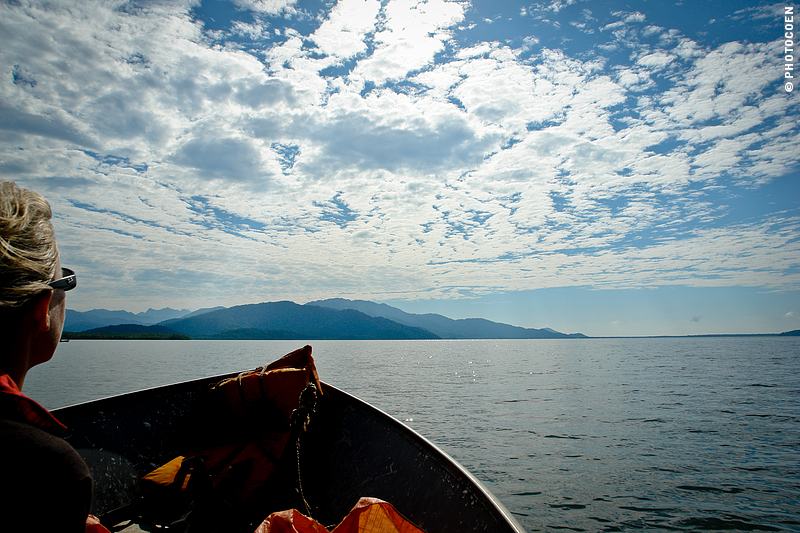 In the early morning we sailed through the Baia de Guaraqueçaba in an open motorboat: a world of sapphire-colored water surrounded by blue-grey mountain ranges outlined against a cobalt, slightly clouded sky. With dolphins accompanying us in the distance, the scenery couldn’t have been more peaceful.

We were on our way to the Ecological Sebuí Reserve in southern Brazil.

From open water we turned into a river meandering through thick mangroves. The river narrowed, sunlight disappeared behind the foliage. From the landing stage, a fifteen-minute walk through the forest took me to a clearing with a large community house and several basic wooden cabins for guests. Don’t expect comfort here in terms of fans or aircon, television or Internet.

The quality of Sebuí’s Ecological Reserve is reflected in meals produced with local ingredients, personal attendance of the owner Enzo and his staff, and the variety of outdoor activities in extraordinary surroundings. Most of all, this lodge actually operates in accordance with the ‘rules’ of ecotourism – in contrast to many other lodges in Brazil, for which ‘eco’ is nothing but a marketing term.

Enzo, I quickly learned, is passionate about his lodge and forest. On hikes he explained the dynamics of the forest using explanatory panels, photos and other material. A typical visual example was a patch he had created where he had put various pieces of garbage: cigarette butts, plastic bottles, cans. An explanatory panel detailed how long it took for the garbage to disintegrate.

In order to be an ecolodge, there are the obvious requirements, such as using solar energy and having cabins and walkways built with fallen trees instead of cut trees. But Enzo takes it farther than that. Staying here taught me about a biological process called permaculture, a perfect way to recycle wastewater. Did you know that the cebolana plant thrives on human excrement? The more it gets, the more it flowers. The sewage of the lodge is channeled to flowerbeds that are, inadvertently, nurtured by the guests of the lodge (don’t worry, you don’t see or smell anything distasteful).

Reserva do Sebuí’s eco element is also reflected in Enzo’s contribution to nearby communities where unemployment rules the lives of many.

Threats to the Atlantic Forest

However, the designation National Parks or UNESCO sites doesn’t always prevent destruction. The Palmeira, a palm tree officially called Palmito Juçara (Euterpe edulis) is one of the trees cut just for its stem, which is the vegetable known as palm heart or palmito, much appreciated in Brazil. As the tree is often cut before it bears fruit, the species isn’t given time to reproduce itself, and as a result, the Palmeira has largely disappeared from Sebuí’s Ecological Reserve.

Enzo harvests part of the seeds from trees that do survive and on his hikes throws them into the forest; in this manner palm trees are reappearing again in places where they have not stood for years. Enzo offers the Palmeira cutters education and hires them as cooks, guides, maintainers of trails, equipment and the lodge, and boatmen.

Boating Through the Atlantic Forest

That afternoon I canoed through mangroves, where the silence was interrupted only by twittering birds and the constant clacking kind of noise from the millions of crabs that inhabit the mangrove.

Part of the visit to this lodge is sailing to a nearby parakeet island at sunset when all the birds return to their nests. Unfortunately, Mother Nature prevented me from going. While thunder rumbled through the forest and lightning tore through the heavens, Enzo kindled a fire to roast freshly harvested mussels. One of the employees played his guitar and as the fire crackled into life we tuned in to the traditional songs of the Atlantic Forest.