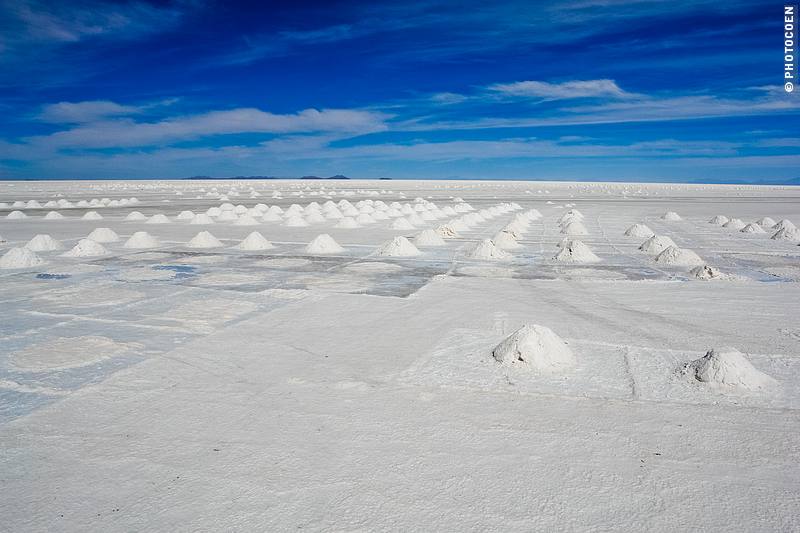 Wherever we look we see white. It looks like a world of fresh snow that has not yet been disturbed by footsteps. The silence is intense. When we step out of the Land Cruiser there is nothing except the crunching of salt crystals beneath our shoes.

We are at Salar de Uyuni!

Salar de Uyuni, in southwest Bolivia, is a vast ocean of white of 130 by 90 kilometers surrounded by the Andes Mountains. It is said to be the largest salt flat in the world containing some 10 billion tons of salt.

The sparkling ivory salt flats stretch away towards the horizon, where they are surrounded by mountains in bluish tones.

The volcanic rock islands initially appear black as ink. Only when you get closer does the color of the rock take on reddish-brown hues and with it, the giant cacti (Echinopsis atacamensis pasacana) appear into view. They grow on these islands in large numbers.

Isla Inca Huasi is a tourist attraction where all organized tours stop. It’s a scenic island covered with giant cactus. The tallest is 12 meters and since they grow only 1 centimeter per year, it means this one has been there for 1200 years.

Local people use dead cactus wood to construct homes and furniture. After a walk around the island and taking in the we return to the solitude. About 30 kilometers farther lies Isla de Pescadores, a perfect camping spot where we have the world to ourselves.

At the end of the afternoon the wind increases. Along the horizon appear clouds and dark skies. It makes the salt flat all the more imposing and mystifying. I decide to walk up the hill to see if I can reach the top. From the corner of my eye I notice something flashing by, a vizcacha! It hopes I won’t see him, if only it sits still enough.

True, if I hadn’t known it was there, I wouldn’t have seen it – its camouflage colors are incredible. It is a type of rabbit with long ears and a tail and it hops like a kangaroo. It is incredibly fast and hops without effort from one rock to the next until it is out of sight.

When I reach the summit the sun starts to set while in the east I see a storm approaching. A gray line across the sky quickly approaches our island, while on the west side the sun makes a sudden appearance from behind the clouds.

The place is threatening, unpredictable, fascinating and despite the roughness of the weather, being here brings a state of inner peace – I’m one with nature and nothing else matters.

Dress up Warmly for the Salt Plains

So much is happening that I run from left to right to take in as much as possible of this weather that changes by the second. The sun disappears. A gust of wind blows my hat away and my sunglasses fall on the ground. I have to get down before darkness falls; to crawl down these rocks with all these cacti in the dark is not a good idea.

At the foot of the hill I see a dot: Coen. He strides along the foot of the hill. Have I been gone that long? From his way of walking I can see that he is worried and is searching for me. I wave but he doesn’t see it. I yell his name. Yes, he hears me and stands still, watching me crawling down the hill.

My legs are tired now and I have to stay focused in order not to trip. I fall in a cactus which leaves me with just some scratches, so that’s not too bad. When I reach Coen the first drops begin to fall.

The sky is lit up by flashes of lightning, golden streaks against the backdrop of a black sky. The German Gods Tyr and Thor are fighting. In between the lighting and the clouds the sky colors in pastel tinges and from the front seats of the Land Cruiser we admire this spectacle of nature until darkness takes over to rule the world for the hours to come.

If you’re going without your own vehicle you will have to organize a trip in Uyuni or in San Pedro de Atacama (Chile). Unfortunately, tours are sold too cheaply due to heavy competition, which leads to cutting corners. Accidents, including fatal ones, have occurred on Salar de Uyuni. Asking returning travelers about their experiences may be a good way to get recommendations for tour agencies – or the opposite.