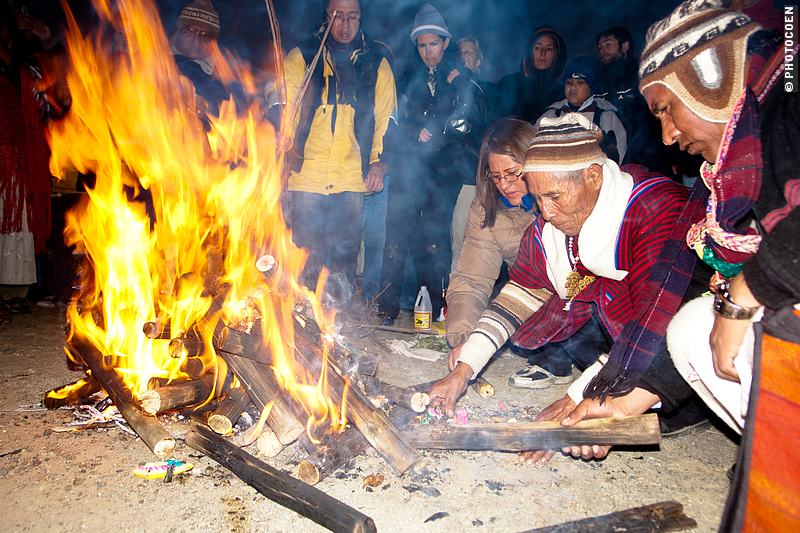 Two Aymara shamans are building a bonfire and laying out offerings for good health and fortune: a dried lama fetus and sugar tablets depicting a house, moneybags and other symbols of wealth and health. Dressed in bright-colored ponchos and woolen headdresses, the amautas walk about in a circle formed by devotees and a couple of foreigners. They interrupt their preparations by calling onto Pachamama (mother earth) and Pachakama (the universe) to bless the New Year.

All is part of the Aymara New Year celebration.

With Bolivian music playing in the background the bonfire is lit and the offerings burnt. The amautas walk around the fire anti-clockwise, sprinkling alcohol and throwing coca leaves into the flames. They hand out coca leaves to visitors so they can participate in the offerings as well.

It is June 21: The winter solstice in Bolivia, when the earth is farthest away from the sun. Since 2010 the Aymara New Year has been a national holiday. It is celebrated in different places on the Bolivian altiplano and since I am in La Paz I attend the ceremony in Valle de la Luna, not far from here, which the Aymara consider one of their sacred places.

As the name suggests, the Moon Valley is a landscape void of vegetation. It is characterized by sharply pointed rock sculptures caused by the erosion of white sandstone. The structure is reminiscent of red-colored Bryce Canyon in the United States.

The Aymara People in the Andes of Bolivia

With about two million people, the Aymaras are one of the larger indigenous ethnic groups of Bolivia’s highlands. They lived here long before the Incas conquered the region in the fifteenth century. Nowadays, many of them live in La Paz and the generally stocky, short women are easily recognizable for their dress: heavy-layered, knee-length skirts, colorful slings across their backs in which they carry their produce or babies, and bowler hats.

The Aymara people are united in, among other things, the Aymara language; for many Spanish is their second language. Their cultivation of coca has been around for centuries, which the Aymara use for medicinal purposes as well as in offerings to their gods.

At six in the morning, when it is still dark, I am among the first to arrive at the entrance of the park. I gratefully accept a cup of coffee and warm by a bonfire. The master of ceremonies leads me down narrow steps and bridges that wind through the Moon Valley by means of an oil lamp until we reach a promontory. More people arrive and in silence we watch how the amautas prepare the ceremony.

When all is ready, several men and women give speeches, thanking each other and visitors to have all come to give thanks to the sun, to thank Pachamama for the harvest and ask her blessing for the coming agricultural year.

As the microphone goes round – no reason why you can’t integrate modern elements in ancient rituals – it is handed to me with the request to say something as the representative of all foreign visitors. For a moment I’m taken aback but then find my Spanish words so express my gratitude for being permitted to join them in these rituals, of which I am aware is not a matter of course. The locals nod in agreement.

The fire is lit, offerings are made. We wait for the bonfire to burn down. The sky begins to lighten and suddenly it’s there: the first bright line right above the ink-black mountain range. As the sunbeams penetrate the valley we all face the east, with our hands up in the air to greet the rising sun. In this arid, otherworldly landscape a new day is celebrated with cheers, an Aymaran chant and subsequently music and dancing for those who care to stay.

Practical Information on the Aymara Festival