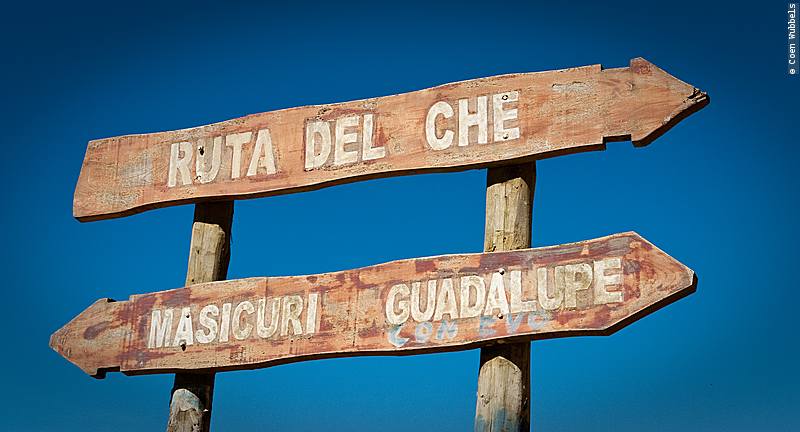 I stare down into an empty grave. Packed-down earth is surrounded by brick walls and a fence to prevent visitors from accidentally falling in. Seven stones bear the names of the persons who were buried here, underneath an airstrip, for thirty years.

The grave is protected by a mausoleum plastered in red and white, featuring Che Guevara’s image. Inside, black and white photographs tell his story. After Che fought for the revolutionary forces of Fidel Castro in Cuba and had taken his Marxist message to the Congo, he decided to return to his native continent and liberate it from ‘Yankee idealism’.

Bolivia became his basis because it bordered on five South American countries, to which he could spread his idealism, among which his own country of birth: Argentina.

However, Che Guevara found little support for his ideas in Bolivia; in fact, he was met with suspicion on the part of the Bolivian campesiños (farmers) and didn’t achieve much. On October 8, 1967 he was taken prisoner during the El Churo Stream combat and transported to the village of La Higuera. On October 9, 1967 Che Guevara was executed, after which his body was flown to Vallegrande.

Che Guevara’s bullet-riddled body was transported to Vallegrande, to the laundry room of Hospital Señor de Malta on Calle de Malta. The room is still part of the hospital, although it no longer has its original function. I can walk in freely, as obviously numerous others have done before me: the walls are covered in graffiti. In the center stands the double sink where his body was washed and displayed to the press.

Together with six compañeros, Che’s body was clandestinely buried beneath Vallegrande’s airstrip, where it remained until 1997, when the officer responsible came forward and disclosed the location of the burial site. Che Guevara’s body was exhumed and shipped to Cuba. On the burial site the above-mentioned mausoleum was erected, right outside Vallegrande.

Other guerrilla fighters had been secretly buried in a common grave nearby, among whom the only female guerrilla fighter, Tania. The burial site is nowadays referred to as La Fosa de Tania, or La Fosa Guerrilleros, and features commemoration plaques for the deceased.

Downtown Vallegrande I visit El Museo Municipal. There are only two rooms, one of which is dedicated to Che Guevara’s life with a detailed account of his time in Bolivia, maps with his routes of exploration as well as many pictures taken around his death. (The second room displays archaeological artifacts.) I found this museum the best place in Bolivia to get a detailed account of Che Guevara’s life and ideology.

Along the Che Guevara Trail

In 2004 the Che Guevara Trail was officially opened. The 500-mile route meanders from Santa Cruz down to Camiri in eastern Bolivia. Along the way are monuments and places related to Che Guevara’s guerrilla campaign in 1966-1967, with a concentration around Vallegrande and La Higuera.

From Vallegrande I drive down the 27-mile dirt track to Pucará, from where it is another 9 miles to the hamlet of La Higuera. It’s a scenic route through mountains with nice views and trails to go for short walks. Along the way are points of interest such as the Quebrada del Churo (Churo Canyon) where Che Guevara and his comrades were captured.

The plaza of La Higuera is like a major shrine, overwhelmingly filled with commemoration plaques, painted and carved images of Che. The former school building in the plaza, where the men were held captive, features a couple of photographs and paraphernalia related to his life.

I read slogans on walls and stones. More than at any of the previously-visited sites, the texts I come across now leave an impression on me of Che Guevara’s spirit: