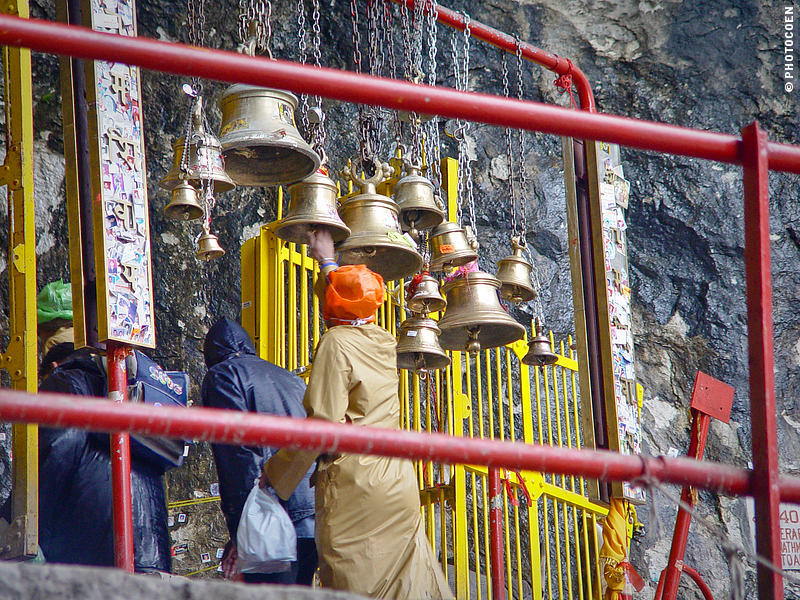 The goal of our Hindu pilgrimage is almost in sight: an ice stalagmite. A holy stalagmite. I flop down on an ice-cold stone and vigorously rub my feet that have turned blue and lost all feeling after I climbed stone steps without number in subzero temperatures.

Dozens of pilgrims walk past me, undisturbed by the elements. Many of them have hiked the entire 8.7 miles in bare feet. In rain, in mud, in freezing temperatures, from 8800 feet to 13.000 feet in Kashmir’s Himalayas. I’m not sure it’s because they can’t afford shoes or because walking barefoot to the sacred Amarnath Cave gains them points for their karma.

Hiking to the Amarnath Cave in Kashmir

This morning I joined thousands of Hindu pilgrims toiling up and down trampled paths that wind through mountains void of forests and home Himalayan glaciers. Despite the cold and the wet, slippery ground they went at a brisk pace.

They smiled, sang, chanted and shouted, “Bom-bom-boley!” or “Jai-boley!” It is some sort of spiritual greeting whose meaning remains a mystery to me. Others went up on a donkey or were carried by four men on some kind of litter. The most affluent pilgrims remained invisible; they were helicoptered to the holy cave.

Before we were allowed to set foot on the Amarnath pilgrim’s path, we underwent security checks with metal detectors, a body search and a thorough search of their daypacks.

The Amarnath Cave is considered one of the – if not thé – most important shrines in India. However, since this Hindu sanctuary is located in the Muslim territory of Kashmir, soldiers stand all along the trail, guarding the pilgrims.

According to legend it was at the Amarnath Cave that Lord Shiva, one of India’s most revered gods, recounted the reincarnation theory to his consort Parvati. He did this on a night with a full moon and in order to reinforce this story, each year an ice pillar grows in this cave. The ice pillar reaching its maximum height during the full moon in the month of Sharavan (July/August).

The ice stalagmite stands for male creative energy or the phallus, generally used as a symbol of Lord Shiva. The cave is a symbol of Parvati, representing the womb of the universe.

All in all enough reason for the site to grow into a place of pilgrimage. From all over India, but also from abroad, hundreds of thousands of Hindus flock to Kashmir for this Hindu pilgrimage. Fortunately for me, the organization allows non-Hindus to participate as well.

When I arrived, the August moon was waning and the peak season had passed. Nevertheless, I hiked the trail with some 2,000 pilgrims, which may sound like a claustrophobic experience. It wasn’t, and that had everything to do with the exuberant ambiance.

I joined the pilgrims in their enthusiasm and responded to their holy greetings with just as much fervor. I chatted with them at the stalls along the path where free food was provided. Curries, vegetable chapattis with curd and piping-hot milk-tea warmed our chilled bodies and re-energized us for the next stage in seemingly never-ending ascents and descents.

The trail reached a valley cluttered with food stalls, accommodation tents and merchants selling all kinds of religious paraphernalia. I was convinced I had reached my destination. I hadn’t. At the far end of the valley loomed a long series of steps, 500 feet up.

Somewhere on those stairs was the entrance to the sanctuary, where I had to leave my shoes behind and continue barefoot – as is custom for all Hindu sacred places. Had I ever been this cold?

The Destination – The Amarnath Cave

As I am rubbing my feet I smile at the pilgrims who announce their presence to the gods by ringing large bells and calling out once more, “Bom-bom-boley!” At last I find the strength to join them. The temple radiates religious ardor from every nook and cranny, an overwhelming setting of colors and decorations, flowers, pictures, burning incense, chatting and shouting pilgrims.

The lingam – the chunk of ice, protected by an iron fence – seems only a futile element within the whole exercise. I have reached our first goal for today and now face the second: 8.7 miles back.

Practical Information on the Amarnath Pilgrimage