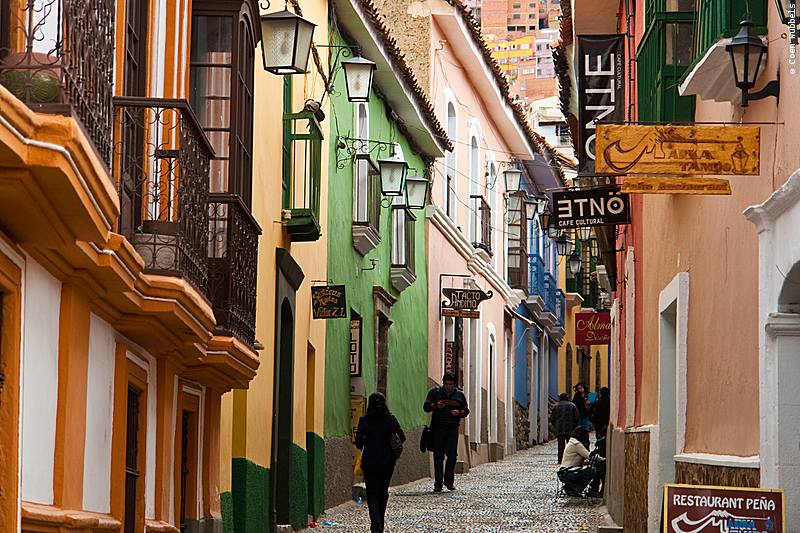 It was one of these beautiful days: a dark-blue sky, sun rays warming me, and an empty to-do list. I strolled through La Paz’ city center and ambled uphill on the northeastern side of El Prado, the city’s main avenue to visit five of La Paz’ museums, conveniently located in one street, called Calle Jaen.

It was a long walk, but as I wasn’t in a hurry it didn’t matter.

I took my time for a cafe destilado in one of the little restaurants on Calle Sucre (a good street, by the way, to eat typically local food). Cafe destilado is a brew of very strong, almost syrup-thick coffee served with hot water and you make your own mix of how strong you’d like to have your coffee.

I walked on until I reached Calle Jaen, which is, without doubt, the most picturesque street in La Paz, with colorful, plastered houses dating from the 18th century which once belonged to La Paz’ merchants.

The Museum of Musical Instruments is the only privately owned museum in Calle Jaen. It was one of my favorite museums in La Paz as it offers so much more than Bolivia’s ubiquitous panpipes and charangos (the typical ten-string Andes string instruments). Imagine these kinds of instruments:

It is a fantastic place to visit with children as there are various instruments that may be touched and played inside the museum (watch for the sign ‘se puede tocar’), while outside there is a special set-up of musical instruments for children (and parents) to play on.

Note that April 6 is the International Day of the Charangos, and that during this day many musical performances take place downtown La Paz. For specific information, check the Tourist Information on El Prado.

Here lived Don Pedro Domino Murillo, the man who started Bolivia’s revolution for the country’s independence on July 16, 1809. However, he was caught and executed by the Spanish on January 29, 1810. To the Bolivians the latter date has more importance than the actual date of their independence in 1825. Downtown there is a plaza named after him: Plaza Murillo.

In Murillo’s two-story mansion I especially loved the library with intricately carved wooden furniture as well as textiles, instruments and furniture that once belonged to Bolivian aristocracy, and ornaments of silver such as a lectern, cups and masks.

The Museum of Precious Metals is better known as La Paz’ Museum of Gold (El Museo de Oro). Before the arrival of the Spanish, the Incas already mined the slopes of Potosí for silver for ceremonial and ornamental purposes. The Incas called this mined red silver pirargirita, the Spanish rosicler.

Two rooms are dedicated to the display of ornaments and offerings made of gold, silver and bronze that belonged to Inca and pre-Inca civilizations. The third room featured monoliths and ancient pottery of the Tiwanaka civilization, an era about which you can find and read more in La Paz’ archaeological museum downtown.

I didn’t visit this museum because it was closed when I was there. No doubt it features information on the war and its heroes, maps and relics from the Pacific War with Chile at the end of the 19th century (Guerra del Pacífico, 1979-1883).

Bolivia lost the war and with it, its access to the ocean; since then it has been a landlocked country. This defeat is still annually commemorated with an elaborate parade in La Paz: Día del Mar on March 23.

This museum is located on the corner of Calle Jaen and Calle Sucre and I found it the most general type of museum without a strong focus on any particular subject. So, general as it sounds, that’s what it is: the museum gives information about Bolivia’s traditions and cultures as well as some historical events of La Paz. There are explanatory panels, photos, mock-ups and a display of ancient ceramics and objects like an old coach and a suit of armor.

The four public museums are open Tue-Fri 9am-1pm / 3-7pm, Sat & Sun 9am-1pm, closed on Monday. You can buy the tickets for these museums at el Museo Costumbrista Juan de Vargas.

How to get here if you don’t want to walk? Read this article about public transportation in La Paz.