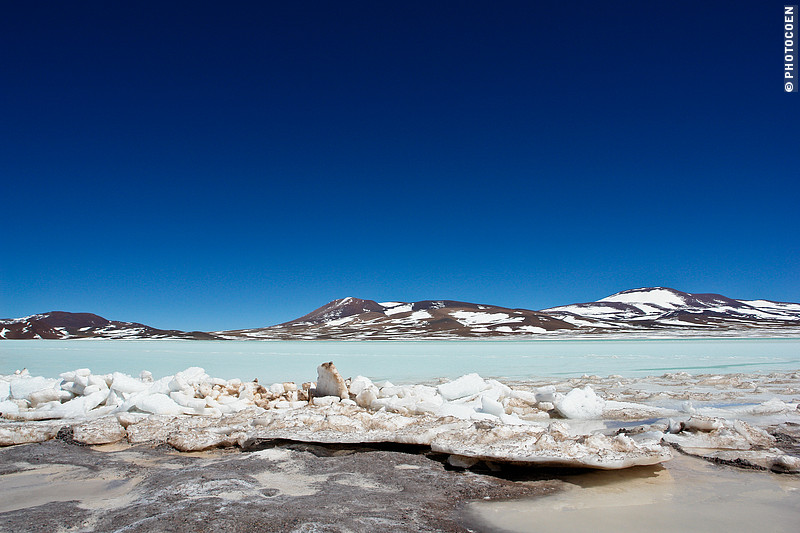 In South America we often feel overwhelmed by our surroundings, marvel at views, camp in grandiose terrains, and feel dwarfed by canyons and mountains. Among the well-known spectacular sceneries on the continent are the Perito Moreno Glacier in Argentina, Torres del Paine National Park in Chile, the Lake District in Patagonia, the colored lakes of Sud Lipez in Bolivia, and Valle de la Luna in Chile.

Let’s explore some of the lesser-known forces of nature.

We rough camp on a vastness of high plateaus and watch over a thick blanket of white clouds that fills the canyons. It feels as if we are above the earth. It’s a place to sit and meditate, to become one with nature.

Little by little the clouds move. Light patches of fog float by and the sun sends its rays into the canyon, revealing an awesome, steep gorge with tumbling waterfalls and a river running at its lowest point.

It’s difficult to tear ourselves away from this place and when we do so, our feet get soaked when we walk through the high, sodden grass. In the company of grazing cows we follow another track, along a sparkling river. Just before the river becomes a waterfall we can cross it by hopping over stones, and from the other side we have a splendid view of that same waterfall.

We drive through a landscape of volcanic lava with six-meter-high lumps of lava. The world is impressively black and void of vegetation. Ashen fields crunch underneath our boots when we walk on them; it sounds like walking on fresh snow.

In January 2008, the 3,125-meter-high Llaima volcano erupted which immediately disrupted the tourism season for that region and the park was closed for two months. This eruption wasn’t the first though. Around the park we come across vast lava streams that date from an eruption in 1957, or older ones.

Compared to those the newest lava stream is short: only one kilometer. However, never underestimate the power of an eruption: it caused a glacier to melt. Instead of lava a mass of ice, mud and water flooded and destroyed four kilometers of road.

The volcano remains active. During the day we see smoke curling up from the summit and hear deep thunder-like sounds. At night we see flames spurting into the sky. During our stay we not only admire the volcanic surroundings but also the landscapes it formed through time: mirroring lakes surrounded by forests which are home to a variety of birds.

An unpaved road twists and turns while the elevation gradually increases to over 4000 meters. Vicuñas run away as soon as they spot us. They are a smaller type of llama and it is a pleasure to watch these incredibly gracious and elegant creatures. It always amazes me with what speed they run across the high plains; the rarified air doesn’t seem to bother them at all.

The laterite road traverses a landscape dressed in brown and grey tinges that are specked by patches of snow. In the distance mountain tops are beckoning us. At 4,500 meters​ lies the turquoise Laguna Brava, which is partly covered with ice. We brace ourselves against the cold and relentless wind to absorb the dramatic view.

The lake is twice as long as we were told it would be, and we fear for our diesel supply. Not only that, but one pass is filled up with snow. We search for an alternative and in this middle of nowhere we meet a man who works on the construction of a new road. He points us into the right direction, which is a muddy, slippery track that leads along another lake, Laguna Muerta (Dead Lake), where only flamingos seem to be able to find something to eat. According to the man a plain once crashed into this lake, not only killing the pilot but also several racehorses.

The Tatio Geysers are part of a geothermal field with fumaroles activity and mineral deposits at 4,320 meters in Chile’s Atacama Desert. During the afternoon we have the place to ourselves and take a bath in a thermal pool: 85 degrees near the source, 30 degrees in the rest of the pool.

Long after we have settled in the parking lot near the geysers, and are about to go to bed, the caretaker of the park knocks on our door. “You can’t spend the night here. It’s too cold here, you have to stay near the Visitors’ Centre”. Such nonsense. Spending the night at minus ten in the Land Cruiser is no problem.

Getting the engine started at six in the morning is (lack of antifreeze), so we want to camp as close to the geysers as possible. Coen asks if it’s okay to camp next to a tiny ruin, just ten meters down the road. For some reason the caretaker has no problem for us to spend the night there…

Before sunrise a spectacular show of steaming fumaroles starts, which lasts until the sun hits the sky about two hours later. The geysers erupt around a meter in height, although several are a couple of meters high. So many spray their water around at the same time that it’s difficult to choose where to go first. They shoot up and then die down again, resting for a next explosion.

Practical Information on the Tatio Geysers

Features number one is an 86-meter-high waterfall falling into a river which cuts through the forest that fills up the canyon. Looking down from the chapada (steep cliffs, generally at the edge of a plateau) the forest looks lush and green, but our immediate surroundings consist of a savanna with dry shrubs and low trees. It’s a good area for hiking with stops at more waterfalls which are perfect for a refreshing swim.

The second part we liked is Cidade de Pedra – City of Stones, which is characterized by bizarre rock formations cropping up among bushes and trees. On the edge of the 400-meter-high tableland we sit down and take in the view.

The afternoon sun colors the jagged, reddish sandstone escarpments, as if they are on fire. A clean silence is interrupted only by the screeching of scarlet macaws that fly around in couples, and take refuge in one of the fissures in the rocks. Beneath us lies an extensive jungle, inhabited by toucans that fly from one treetop to another.

To read more about popular destinations in South America: