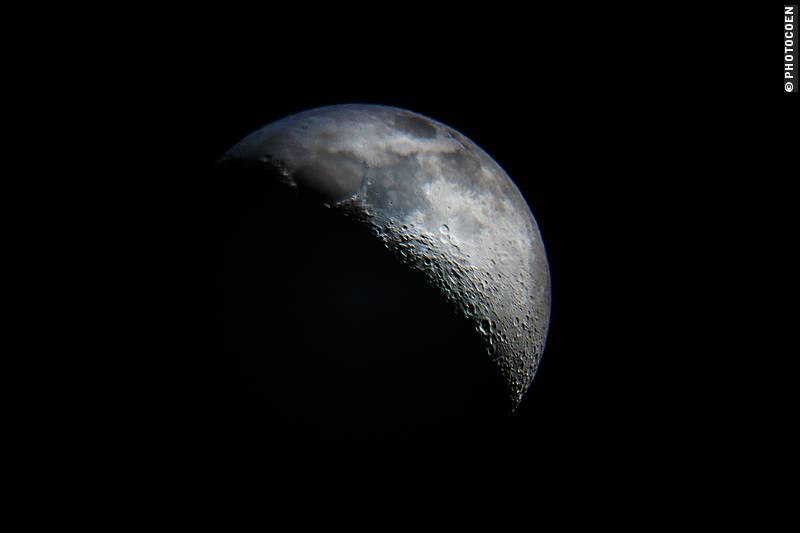 The sun was setting. It was still too early for pinpointing planets and some stargazing.

But we could take a look at the moon…

One by one we moved behind the telescope and admired a half-full moon. It felt so close that if I reached out my hand, I could actually touch it. Especially the craters were clearly visible, among which the Sea of Tranquility, where the Americans planted their flag during the first landing on the moon.

West of the moon, the planet Venus was clearly visible. Farther west were Jupiter and Mercury, situated above each other. Both disappeared quickly behind the horizon. Of course it is the earth that is turning, but from where we stood, looking through the telescope, it felt as if it was the universe that was turning, from west to east.

In the southern hemisphere, Chile offers the best opportunities to study star constellations. Especially north Chile has the advantage of a clear atmosphere. This, combined with a stable climate and few cities – thus no interference of light –, makes Region II, III and IV a heaven for astronomers.

The majority of Chile’s observatories is for scientific purposes only, but at Cerro Mamalluca visitors can enjoy this spectacle as well. Cerro Mamalluca lies in the Elquí Valley of Norte Chico, in Region IV.

The Universe up Close

I signed up for a two-hour guided tour, which is given in small groups. Guides speak Spanish and/or English. During my exploration of the universe, our guide Luis pointed out galaxies, explained legends and myths around the constellations, and showed us how to find the south by following the Southern Cross.

One of the things we learned was that what we, in the Northern Hemisphere, know as Orion’s Belt, here is referred to as Tres Marías, which according to Luis is the Catholic name for the constellation. It symbolizes the three Marías who were present when Jesus was taken down from the cross: his mother María, María Magdalena and a third María, who was the sister of one of the apostles.

What are We Looking at? The Stories

One of Orion’s stars is about to explode, Luis informed us. It is yellow, indicating it is in its last phase, but astronomers never know exactly when a star will explode. I found it impossible to grasp the notion that we were looking at a star which, in fact, had exploded I don’t know how many light years ago. Facts like a star being a young star because it’s ‘only’ 500 million years old. How do you fathom that?

Darkness fell and without the telescope we could see a cluster of six stars, known as the Seven Sisters, north of Orion. The cluster has at least twenty-five different names, but according to one legend, there were seven sisters who were in love with Orion. Father Atlas didn’t agree with this and put them in the sky. One, however, managed to stay close to Orion and therefore only six stars are visible. Luis instructed us to now check out the cluster through the telescope: There were numerous stars instead of just six. According to Luis there are at least 250!

Owning Your Own Star?

Luis had a lot of nifty stories to tell, like how a Chinese astronaut lost his toolkit when working in the universe. The kit has a length of 1.5 meters and now moves around in the universe just like the satellites. As it glitters, the kit is sometimes visible through the telescope.

He concluded with one last story, which included a suggestion. You can actually buy a star! There are Astronomy Clubs that have catalogs with all available stars. With your purchase your star will be deleted from the catalog and you even get an ownership certificate. They come as cheap as five dollars but don’t count on getting one you can see with the naked eye. You’ll need a telescope to see it.

Another thing to consider before buying anything is from where the star is actually visible. It was a bit sad for a German guy who enthusiastically bought a star for his wife, not realizing it was situated near the Southern Cross, which from Germany is never visible.

Practical Information on Stargazing in Chile