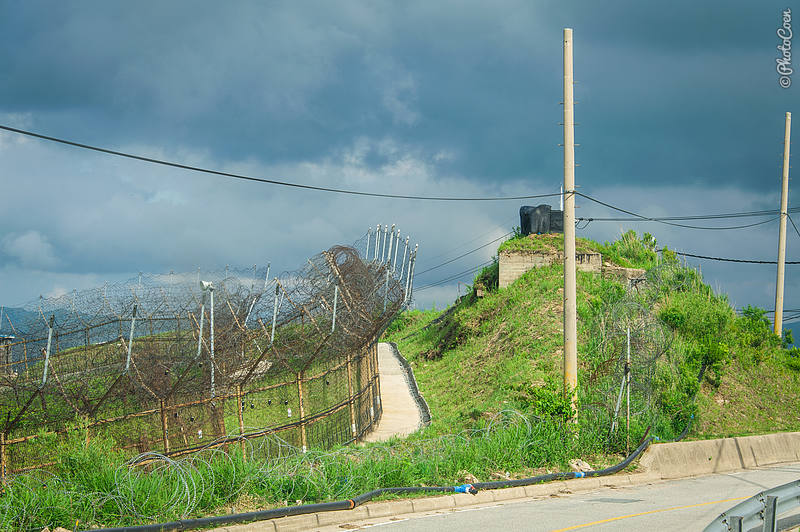 We could visit the DMZ but not take photos?

A second of disappointment as well as bewilderment. We had just driven a couple of hundred meters past fences with barbed wire and watchtowers and had been able to take photos. But now, from the highest point we couldn’t. It was, at the least, a bit inconsistent. However, feeling fortunate with the way this day had turned out we weren’t complaining.

On our arrival in Seoul two weeks earlier, I had read about Korea’s famous Demilitarized Zone (DMZ), some 4-kilometer-wide territory on both sides of the ceasefire line that divides North Korea from South Korea (the shortest distance between two opposite guard posts, however, is a mere 750 meters). A zone that, as the name suggests, should be without military presence but which in reality is one of the – if not the – most militarized area in the world.

History of the DMZ – Demilitarized Zone

After World War II, Korea got caught in the web of the Cold War, resulting in the Korean War (1950-1953). The war never ended with an official peace treaty but came to a standstill after both sides signed an armistice. And then, amidst the mind-blowingly beautiful forested mountains, the Demilitarized Zone was constructed.

On both sides of the antagonistic countries run 250 kilometers of fences topped with barbed and razored wire, right across the peninsula from the Yellow Sea in the west to the Sea of Japan in the east. North Korea initially had electric fences, a soldier explained to us, but they no longer have enough electricity in the country to keep this up. In the South, he said, all the fences have sensors with CCTV.

How to Visit the DMZ in South Korea

When reading up about the Demilitarized Zone, I understood that you need to sign up for an organized tour in Seoul to visit it. That put me off; we are not particularly thrilled about visiting places in groups, so I let the matter rest. Instead we decided to head for the east coast and left the capital, soon finding narrow roads that meandered deeper into the countryside.

I scored a local map at one of the zillion tourist information centres in this country (I love them! – while most information is in Korean, they do have some brochures and maps in English too). And that’s where we spotted the brown rectangular (on local maps indicating places of interest to visit): the 4th tunnel and Eilji Observatory, both far east from Seoul and open to independent visitors.

Really? Better have a look then.

We passed the town of Yanggu and drove uphill. Not for long. In the distance a soldier emerged from a building, moving his lower arm up and down from his elbow, motioning us to approach. One meter before a white line painted on the asphalt, he suddenly stretched out his arm to one side. “Halt!”

Right. This type of antics of people in uniform always makes us laugh. For some reason we can’t them take too seriously. As if we’d plunge straight through the fence that was two meters down the road. But we kept a straight face as I lowered my window. The soldier didn’t speak English, but looked friendly enough and of course his message was clear: we couldn’t just drive on.

The soldier found somebody who spoke three words of English, who enlightened us that we needed a ‘pest card’. We translated that to mean a ‘press card’, or ‘pass card’, and concluded he had to be talking about a permit. Apparently to be obtained in Yanggu.

Back we went to Yanggu, to the tourist information, where we bought a pass, and returned once more. And here it was confirmed: No need for a tour, or a guide.

A Peek into North Korea

At the checkpoint the soldiers took our pink paper and set out writing a detailed account of what we looked like and what we wore, which included asking for the color of our footwear.

Off we drove, farther uphill, approaching an endless barricade of barbed and razored wire. The sight turned our stomachs. About ten years ago we visited the once-DMZ in Vietnam, which fortunately belongs to the past. Our experience now was an entirely different one. Remembering something of the past vs. experiencing something of what is today.

And what is the experience, really? We’re just passers-by, from the outside looking at rows of barbed wire amidst forest-clad mountains. We don’t live here, don’t work here. While many Koreans have told us they aren’t worried about North Korea (“We don’t feel threatened, they know they may be able to win a battle but never the war with the many countries supporting our side), the threat always lingers and a lost battle may still cost you your life. And our translating soldier in the observatory would tell us that yes, they were worried about an attack.

The road ended in a parking lot, where a building housed the observatory on the second floor. Some 400-500 Koreans visit this observatory per day but very few foreigners. A soldier speaking a bit of English welcomed us and invited us to listen to his explanations.

We now know where the guard posts are stationed – tiny white squares seemingly lost in all that green. We learned about Korea’s famous mountains and their peaks, and about the Fairy Waterfall (so called, as the soldier explained, because at one time North Korea had soldiers bathe there naked to seduce South Korean soldiers). But, of this, “No photos”.

The mountains in the South look just like the mountains in the DMZ and in the North that stretches beyond it. Wildlife proliferates here, having all the space they need and no fear of being hunted down. Birds fly to whatever mountain they like in large numbers, including previously endangered species of birds such as the Manchurian crane.

On both sides of this no-man’s land soldiers stand guard, 24 hours a day, 365 days a year. Men with families. Families who want peace. Families who want to feed their children, give them an education, and who want to live in a safe and healthy environment. On both sides – as in the rest of the world – the needs are the same. Why this stupid fence?! Borders are among the most ridiculous things mankind has ever come up with, with the DMZ representing the worst kind possible.

Practical information on the Demiliterized Zone