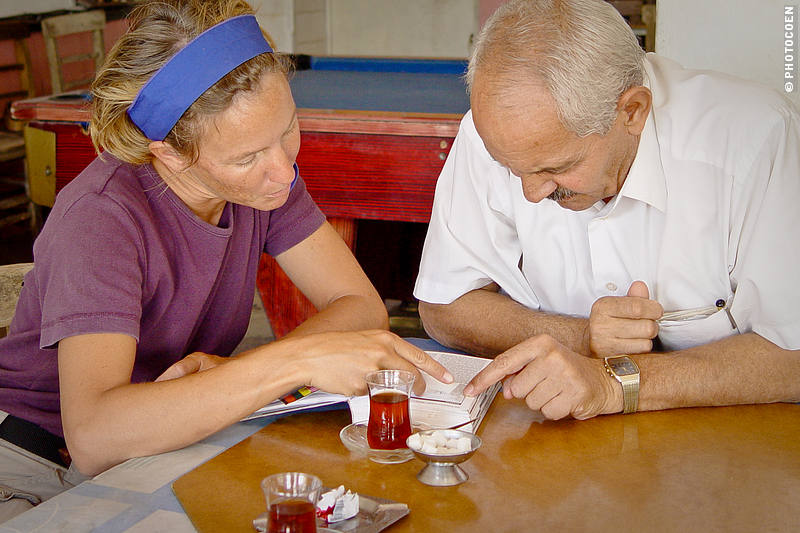 “Language is the road map of a culture. It tells you where its people come from and where they are going.” ~Rita Mae Brown

When Coen and I started traveling, in 2003, everything was new and exciting. Having our first conversations with strangers with whom we didn’t share a language was a challenge.

Using hands, feet, physical expressions and drawings in sand to get a conversation going was a lot of fun. However, when the novelty started to fade, we missed an important element: language.

Lacking a common language meant we remained on the outside of people’s life, no matter how much hospitality we received and how many laughs we shared in our attempts to communicate in sign language.

Learning the Basics of a Foreign Language

As we traveled from Europe to Asia, we made an effort to conquer the basics of the local language in each country. Lonely Planet phrasebooks were extremely helpful in this respect. We learned to say hello and goodbye, thank you and other simply expressions, and learned to count. Depending on the country this was easy (e.g. Malaysia) or a challenge (e.g. Thailand).

Of course, we could have worked harder studying those languages. But to learn e.g. Turkish, Persian, Urdu for the limited period of time that we were staying in any of those countries and then would probably never again set foot in, wasn’t motivating enough. For others learning such a language may be a goal in itself, but it wasn’t for us.

The Disadvantage of Depending on English

Apart from those few foreign words we learned and hands & feet language, we relied on English. In Asia – depending on the country and even the region (touristic or not) – few people speak English. Who does? Generally, educated people who – again generally – are city people. As a result we had in-depth conversations about life and culture with this particular group of people, which was great, fascinating, eye-opening.

However, to learn about country life we depended on what educated city people told us. We could never (well, hardly ever) actually talk to that farmer, rickshaw driver, let alone to women in the remotest corners of Pakistan, India and Bangladesh.

We realized we could not truly immerse ourselves in the life of the countryside because we lacked the language. You can stay in a village, live there, watch what’s going on, a sense of what’s going on, expressing a lot with sign language but to get beyond the surface, you need language. You need to ask questions and get answers. We couldn’t.

In Iran people couldn’t pronounce Coen’s name (Dutch vowels of ‘oe’ are pronounced as in the English word ‘soon’), or so we thought. We didn’t understand why.

They called him either Mister or bastardized his name into what sounded like Mister Queen, which we thought was funny. It took 8 weeks before an English-speaking Iranian explained to me that Coen is a dirty word in Persian (something like ‘ass’).

They could say his name, but understandably didn’t want to. Nobody minded calling him Mister but the real problem, she pointed out, was that I sometimes called him by his name from afar, which obviously was a great form of disrespect. I had to call Coen by a different name hence he became John or Pete; whatever name popped up in my head.

Without realizing it beforehand, this changed the moment we started traveling in South America. Having learned Spanish and Portuguese has enabled us to speak with, I would say, 80% of the South American people. The 20%: some of the indigenous groups in most South American countries, and you need French in French Guiana and Dutch in Suriname to have in-depth conversations with people from all different kinds of backgrounds.

English isn’t a common language in any South American country except for (British) Guyana.

Being able to talk to people at all levels of society is what makes South America fascinating to us. We can now talk to that fisherman, to the woman selling peanuts on the market, to the taxi driver, to the laborers in the fields.

We can hear from themselves how they live, how they feel about politics, about the differences between rich and poor, and we do not hear only the rich-and-educated people’s view on these issues – which you can imagine, may be one-sided and not always favorable to the other part of society.

Learning a language doesn’t mean you won’t have misunderstandings though:

We were invited to stay at a mission in a Spanish-speaking indigenous village. We joined our host at church one night. Afterwards, feeling discouraged by the hell and damnation sermon, I commented, “That all sounded quite depressing, didn’t it?”
“Well, I don’t know. I didn’t understand the part of the fisherman and the winter,” Coen answered.

I looked at him. Fisherman and winter? What was he talking about?
I figured out the ‘winter’ quickly. “No, the sermon was not about winter (‘invierno’) but hell (inferno).”
But how did he end up with the fisherman?
Then it hit me. “No, Coen. This reverend wasn’t talking about a fisherman (‘pescador’) but sinners (‘pecadors’)!”
Just one letter can mix things up quite a bit! Either get depressed about it or laugh about it. We prefer the second option.

Learning Spanish and Portuguese has been one of our best investments of this journey: in time and in effort. It has widened our horizon. In Asia we always felt there was more to the story than the English-speaking people told us (not because they deliberately withheld information, but simply because they explained a situation from their point of view or expressed opinions they held).

In Brazil we can talk to the wealthy fazenderos who are in favor of cutting down the Amazon rainforest to have more and larger ranches. It’s fascinating to listen to their views on life and economic growth. But we can also talk to many of the indigenous people, who live in reservations inside that same rainforest and who obviously have a whole different opinion on saving the rainforest or not.

We have tons of such examples. You don’t need a spoken language to connect. Body language can be enough to feel deeply connected, or sometimes just the presence of energy is enough. Sometimes that’s enough, sometimes it isn’t. Spoken language allows us to dig deeper and to get a better understanding of people’s motives to do something (or not), where they come from, how their history has shaped them into who they are today.

It has been challenging to learn the languages and it has been fun. It has been enriching to be able to talk to people from different backgrounds and different levels of education. Speaking the language made South America more fascinating that we could have imagined when arriving here six years ago and continues to do so.

How we learned those languages? I will tell you in the next blog.

1 thought on “The Major Advantage of Learning a Local Language”