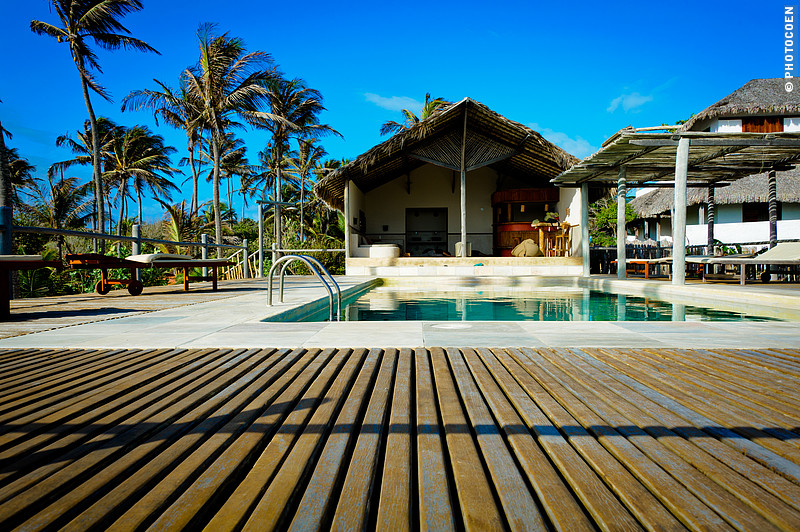 “I have some chicken on skewers left. Would you like one?” Marcel asked.

I looked at Coen. We just had noodle soup for dinner and aren’t hungry.

“With peanut sauce,” Marcel’s wife Sandra added with a smile.

Coen was lost: this guy lives for peanut sauce. The chicken, succulent thanks to a marinade, and peanut sauce came with a beer. We had already fallen for the charm of Pousada (guesthouse) Portal do Vento on arrival, but now we wanted to stay.

Only this afternoon I had still been wondering what I was doing here, in northeast Brazil. The historical cities of Belém and São Luís were far from being as fascinating as we had expected. Both cities are in a dilapidated state and you have to watch where you go when, and what you carry on you; pickpockets and robberies are common in both cities.

Our good memories are related to the warm people we met there and stayed with. However, the cities ahead of us, Fortaleza and Recife, didn’t sound too enticing anymore.

We passed uninspiring beach towns that must be alive and kicking during the high season (Dec-Feb) but which are now depressingly empty and dirty with garbage flying all over the place. I had wondered what I wanted from this particular stretch of the journey but hadn’t been able to answer that question. I asked myself where I díd want to go, other than following Brazil’s northeast coast.

One of my weaknesses was about to overtake: to let my unrest rule and fly from A to B in search of that greener grass.

Fortunately, Coen firmly decided that we were going to take the ferry in Camocin, as we had planned. It was a rickety-looking construction, not trustworthy enough to take, had been my opinion – only to arrive at another beach, which didn’t sound inspiring at all.

But sometimes it’s good to push yourself (or each other) a bit, isn’t it? Sometimes you’re uninspired or stuck in some sort of negative energy that, even though you are very much aware of your state of mind, you can’t overcome. It’s what happened to me that day. I was down while Coen was convinced we’d come to enjoy this part of the journey. As a result we quarreled quite a bit.

After an afternoon of driving around and fruitlessly searching for a place to relax, we arrived at a kitesurfers beach. A dozen or so colorful kites were flying through the air and sometimes the owners too, who appeared to be in a game of making the highest and most spectacular leaps. It was quite a sight and we watched, mesmerized.

“How about trying out this kitesurfing? What do you think?” I asked Coen.

Just watching it made me itch with eagerness to get out there myself and fly through the air.

“I’ll go ask how it works here,” he said, clearly having had the same thoughts, and disappeared.

“Guess what. The owners, Sandra and Marcel, are Dutch and they have guesthouse up the hill. They invited us for a drink,” Coen said on his return.

We entered the gate and were immediately enchanted. Several cabins stood among palm trees and cashew trees in a white-sand garden. The swimming pool, built on an elevation and with a wooden walkway around it, was lit. At the far end was the bar-cum-lounge, exuding comfortable leisure. The lighting, the smooth surface of the water, the silence except for the rustling of leaves all together created a pleasant energy.

In the kitchen I chatted a bit with Marcel, who was preparing dinner for his guests: all kitesurfers. They have a partnership with Kite World Wide and through them get the majority of their guests. This is one of the best places in the world for kitesurfers because of the warm weather (no need of a wetsuit) and the daily, strong wind (avg of 6 Beaufort); moreover, there are different places to kite: the ocean, the mouth of the river and a lake.

Kite World Wide runs the equipment rental shop on the beach and has a full-time instructor who speaks German and English. The second instructor is the fantastic kiter Jackson, a young man from the village of Tatajuba.

We were sharing a beer with Sandra in the restaurant and learning about her interest in cultural anthropology and traveling – South America in particular – while she kept an eye on their 1.5-year-old son Kyan, when Marcel made his offer for dinner. We continued talking that night as well as in the days they followed.

In Marcel and Sandra we met kindred spirits, people who live according to their own wishes and not according to some rules or norms set by society on how you should fill in your life as so-called responsible citizens. Their lives have taken a different course from ours, but that spirit of doing what is important to them, and not what society tells them to do, is a characteristic we share.

I was smiling again. I had loved watching those kitesurfers and felt their energy was exhilarating. Even more exciting was the knowledge that in a day or two we’d be joining them: we were going to do a kitesurfing course. I also smiled because of having met Sandra and Marcel, whose strong and positive energy is reflected in their guesthouse. I took a sip of beer and tasted the peanut sauce.

This afternoon I had been convinced that the coast of Brazil had nothing to offer to me. Suddenly it had and we were going to stay to thoroughly enjoy it. Life is good.

Practical Information on Kitesurfing in Tatajuba & Pousada Portal do Vento

Edited to Add in 2017: the Pousada is no longer run by Marcel and Sandra but by Kite World Wide.

1 thought on “Allowing a Place to Unfold – Tatajuba Beach (Brazil)”