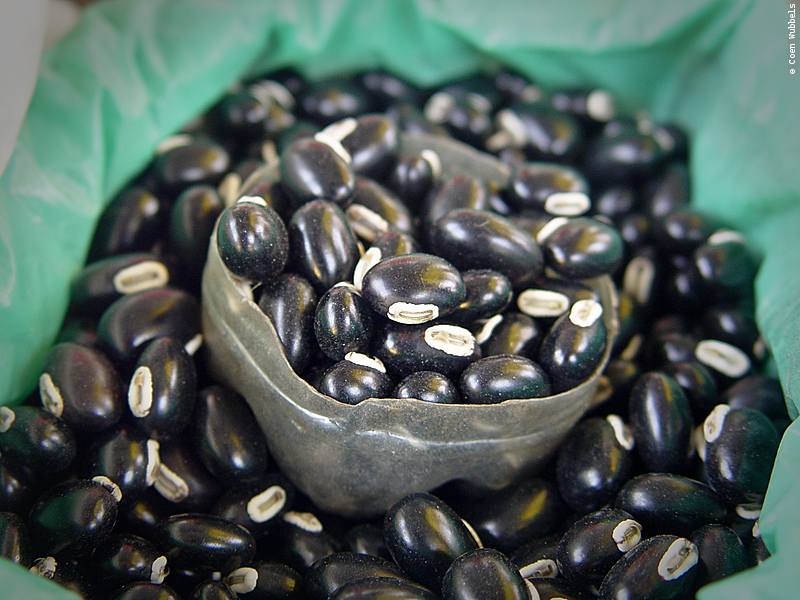 If I wanted to blend in with Brazilian culture I better started liking the traditional Brazilian food of beans and rice – Brazil’s staple food. Brazilians live on white beans, black beans – or feijão and feijão negro.

Another typical bean dish is feijoada.

Beans come with every single Brazilian meal, no matter where in the country. They are served in private homes as well as in every single self-service restaurant, and are principally served during lunch – Brazilians’ main meal of the day.

After a year of traveling in Brazil I concluded that beans and rice must be more important to Brazilians than coffee to Americans or cheese to the French. There simply is no meal served without them. In fact, it’s so common and we got used to it so quickly that we never took a single picture of this typical meal.

The feijão comes with white rice and farinha (manioc or cassava flour) or farofa (manioc flour sautéed in butter, sometimes with bits of egg or bacon). Brazil’s staple meal of feijão, rice, farofa or farinha and a piece of meat is called prato feito, which you will find in any self-service restaurant.

Lunch is generally served between twelve and two-thirty, however, in Mato Grosso lunch is more commonly served between eleven and one-thirty​. Brazilians take their time for lunch. Two hours is not uncommon and shops, offices as well as tourist attractions are often closed during those hours.

Is There Anything Else but Beans?

I did have a problem though: the beans upset my stomach. I loved the taste but there was something in there that made me have gas and/or run to the bathroom. Only later, when we started adding beans to our diet by cooking them ourselves, I learned a trick to beat that problem: soaking the beans for 2 or 3 days, rinsing them once or twice a day. So simple.

For those who have the same problem – or for those who simply don’t like beans – there’s no reason for despair: Apart from beans, rice and farofa, there is always another dish on the menu. Often lunch also consists of a pasta dish and a second type of meat, fish or chicken.

Although meat and beans are generally preferred to vegetables, most restaurants do serve a reasonable selection of cooked vegetables as well. The most common vegetable is a lettuce-tomato salad (called vinagreta), in homes as well as in restaurants – in the latter often in the form of a salad bar.

The Secret to Cooking Tasty Beans

Truth be told, I still haven’t figured out why one meal of beans tastes so much better than the other. There are large differences in quality. However, when I asked our host or a restaurant cook how they prepared their feijão, I got the unanimous answer, “I just cook them.”

Beans cooked in water is all there is to it, they say, although I have tasted varieties where garlic and onions were added. It may be that garlic and onions are just as commonly added to any dish as salt (even to white rice), and that this may be the reason that this is never mentioned in particular when asking about the bean recipe.

These condiments can even be bought in instant packages, called tempero (salt and garlic) or tempero completo (when chillies are added). Or is the difference in the traditional bean dishes not due to tempero, but a result of the preparer’s personal touch, his/her feeling of love when preparing the food? Have a try and find out for yourself.

Whether feijão branco or feijão negro is served mainly depends on the region and – to a lesser extent – personal preferences. White beans are part of South Brazil’s cuisine and are typical of São Paulo, whereas black beans are eaten by cariocas (inhabitants of Rio de Janeiro) and are the staple food in North Brazil. In my opinion black beans are tastier, which may be the result of the fact that they may be cooked with bacon and/or herbs such as bay leaves.

Feijoada is a meat & black-bean stew. It is considered Brazil’s national dish. Apart from this common denominator there are dozens of regional and personal varieties. Traditionally the stew is eaten for Saturday lunch, although some restaurants pick any other, specific day of the week to serve feijoada.

Bean stew is a typical meal from the rural areas, although according to some it originated with the African slaves, who tried to make a meal of everything they could get their hands on. One way or another, feijoada is a stew in which all kinds of meat, organs, sausages, and off-cuts such as feet, tail and tongue are used, whether it is pork or chicken.

The stew is slowly cooked with taste enhancers such as salt, black pepper, bay leaves, garlic and onion. Like white beans and black beans, feijoada is served with white rice and farinha or farofa. Typical of feijoada may be the additional serving of orange slices, peppers, kale, and/or collard greens.

And so, there you have it: the story on Brazilian beans. When traveling in Brazil, do give them a try in every single region, because despite beans being Brazil’s staple food, there are too many local touches that you don’t want to miss.

Additional Reading about Food in Brazil

2 thoughts on “What’s There to Like about Beans? – Check out Brazil’s Staple Food”