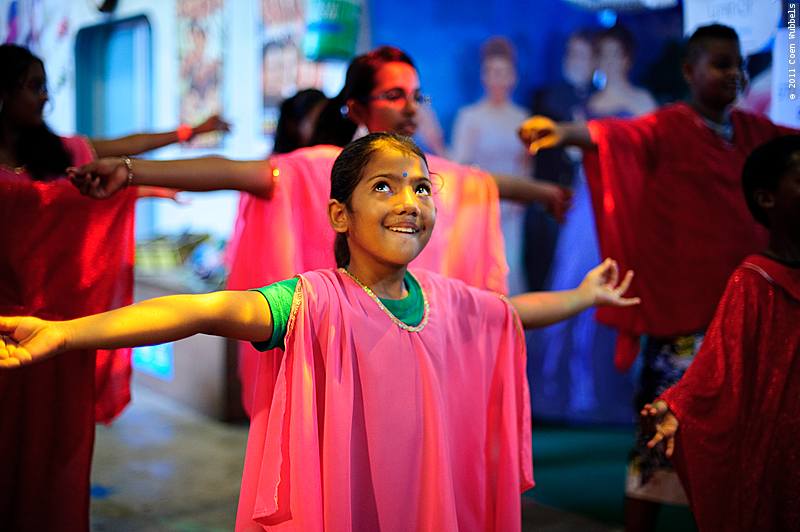 Museums for children, or at least museums where kids are having just as a good time as adults are, may be common nowadays in the U.S. and (part of) Europe.

In South America, on the other hand, children’s museums are still pretty much an alien concept.

During our visit to Suriname in 2011/2012, we stumbled upon the Children’s Museum of Villa Zapakara and were in for a pleasant surprise. The museum had been transformed into the metropolis of Mumbai (formerly Bombay). Children learned about art, dance, culture and daily life in India through interactive programs and could feature in a Bollywood Movie. It was absolutely brilliant.

A Star in the City

There were 1-hour workshops on Indian crafts and a 75-minute tour of Mumbai. Kids could use the multimedia room or watch a movie in the Talkies (cinema). Dakaya Lenz, the manager of Villa Zapakara, explained, “Through these programs we want to stimulate the children’s curiosity to explore new things, to learn about a different country in an educational and interactive way.”

A banner above the gate to Mumbai invited the kids: “A Star in the City.” When our arrival children were learning how to make rangolis. These are delicate designs made with colored sand, which in India people often make in front of their door entrance during religious holidays. Children could choose their own design and color, and make as many rangolis as they wanted.

The Train to Mumbai to Work and Become a Star

But the children had to watch the clock. They didn’t want to miss the train to Mumbai! After all, they came from the countryside wanting to travel to the big city and just before the train left, they all gathered at the train station. Here they met their aunties, dressed in Indian shalwar kameezes: Shaundel, Priya and Cher.

“Mumbai is the city of dreams, but you need an aunty to find your way around the big city, and help you in the workshops,” Priya explained.

We followed the group into the train, where we had to hang onto a handle because the train rocked us back and forth. Meanwhile we watched the landscapes that pass along the windows. When the doors opened, we stepped into Mumbai. A black and yellow taxi stood waiting next to a large Ganesha elephant statue.

The aunties gave a tour, explaining how the public phone worked, where you could buy clothes and told the story of how a chai wallah – a seller of milk tea – worked his way up and now owned his own restaurant. “If you want to be successful, you always have to start at the bottom,” they warned.

Each child was assigned to a workshop and each group had a manager. Being the manager was an important job. Chanel (8) at the flower shop was busy taking phone calls to take orders and made sure the orders were delivered in time. The children made flower garlands, painted pottery, or worked in the restaurant, where they prepared Indian snacks and served the typical Indian milk tea called chai.

In the background were the typical noises of Indian traffic. All of a sudden these were interrupted by an announcement. The aunties understood what this meant: somebody was recruiting participants for a Bollywood movie. This was a chance to become a star!

The children were dressed in colorful shirts, learned a dance and were videoed.

Not much later, while eating a delicious Bombay sandwich with chutney and cheese, they could watch themselves on a screen in the New Roshan Talkies Theater. Their dances had been incorporated in a real Bollywood movie clip. It was done brilliantly.

It was time to go. There were other workshops to attend. Depending on the museum’s weekly schedule this could be, among other things, sculpting and painting a Ganesha statue, decorating your hands with henna or playing cricket.

As I walked the grounds I noticed a rickshaw standing under a lean-on.

“Where are you going?” I asked the driver.
“To the Netherlands,” four-year-old Tania informed me.
“Can I come, how much will it cost?” I asked.
“Two hundred SRD (Surinamese Dollars). But it is very far. One hundred hours,” she warned.
“No spang,” I say, “Not to worry.”

4 thoughts on “Children’s Museum of Villa Zapakara in Paramaribo, Suriname”