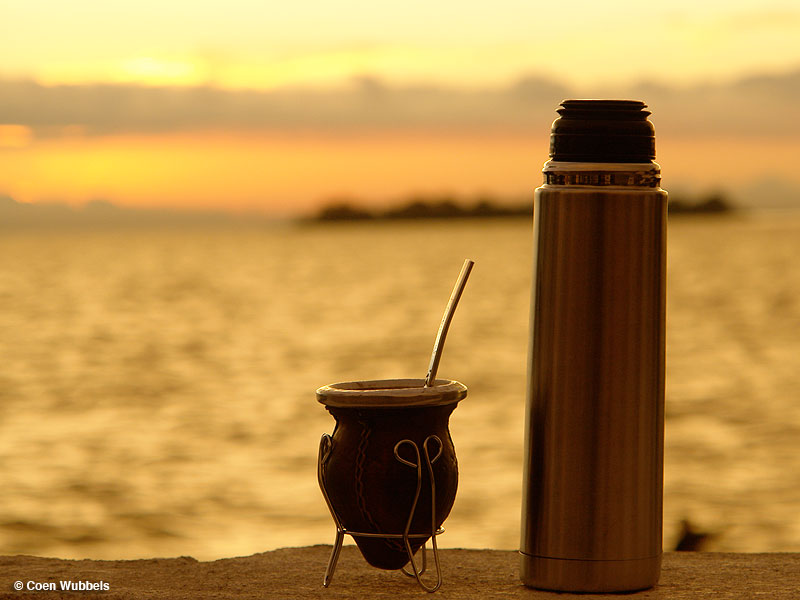 I picked up the thermos and filled up the gourd with mate, a popular herbal tea in Uruguay. Coen and I were sitting on a low wall along the Río de la Plata, the river that divides Uruguay and Argentina. The sun slowly sank into the river and sets the sky aflame.

Everything was perfect: my company, my drink, the sunset and Colonia del Sacramento, Uruguay’s most scenic village.

Visiting this village felt like a time warp: traveling back in time into the distant past. The town’s turbulent history, during which it was alternately subject to the Spanish and Portuguese crown, left a rich legacy in historic landmarks. As a result, the Barrío Histórico (Historic Quarter) was declared a UNESCO World Heritage Site in 1995.

In 1680, the Portuguese Admiral Manuel Lobo established Colonia del Sacramento by order of the Lisbon Court. It was a strategic point from where the Portuguese smuggled contraband into Buenos Aires, which belonged to Spain. The geographical and political location of the town led to a 150-year-long dispute between the Spanish and the Portuguese crowns and both powers ruled the town.

This is, for example, still visible in the way the streets were constructed: the cobbled streets with a drain running in the middle were built by the Portuguese, the ones with drains along the sides, by the Spaniards.

The turbulent history and the preservation of ancient architecture put Colonia del Sacramento high on the list of popular tourist towns. Besides having a rich history, the town is simply charming, there is no other word. A pleasant collection of narrow alleyways, plazas with sunlight filtering through the plane trees, adobe houses with time-worn doors, outdoor cafés to enjoy a cup of coffee, and a feeling of complete tranquility.

The Barrío Histórico is small and you can take in the sights in just an afternoon. During our stroll we came across La Puerta de Campo, the City Gate and a wooden drawbridge dating from 1745, which marks the entrance to the historic district. We took in the ruins of the 17th century Convento de San Francisco, and checked out El Faro, the lighthouse dating from 1857 and constructed with the stones of the Convento de San Francisco.

Colonia del Sacramento is home to Uruguay’s oldest church (1699) but all sights are surpassed by a narrow cobbled alley called Calle de los Suspiros (Street of Sighs) which oozes secrets and legends. The legends may be related to people condemned to death who, sighing all the way, were led down this street to be drowned in the river.

Or: the street had many brothels and sailors walking past the prostitutes sighed for them. Or – the most tragic story – a young maiden waiting for her love was stabbed by a masked man and the last sound she uttered was a sigh.

Considering the size of the town, Colonia del Sacramento boasts a large number of museums. Among the ones we enjoyed one that exhibited Portuguese furnishing, uniforms and, our favorite, maritime maps (El Museo Portugués), and El Museo de los Azulejos which featured colonial tiles.

As I filled up my gourd once more and took a sip, I reflected on the day and concluded we had done our share of sightseeing for the moment. We would stay another day because on another stroll we were bound to find other nooks and crannies that are inevitably part of historic places like this.

For now it was time for dinner.