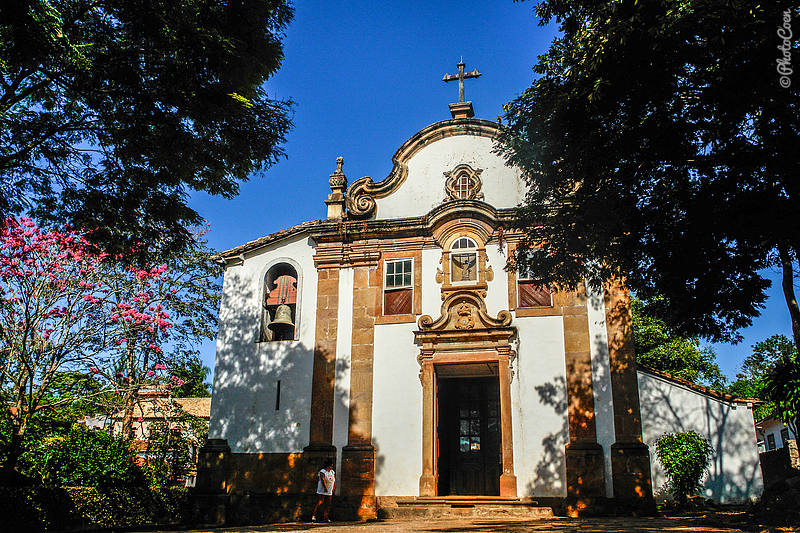 In the 17th century gold was discovered in Minas Gerais, an area north/northwest of Rio de Janeiro. It led to an explosion of gold mines and cidades históricas with ornate architecture reflecting the resultant wealth. Once the gold was depleted many people left, seeking their fortunes elsewhere; however, colonial architecture still abounds.

Minas Gerais is the place in Brazil for colonial churches buffs.

According to our guidebook we would find more than thirty baroque and rococo churches worth a visit in this region. While we visited most of them – call us freaks, if you like – I am aware that this is a mission impossible for an average two or three-week holiday.

So which of these ecclesiastical landmarks are a must-see? Here are four churches that I believe will give you a good impression of the religious architectural glory of those days.

The most famous architect of the baroque era in Minas Gerais is Aleijadinho, and you will find his Barroco Mineiro artwork throughout the state (such as in Congonhas). The São Francisco de Assis church in Ouro Preto – his place of birth – is considered one of his best works. The exterior of the church has elegant, round-shaped contours, which is a contrast to the common square-structured churches in Minas Gerais.

São Francisco de Assis is a much-venerated religious figure and in Brazil you’ll find dozens of churches named for him. Check out Aleijadinho’s striking relief above the entrance of this church with Francisco receiving the stigmata from Jesus.

Inside you’ll find the undoubtedly most extraordinary ceiling painting in the whole of Minas Gerais. This trompe l’oeil, painted by Manuel da Costa Ataíde, is a sight for sore eyes, depicting Mary in heavenly spheres surrounded by angels worshipping her with music.

The corners of the wooden ceiling depict the four Latin Church Fathers: Ambrose, Gregory, Jerome and Augustine, which is uncommon in Brazilian churches.

Same name, same architect, and similar in structure and baroque art. Reason to visit this particularly graceful church is its beautiful location, which does full justice to the architectural shape of the building. The elevated church is reached via switchback stairs at the end of a lyre-shaped plaza.

On the plaza, in front of the entrance, stand two rows of incredibly tall, elegant palm trees, whose shadow, at sunset, form the strings of the lyre.

One of São João de Rei’s important festivals is Corpus Christi, celebrated on the Thursday after Trinity Sunday (which is the first Sunday after Pentecost). Streets are decorated with colorful designs made of flowers and sawdust (see photo at the top of this blog post), which take all morning to prepare and which is fun to watch.

The procession takes place during the afternoon and passes along São João de Rei’s five important churches, whose bell towers are tolled manually.

Most baroque churches are a show of pomp and circumstance, which you either appreciate or you don’t. An interesting contrast is this slave church (pretos =’ of the black people’, specifically referring to slaves in this time period), which stands out for its rudimentary yet attractive exterior and interior, as well as its images of black saints.

NS Rosário is Brazil’s Virgin of the slaves. This church was constructed by slaves in the 17th century during nightly hours – when the workers were not slaving for their boss.

The NS Rosario dos Pretos Church is also one of the few churches in Minas Gerais where the caretaker has a genuine interest in the place she works, and is happy to tell the tales of the history of this church.

According to one of these stories slaves smuggled gold from the mines in their hair or hollow teeth to decorate the interior of the church.

In the 18th-century diamond João Fernandes de Oliveira married his slave, Chica da Silva, who became a well-known, much-respected lady even in high, colonial circles. The history of Diamantina (a UNESCO World Heritage Site) is peppered with fascinating tales, legends and/or myths with regard to this couple.

The NS do Carmo Church stands two blocks down from their old mansion, which is also open to visitors. At the time it was the richest church of Diamantina, and it has opulent baroque carvings, a gold-layered retable as well as a gilded organ. The interior has remarkable paintings from the Portuguese painter José Soares de Araujo, among which a beautiful portrait of the prophet Elia who ascends to heaven in a chariot of fire.

Another story, the less idyllic version, explains that the bell tower was constructed at the back so the bells wouldn’t disturb Chica ca Silva when she was sleeping.