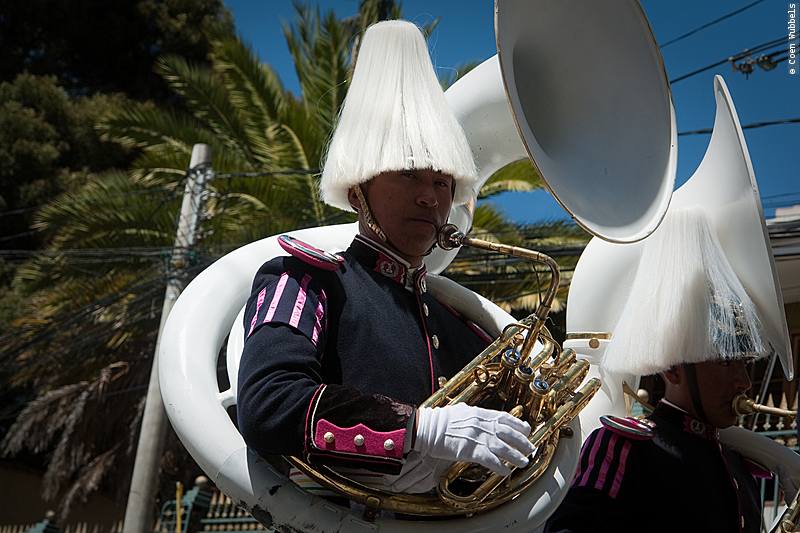 One of Bolivia’s important days of commemoration is Día del Mar. During this ‘Day of the Sea,’ the country remembers the War of the Pacific in 1879, during which Bolivia lost its access to the Pacific Ocean. In La the occasion includes a daylong parade of military units, government departments youth bands.

It’s a parade worth watching.

How Bolivia Became a Landlocked Country

Bolivia and Paraguay are the only two landlocked countries in South America. Whereas Paraguay never had access to an ocean, Bolivia did, and even more than 130 years later still suffers from the loss of its access to the Pacific Ocean to Chile.

In the nineteenth century large deposits of guano were found along the Pacific Coast and nitrate was discovered in the Atacama Desert. Both proved good fertilizers and were important export products to the United States and Europe. The region in question covered parts of Chile, Bolivia and Peru and each fought for the economic success.

When in 1879 Bolivia raised the import duties on saltpeter, Chile declared war on Bolivia as well as on Peru – after the latter declared to take sides with Bolivia. During the five-year War of the Pacific, Chile confiscated large areas along the coasts of both countries and Bolivia became landlocked.

Despite Bolivia’s having lost access to the sea it still has a navy, which has patrolled Lake Titicaca and the large rivers of Bolivia’s lowlands since 1884.

Plaza Avaroa – Bolivia’s Hero of the War of the Pacific

As a form of compensation Chile constructed a railway between Bolivia and the seaport of Antofagasta and allowed Bolivia free port facilities. However, the issue remains a bone of contention between the two countries and especially the Bolivians live with a feeling of resentment towards the Chileans because of this war.

Eduardo Avaroa (or Abaroa) was one of Bolivia’s military leaders during the War of the Pacific, during which he lost his life. The most southern national park of Bolivia, Reserva Nacional de Fauna Andina Eduardo Avaroa, is named after him and in La Paz a large statue was erected on Plaza Avaroa.

Día del Mar – the Day of the Sea

Not only is the War of the Pacific an important issue in Bolivia’s educational programs, the country is yearly reminded of its loss on March 23 – el Día del Mar. The event starts on the evening of the 22nd with a large military parade through some of La Paz’ streets and speeches are held in several locations in the city.

On March 23 an hour-long parade of military units and government departments takes place around Plaza Avaroa. The focal point of the parade is Plaza Avaroa, where Bolivia’s president will salute all participants from the VIP grandstand. The snow-white uniforms of the Marines are a stark contrast to the elaborate, colorful attire of other units and are a sight for sore eyes. Apart from the uniforms there is a fascinating diversity of arms to admire, such as highly polished sabers and other types of swords, as well as guns.

A marked contrast to the serious-looking military and government officials is the large number of teenagers who participate either in bands or march as majorettes. Whereas bands and dance groups used to be activities of private schools only, they have recently become part of the curriculum in public schools, which enables poor children to study music or dance as well.