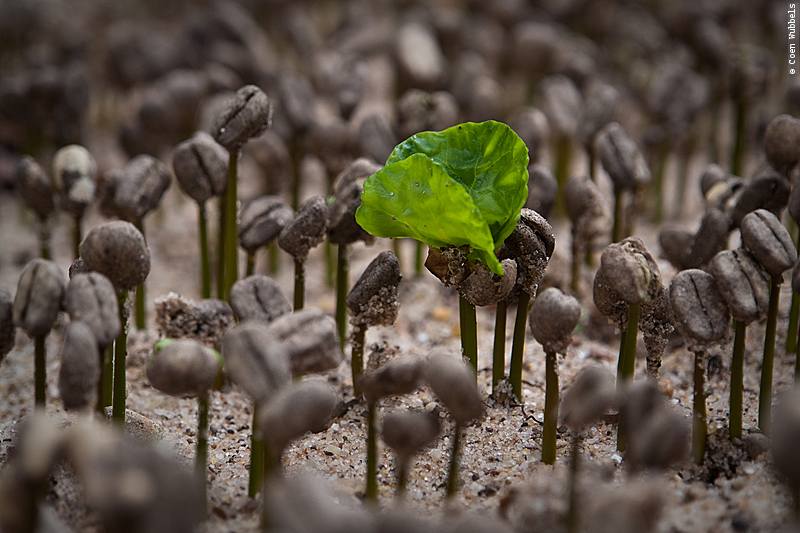 Bolivia is one of the world’s producers of Arabica coffee. While the Yungas (north of La Paz) is Bolivia’s traditional and principal coffee-growing​ region, the country’s largest exporter is situated in the department of Santa Cruz – in Buena Vista, to be exact.

A friend suggested visiting a coffee plantation-cum-factory and, of course, to taste some high-quality, organic coffee.

We were on our way to Hacienda El Cafetal.

The colonial town of Buena Vista is a popular weekend retreat for residents of Santa Cruz and Cochabamba, but more and more gringos – foreigners – find their way to Buena Vista as well. We immediately noticed that visiting Hacienda El Cafetal is a popular attraction: several agencies were offering tours.

Since we have our own Land Cruiser, we drove to the plantation, some five kilometers south of the plaza, and at the reception of Hotel El Cafetal, situated on the premises of the coffee plantation, we asked about the possibilities for a tour.

Too bad. It was the off-season. No production, no tours. But we could have a coffee though. Caretaker Juan had time on his hands, it was raining, so why not. We ended up spending a large part of the morning in the bar, sipping hot and strong, organic espresso while discussing the history of the hacienda, organic vs genetically modified foods and the potential for eco-tourism.

Juan explained that the production workers are the ones who give the tours because they are much more proficient in translating their passion for coffee to visitors than guides from outside who in general lack the affinity with the coffee industry. As Juan concluded with a smile, “Our guides are able to explain the aroma of the coffee.”

El Cafetal’s Arabica coffee plants grow in the shade of a non-native tree: the cerebo. However, this fast-growing tree doesn’t fare too well here and there are ideas under development of replacing it with bamboo or other shady, native trees. Part of the production area – La Planta de Beneficio – is outside.

Here, coffee plants are cultivated and coffee beans are washed and dried. The roasting of the coffee beans is done in a large hall. For children are excellent explanatory panels, on which each step of the process is explained by cartoons that humorously relate the life of a coffee bean.

Adjacent to the plant is Hacienda’s outdoor café – which was now void of people except for us but during the high season it will be a perfect place to taste different kinds of coffee – with a small, well-set-up museum where panels explain more about the making of coffee, the history of coffee, as display graphics about coffee production.

We returned to Juan for another coffee who then showed us around the characteristic Hacienda with fantastic views of the Amboro National Park. Four spacious family cabins originally functioned as weekend retreats for the first owners of this coffee plantation. A couple of years ago the cabañas were transformed into a hotel and four more cabañas were added, each equipped for two persons.

The cabins are located around the swimming pool and garden – a perfect playground for children. With any luck, you will be visited by one of the sloths that enjoy spending the night on the veranda of the cabin.

The big attraction of this place is the view of Amboró National Park; sunrises are a reason in themselves to rise early and walk onto the balcony for a spectacular start of the day.