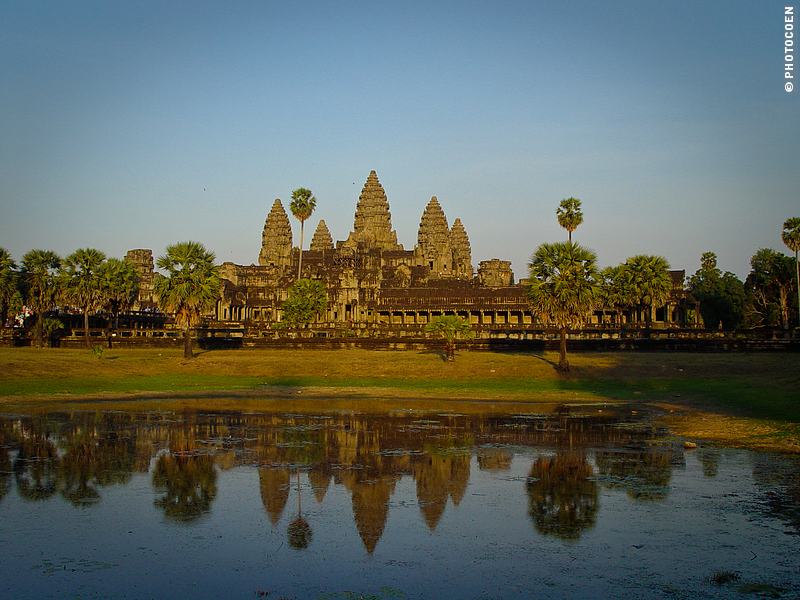 It’s a moment to absorb the overwhelming art of dozens of Angkor Wat temples we’ve admired in the past three days.

The History of Angkor Wat in a Nutshell

Officially, Angkor Wat is just one temple. However, the term Angkor Wat is generally used to indicate the 400-km²-large Angkor Archeological Park, which comprises some 100 temples. The temples were constructed between the 9th and 15th centuries by the Khmer Kingdom, which at the height of its power reached as far as South Vietnam, Laos and into Thailand. It was an agricultural era and with the fertile lands around the Tonlé Sap lake – the center of the Khmer Kingdom– there was an abundance of food for the ever-growing empire.

The first important king was Jayavarman the Second. To claim his power he instituted the cult of devarajas – God Kings, which meant he had the same powers as the Hindu god Shiva. The following kings tried to outdo one another, which led to more, bigger, richer embellished temples. Now only the stone temples remain, all buildings constructed of wood having perished in the tropical climate.

Tips for Visiting the Temples

Whole books have been written about these temples. Where does that leave me with one article? Let me give you my tips on how we explored the temples and what worked for us to see a lot without getting saturated, to avoid the crowds, and to stay enthralled:

Best Time to Visit the Temples

When you buy the 3-day pass at 4 o’clock, you get the rest of that day for free (your pass starts the next day). We took those hours to explore the lesser-known temples farther away from the complex like Phnom Krom. They are the least-embellished and among the oldest temples. It’s a good place to visit if you like exploring temples in solitude because these receive very few visitors.

Sunrise at Angkor Wat, which came with the sound of a zillion clicking cameras as this is the most common start of anybody’s exploration of Angkor Wat. Not without reason; it is quite a spectacle.

Many tourists subsequently returned to their guesthouse for breakfast so we used these quiet hours to explore this most popular temple in all peace and quiet. Angkor Wat is one of the best-restored temples, which not only presented us with exquisite art of sculptures and murals, but also somewhat sterile surroundings.

Among the other popular temples are the Bayon with 216 sculptured heads, and Ta Thom, which is left in ruins the way it was discovered in the 19th century, with temples and fig trees standing in symbiotic support.

A Favorite and a Deception

Preah Khan is partly restored with fig trees having maintained their right to remain here. It was our favorite temple. For hours we challenged each other to find yet another lingam or carving in deeply-hidden corners of the ruins.

In one alley sat an old woman in front of burning incense. She followed our enthusiastic hunt and when she caught my eye, she pointed to an incredibly tiny alley. In a corner I found a beautifully carved apsara (sculpture of a mythic nymph who serves the gods).

On Day 3 we drove to what we were told is one of Angkor Wat’s masterpieces: Banteay S’Rei. As is often the case with high expectations, it was a letdown, but it was our only deception of Angkor Wat. Not the temple itself because the intricate carvings of, among others, the Hindu God Krishna, are outstanding. But the temple is so small and the number of people was so large that we had to stand in line. Guards pushed the crowd on, which hardly gave us time to study or absorb what we were looking at.

We needed tranquility and found it a couple of miles down the road.

I stared at Vishnu and Laksmi in the crystalline water of Kbal Spean. The site was only discovered in 1968 and I felt grateful that I could still see this. The guard who accompanied us to these remote sculptures had explained that exactly because of the remoteness, many heads of Vishnus and even entire lingams have been robbed from the site for commercial purposes.

“It’s impossible to guard everything,” the guard told us.

Only in the following days, as we explored the forest for far-flung temples, I would come to understand that it is, indeed, a mission impossible. The Cambodian forest is littered with land mines, and its tropical climate reclaims and covers what once were masterpieces of art within years, months even. It takes dedication – or a ruthless drive for money – to find these hidden treasures.

“Come, I’ll show you something,” the guard said as he saw the doubt on my face. He took us to a couple of carvings that weren’t in any book yet because it was only very recently that they had been discovered by chance. I suspect that the discovery of more art and temples will be a never-ending process. Let’s just hope it’s done by those who care about them.