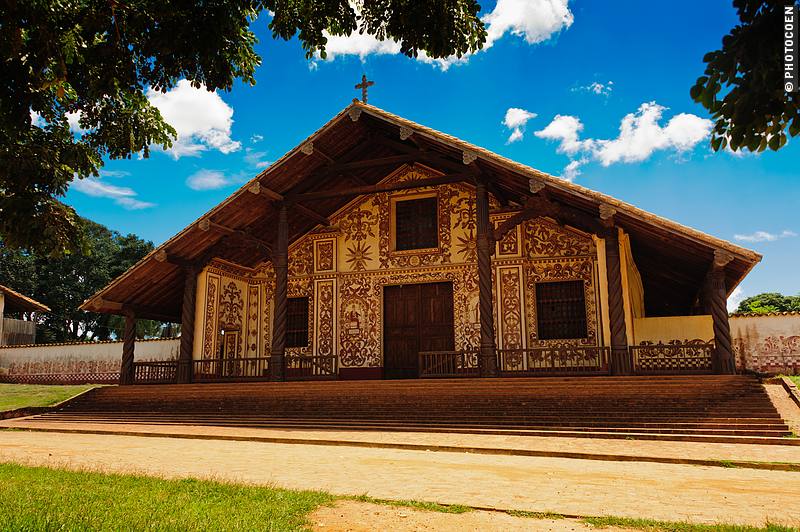 I have fallen in love. Again. It’s been a while, but boy, does it feel good. I look at Coen and I know the same has happened to him.

Yet, we haven’t fallen in love, again, with each other.

This has nothing to do with feelings towards each other, but with architecture, history and art. The Jesuit Missions in Bolivia are a feast for culture buffs like we are. It’s been a while since we have seen such astonishing, well maintained historical sites and we are feasting our eyes.

The story of the Jesuits in South America is an interesting one (16th-18th century). In north Argentina, Uruguay, Paraguay, south Brazil and east Bolivia they built missions, locally called reducciónes. These settlements protected the indigenous people against Bandeirantes, men who hunted the wilderness for gold and/or for people to capture and enslave.

The missions we are currently exploring are in eastern Bolivia, six of which obtained a UNESCO World Heritage status. The missions were administered by Jesuit priests and a council of indigenous people; an exceptional way of management for those days. The construction of each mission started with a wooden cross surrounded by 4 palm trees in the center of the plaza, which can still be seen in some of these towns.

On one side of the plaza they built the church, bell tower and courtyard and living quarters for priests and others. Along the other sides of the plaza, and beyond, they constructed small houses with pillar-supported roofs.

The missions came close to utopias where every revenue was shared, everybody was equal and creating works of art was stimulated. However, the Jesuits were so ambitious that they became wealthy and powerful units, too much so to the liking of the pope. In 1767 they were expelled from South American soil.

Now about our falling in love story: the Jesuits trained the indigenous people to become artisans, for which they turned out to have an incredible talent. European influence contributed by the priests was mixed with local arts, which in Bolivia became known as baroco-mestizo. They constructed beautiful churches with carved pillars, murals depicting flowers and animals, intricately carved and painted altars, pulpits and sculptures.

The result may not be to everybody’s liking, but we love it and in particular admire the simpler churches of Santa Ana, San Rafael and San Miguel, which have little of the pomp and circumstance that the missions of San Ignacio and Concepción have.

We stroll about for hours, taking in details and searching for expressions of syncretism, which we find in the pulpit in San Miguel. The head of the support beam is carved into the head of an angel. Its hair widens out into the leaves of a palm tree and the angel’s body forms the trunk of the tree.

Another sculpture we like in particular is one of San Francis in San Xavier. I had initially dismissed it as, “Oh well, another San Francis (I would argue the majority of colonial churches in South America has one or more)” until Coen pointed out to me.

“Did you see he is caressing a giant anteater?”

In Europe you will find San Francis often in the company of one or more birds, but a giant anteater?

2 thoughts on “Falling in Love – Again; The Jesuit Missions in Bolivia”