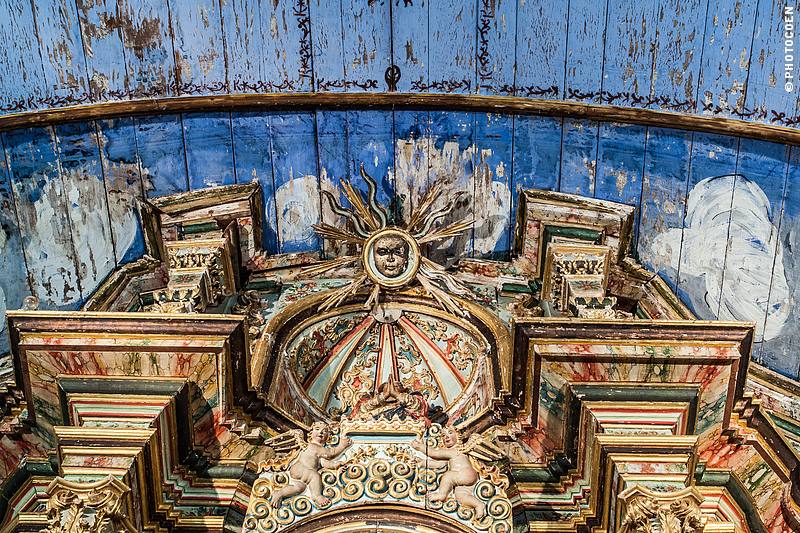 It all started with a photo: a beautiful photograph of an old wooden altar featuring an angel killing a devil painted in blue tinges. Some of the paint had chipped off and the wood was damaged, and it was clearly a piece from colonial times.

Where could I find this beautiful altar?

The accompanying text told me the photo was taken in the Church of San José in Valenzuela. I asked the caretaker of the museum for directions and my partner Coen and I were on our way.

Before we left Asunción, Paraguay’s capital, we stopped at the tourist information office. I had received some information from them about one particular Franciscan church, in Yaguarón, but nothing else and I wanted to make sure we weren’t missing anything.

The tourist information had no other information about Franciscan churches despite the fact that many Franciscan orders had settled around Asunción after 1767, when the Jesuits were expelled from this continent by the pope.

It was time to do some field research ourselves.

Who Are the Franciscans

The Franciscans are members of a Roman Catholic religious order founded by St Francis of Assisi in the early 13th century. They have become known for their work in foreign missions and their focus on education.

Franciscan friars accompanied expeditions of the Spanish colonizers and thus arrived in Paraguay where they founded reducciones, a well-known form of colonization in South America: a settlement under ecclesiastical or royal authority where the indigenous people would be converted, taught and protected.

In return the Indians had to be available for labor. In the churches, most woodwork was done by the Guaraní people who used local plants to make the dyes. Constructed in Baroque or Rococo styles, the wooden structures are elaborately decorated and very colorful.

Here are among the Franciscan churches that we encountered.

Our first stop was Yaguarón, a town 48 kilometers outside Asunción and once a village of indigenous Guaraní people. In 1586 the Franciscan order founded a reducción here, which in time was handed over to the secular authorities. Many of the ancient houses have been demolished but El Templo San Buenaventura (constructed 1755-1772) has stood the test of time and still functions as a church today.

The exterior of the San Buenaventura Church, named after one of the founding fathers of the Franciscan mission, is impressive in its plainness: whitewashed adobe walls lined with colonnades, which are supported by pillars of Lapacho wood. The modest exterior stands in striking contrast to the elaborately decorated interior, overwhelming with the frilly ornaments typical of Baroque and Rococo, and with a beautifully painted cassette ceiling.

The modest exterior stands in striking contrast to the elaborately decorated interior, overwhelming with the frilly ornaments typical of Baroque and Rococo, and with a beautifully painted cassette ceiling.

Two elements stand out: the confessionals and the reredos. Ornamented confessionals are scarce in South American churches – in general they are plain in structure and not painted. All the more fascinating are these creations of art, abundantly embellished with carvings and paintings of flowers. The hand-carved reredos stands out for its size: a fourteen meters high, six meters wide and three meters deep,

2- The Franciscan Church of San José in Valenzuela

Some 80 kilometers east of Asunción we found the village of Valenzuela. It is smaller in size than Yaguarón but more picturesque in character and time seems to have come to a standstill here. Men passed by on ox-carts with enormous wheels while others sat in front of their houses, watching the day go by while enjoying their tereré – a sweet, iced infusion made of herbs.

In the main square we walked to the plain church of San José, their patron saint, with the altar – or more specifically, the reredos – as its outstanding feature thanks to the profusion of intricate carving.

We had fallen in love with Paraguay’s Franciscan churches and were determined to find more. For more than a week we drove in and around Asunción, asking around, checking with church administrators to see who might know more about this part of Paraguay’s history. Finally, in Tobatí the ‘City of Ceramics’ (In the surrounding areas are many ceramic factories where bricks, roof

Finally, in Tobatí the ‘City of Ceramics’ (In the surrounding areas are many ceramic factories where bricks, roof tiles and pottery are manufactured) we struck it lucky.

The church is modern; the old one was torn down in 1940 to make way for a bigger one. Fortunately, they kept the colonial-era altar, confessionals and pulpits, which are all made of wood, covered in gold paint and featuring saints.

We met the former priest, now retired. The octogenarian was a passionate storyteller, telling us how he was trying to get the altar and other woodwork restored which are seriously affected by longhorn beetles. His major obstacle was, not surprisingly, sufficient funds.

The priest not only offered me a book he had written about Tobatí’s history, called Tawa Pueblo Ciudad, but also explained where we could find more Franciscan churches. ​Although some of them were torn down and rebuilt in the last century, ancient carved wooden side altars, reredos,

Although some of them were torn down and rebuilt in the last century, ancient carved wooden side altars, reredos, pulpits and confessionals have been preserved and remain as magnificent pieces of art. Among the ones we found are:

The village of Emboscada has a Franciscan church dating from 1774, dedicated to San Augustine, who features as one of the statues in the reredos. The church stands out for its fine carved doors, shutters and beams as well as the soft colors used to decorate the wooden altars in flowery designs.

The church is damaged by vibrations caused by heavy trucks passing by and the congregation hopes to restore the church soon with the help of an Italian program.

In the town of Capiata, the 18th-century church is surrounded by schools and a soup kitchen run by the Catholic Church, and the area around the church has been turned into a playground for the school children.

Among the church features: the polychrome pulpit and reredos, the latter featuring La Virgin Candelaria, and San Miguel defeating the devil.

Altos was founded in 1580 by the Franciscan Friars Luis Baloños and Alonso, and largely renovated in 1989. Unfortunately, the town lacked funding for the restoration of the dark, soberly colored altar and reredos, where the harmful effects of termites are clearly visible.

Notable are the alcoves along the altar, not found in other Franciscan churches.

This picturesque town has a renovated church, which still features an 18th-century carved wooden altar, an enormous reredos and two side altarpieces. Painted against a bluish and reddish background, the gilded flowers and grapes stand out. The colors of the pulpit and confessional have almost faded away.

We had the time of our lives, thoroughly enjoying every single moment searching for these hidden treasures and being ecstatic each time we found another one. We returned to Asunción, handed our information to the tourist information with the suggestion to develop a Route of Franciscan Churches. Who knows, when you get there, that’s what they may have done.

Practicalities Information on the Franciscan Churches

2 thoughts on “In Search of Franciscan Churches in Paraguay”