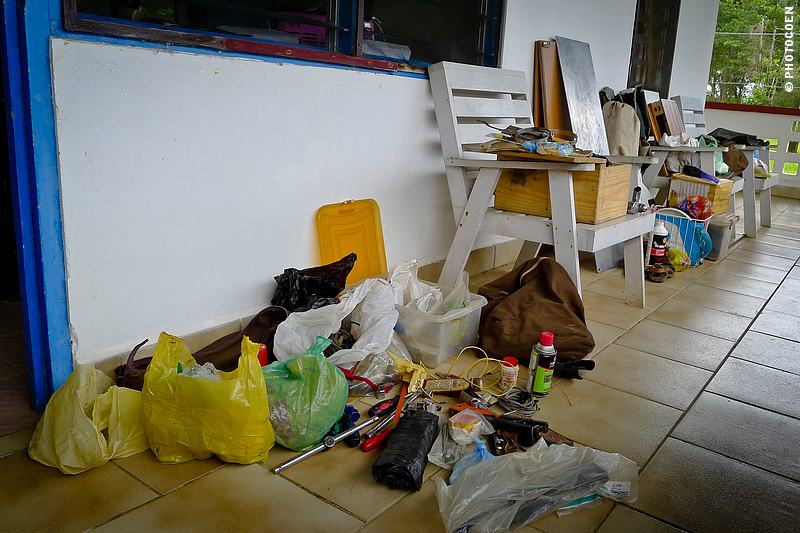 “Every increased possession loads us with a new weariness”
~John Ruskin

“Just throw it away,” I tell Coen whenever he returns with yet another gadget he received at a workshop. “No, I’m sure I can make somebody happy with it,” he will answer.

So, there you have it, two solutions: Throw it away or Give it away

If it were so simple, I wouldn’t be writing this blog post.

There are various inspiring blogs on creating space in your house, like Courtney Carver describes in her How to Live in the Land of Enough – Space. By the way, if you need help just cleaning out your closet, check her Minimalist Fashion Project 333 Begins.

Too Many Souvenirs & Too Many Presents

But how do you get rid of stuff when traveling? When your backpack has become a burden, your suitcase no longer closes, when your bicycle has become too heavy to peddle, or – as in our case – we can’t move around in our car anymore?

We travel to enjoy, right? How much joy is there in carrying around all that stuff, in worrying about all that can get stolen? None at all. When packed with care, this shouldn’t be a problem (albeit a challenge for many, as Jill Browne so aptly describes).But on the road we buy souvenirs, some more clothes or get presents from people we meet. All is well until that moment you realize: some of this stuff has to go!

But What? And Where to?

After having lived in Suriname for a year or so, we spent several days cleaning and sorting our possessions before hitting the road again. On the road, I do this regularly as space in the car is limited, but since we had a home in Suriname, that stack has grown like Jack’s Beanstalk:

I’m very much a fan of throwing stuff in the garbage as I quickly feel that I am only burdening somebody else by giving him/her my possessions. We often receive promotional gadgets, which are presented as gifts, but which to me are junk. I don’t like to pass on junk, so I throw it in the garbage can.

Coen, on the other hand, likes to hold on to things. I remember a couple of years ago a good friend of ours gave Coen a new Garmin GPS. Coen was thrilled.
My immediate remark was, “So we throw the old one out.”
As usual Coen replied, “We’ll make somebody happy with it.”

That doesn’t always work for me. I generally have not enough patience to let stuff lie around until Coen’s right person comes along, as he just as easily forgets about it and the item never goes. However, in this particular case, I agreed with Coen that ditching a still good GPS didn’t feel right.

2. Do we make somebody happy with it?

When we returned to Bolivia a couple of weeks later, we met a young couple that was preparing a journey to the Salar de Uyuni (readhere and here)with their Volkswagen Combi, which constantly broke down. Southwest Bolivia is serious off-the-beaten-track business where it is not a matter of course you’ll find your car back after you’ve walked to a town for hours to get a mechanic to help you because you got stranded. They had no GPS. Our old GPS was a perfect tool to hand on to others who could use it. I felt good about that.

On the road I find it generally easy to swap with, or give away to, fellow travelers. We understand each other’s needs, see what somebody has or doesn’t have, and it’s easy to see if some of my stuff could be useful to somebody else.

3. Do we give it to a person without knowing whether he/she wants/needs it?

Do you recognize those feelings?

I’m not talking about when you know a person, have formed a friendship and just see or know that this person can use that particular item you no longer need. Then it’s just a friend giving something to a friend, and differences in material wealth have become irrelevant.

One thing I learned on the road is that sometimes there are sensitive (cultural) issues we may not be aware of. For example, how in Suriname many people won’t wear second-hand clothes, no matter how poor they are. They are afraid the clothes are inhabited by wintis (spirits) that could harm them – the previous owner could have asked a shaman to put those wintis there exactly for that purpose.

Some countries have the practical solution of second-hand stores, where we can take our still usable and sellable stuff. Others don’t.

Here’s what I’ve learned to do when I don’t have a perfect gift opportunity like the above-mentioned GPS in Bolivia:

I then have faith it will find its way to somebody who needs it.

The result of this solution is that I don’t give junk, or what I consider the too-old-to-pass-on stuff to somebody else, yet acknowledge that while I don’t want/need it, others may feel differently. If a person rummaging through the garbage is happy with those things, then it’s up to him/her to take them.

In Bolivia, after the overhaul of the Land Cruiser 2 years ago, we had one of these major cleaning sessions. Garbage disposal points in La Paz are the electricity poles on the pavement. One morning I filled two bags: one with trash and one with reusable stuff. When I returned twenty minutes later to put down the second batch, the first stack of reusable stuff had already been taken away.

In Suriname we repeated that course of action, which went extremely well. Now, three months down the road I have yet another cleaning session here in Brazil, as the interior had to be taken out and apart to get some welding done. There’s hardly anything to get rid of this time – which is the best version for me: for the past three months we haven’t accumulated things we don’t need.

1 thought on “Getting Rid of Stuff”