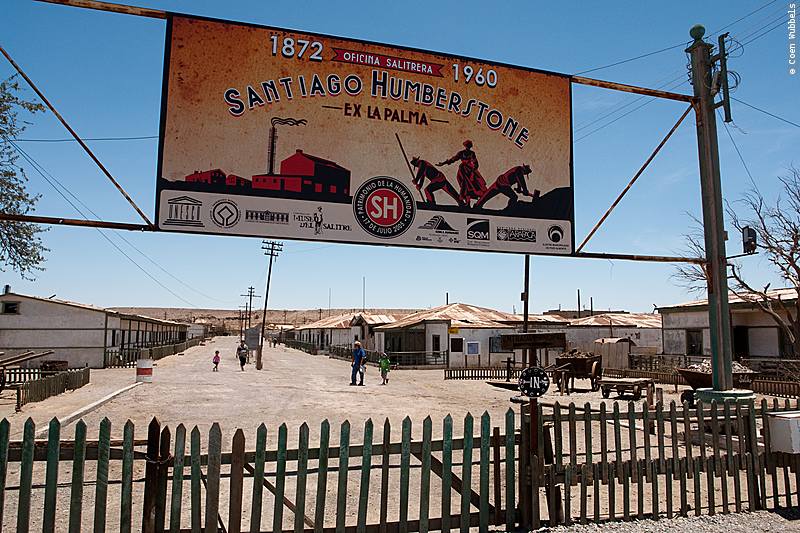 A breeze carried the sound of squeaking hinges and creaking wooden panels. In the overwhelming silence of the desert, the slamming of a metal roof plate echoed as if a gun had been fired.

When listening carefully I heard voices from the past.

Voices that told stories about promised fortunes and working yourself to death under the scorching sun of the Atacama Desert – one of the driest deserts on earth and, around 1900, home to Chile’s nitrate boom.

The Nitrate Boom in Chile

Nitrate extraction began in 1812 with the opening of 8 mines in west Peru. During the Pacific War of 1879, Chile annexed territory from Bolivia and Peru and as a result obtained the nitrate monopoly. Around 1910 the nitrate industry was at its peak with 170 mines in operation, annually producing 3 million tons of nitrate (80% of all Chile’s taxes came from the nitrate industry).

It gave economic prosperity to 200,000 people who lived in mining towns spread over the Atacama Desert.

Chileans thought this wealth would last forever, which wasn’t such a strange idea considering the fact that Chile was the only country in the world with a nitrate-rich soil. However, eternity stopped around World War I, when the Germans no longer had access to Chile’s nitrate supplies and looked for alternatives.

Germany’s invention of synthetic fertilizers led to the collapse of Chile’s nitrate industry. Between 1914 and 1960 the majority of nitrate mines closed down and most workers moved to cities along the coast or to Central Chile.

The Prosperity to Ghost Towns

The abandoned mines quickly turned into ghost towns, many of which were stripped down; metal brought money in the bank and wood served as fuel. Fortunately, some people realized the value of these sites and fought for their conservation.

The mining towns of Humberstone and Santa Laura are by far the best-preserved towns of the saltpeter era; they were declared national monuments in 1970 and designated UNESCO World Heritage Sites in 2005.

The Factory of Santa Laura

In Santa Laura, constructed in 1872, I visited the small museum displaying household appliances and, more interesting, fichas. These tokens made of rubber, aluminum, brass or cardboard took the place of cash and were worthless elsewhere. Mine workers could buy goods only in the nitrate town they lived in and, until 1924, only with these fichas.

The rusted remains of the carcass and machinery of what once was a major saltpeter plant whispered of prosperous times; explanatory panels gave me insight into the manufacturing process. Outside I followed the narrow-gauge railway over which the raw material (caliche) was transported. I tried to imagine working here, in the heat of a factory amidst the scorching heat of the desert. How much heat can a person stand?

La Torta as it was called locally (the Pie), is the hill adjacent to the town that is a result of all the debris that was left over after the nitrate had been extracted from the caliche. From here I looked down on Humberstone (originally known as La Palma), which housed 4,000 workers and families (Santa Laura numbered 450).

The nitrate companies provided housing, food, health care and household goods for their workers. I walked down and strolled among rows of small, identical houses laid out in a grid pattern and checked out the restored church and theatre. Decrepit tennis and basketball courts reflected the popular sports of the former inhabitants. The now drained community swimming pool revealed its origins: the cast iron hull of a ship wrecked in the port of Iquique.

Destruction in the Atacama Desert

Back on the Pan Americana I realized that the reminders of the saltpeter industry are not only evident in these ghost towns but also deep in the Atacama Desert. Along the side of the road were large stretches of soil that had been turned up to reach the nitrate-rich caliches, and, of course, these areas were never brought back to their original, smooth state.

To fuel the ovens large parts of the Tamarugal Forests were cut down, which proved an ecological disaster. I turned around and drove north again to check out the desolate town of Pisagua, one of the port towns to which the nitrate was transported from where it was shipped to the rest of the world.