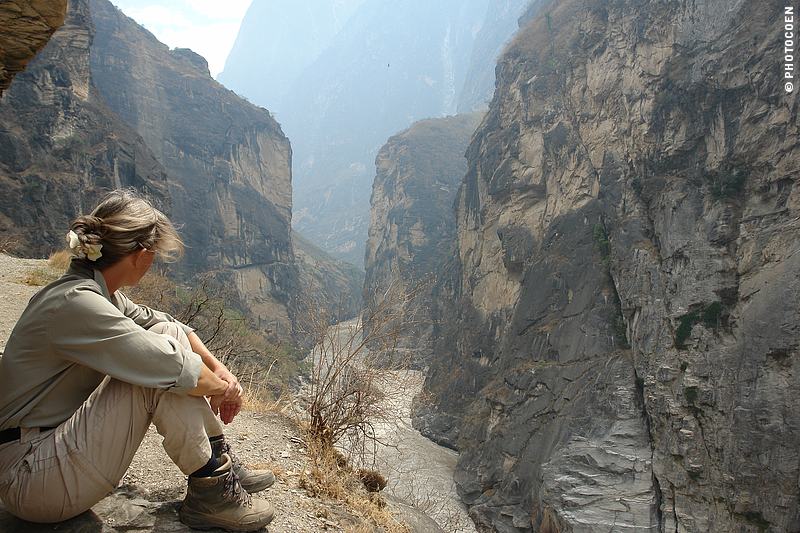 There wasn’t just one stone – there were two.

Which one did the tiger jump on when crossing this gorge?

Tourism was booming in the Tiger Leaping Gorge, which made me wonder why there wasn’t a panel pointing out which stone was linked to the legend of the leaping tiger.

The legend is simple: There is a rock at the narrowest point of the river (some 100 feet) and once upon a time a tiger used this rock to leap across from one side of the canyon to the other side when trying to get away from a hunter.

Maybe once those stones were one? Or maybe the water level was higher and there was only one stone when the tiger jumped? Who knows? Right now there’s nobody to ask. The famous stone lies 1600 feet vertically down from Tina’s Guesthouse, which is one of the many along the trail that meanders some 15 miles along the Tiger Leaping Gorge. The trail has existed for ages, connecting villages in this mountainous region of Yunnan.

The bus from Lijang had dropped us off at the entrance of the gorge two days earlier. A two-hour, pleasant walk through quiet villages and terraced farm fields brought us to Naxi Guesthouse. We could have walked on for another couple of miles to the next guesthouse but decided to stop here and take in the views of the snow-capped Five Finger Mountains, the highest of which reaches some 19,000 feet.

“The view never tires,” the owner commented as he joined all hikers in the daily ritual to stand in awe and watch the mountain range transform by a kaleidoscope of pastel tinges as the sun went down.

From Naxi Guesthouse we followed an easy-going trail through more farm country, which was good to warm up our muscles for the subsequent steep and strenuous climb with its 28 bends, which brought us to the top of the trail at 8,500 feet. The views compensated for the hardship. We looked down the gorge, where the river forced its way between the vertical walls with rapids and whirlpools.

Birds, crickets, butterflies and lizards all accompanied us with their concerts. We walked down below shady trees and other vegetation until we reached Halfway Guesthouse, which indeed lies halfway the trail. Detail: the guesthouse is famous for the fantastic view from its bathroom.

From the main trail are various side trails leading down to the depth of the canyon. We followed a slippery, muddy path until we could touch the water of the Yangtze River. From here it would be just an easy-going, pleasant walk along the river and a short climb up through meadows and villages to reach the end of the trail at Sean’s Guesthouse.

Threats of the Yangtze Dam Project

There was no frothing and spewing river as I had expected when looking down from the trail. Here the water flowed peacefully around the granite outcrops. Nevertheless, I felt Mother Nature’s power in the roughness of the canyon with its vertical walls stripped of all vegetation. The canyon reaches some 13,000 feet deep, making it one of the deepest canyons in the world.

I looked at the granite outcrop in the water, undisturbed. It hadn’t been aware of the danger that it almost got submerged for eternity. Before 2007 this gorge was part of China’s gigantic Yangtze hydropower project, which would have flooded the gorge.

The Chinese did build the highest hydroelectric dam in the world, flooding a huge region and forcing hundreds of people to leave their ancestral homes and farms but, fortunately, this particular part was eliminated from the project after intensive protests (read about it here).

I looked up those vertical walls and shuddered at the thought of how tiny and insignificant we are as human beings when it comes to physical size, yet how destructive our minds and actions are as a species. What price are we willing to pay for having electricity? The thought is mind-boggling.

Practical Information on The Tiger-Leaping Gorge