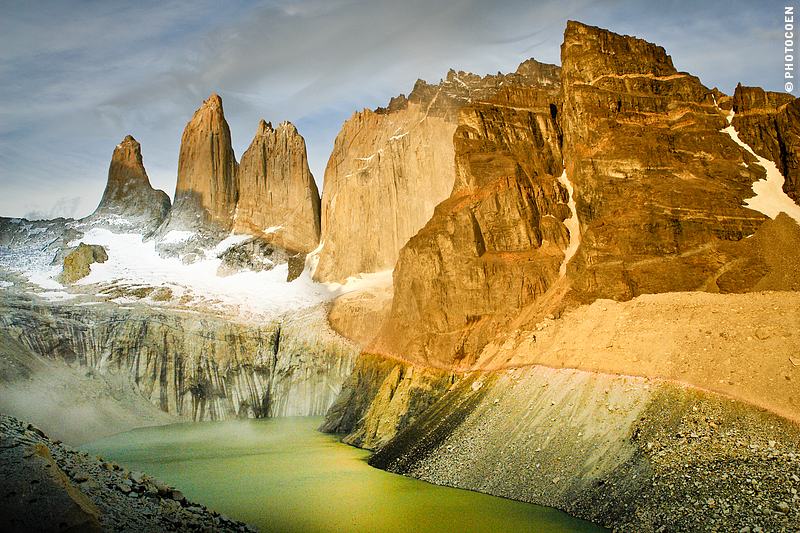 A thick black blanket steadily moved eastwards, threatening to block out daylight and announcing an impending storm. I took short gulps of air, exhausted from having legged it uphill to the 4000-foot John Gardner Pass.

How was it to hike in Torres del Paine National Park?

At the top I was rewarded with a view. However, instead of a postcard image of a snow-white glacier against a cobalt blue sky the weather gods presented me with a blurred world of grey with just enough light penetrating to vaguely see Southern Patagonia’s eerily blue, crevassed ice field and a couple of snow-covered peaks in the distance.

I felt I stood at the end of the world.

Torres del Paine National Park does lie in the far south of Chile – your next destination south would be Antarctica. It one of South America’s most popular National Parks for hiking.

We had started our explorations with a two-day hike to Campamento Chileno. Under a sky of endless blue offset by soft, white streaks, and with views of snow-capped, rugged mountains and cascading rivers this proved a remarkably doable trail through dense forests and open land.

Torres del Paine’s landmark is the jagged, 650-foot-high Torres(towering granite spires) and from Campamento Chileno it was only a short walk before we stood in awe in front of these soaring towers bathing in the light of a splendid sunrise.

Sunrise was followed by breakfast and a couple of hours’ hiking into the Valle del Silencio where we were but tiny dots in a wilderness of exposed terrain above the tree line so vast it made our ears ring. There was no silence, as the name suggests, but the reverberation of rushing rivers, echoes of large chunks of ice tumbling down and​ howling wind. As a gust almost blew me off my feet down a steep hill we decided to call it a day and returned to the base camp near the park’s visitor center.

The hike had been a good warming up for the park’s largest attraction: the 8-day Circuit. It started out pleasantly enough with two days of hiking over well-marked trails through meadows dotted with flowers and flowering grass. Condors scanned their territories for food, mice and rabbits darted across the trails, in the distance grazed guanacos (family of the lama), but our best sighting most definitely was a wolf.

Rain drummed down on our tent all night long; the easy hiking was over. We had a wet struggle tramping through calf-deep peat bogs and stretches of snow. Step by step we zigzagged up, trying hard not to slip on the loose rocks. At the top of the John Garner Pass we added a stone to the cairn, as so many others of us had done before us who felt they had reached a milestone.

I took another sip from the bottle and stared at the almost translucent blue of the Grey Glacier, part of one of the few ice fields in the world that still has growing glaciers. This view, this spectacle of nature had been worth my plodding up, never mind the weather.

To reach Refugio Grey, the next day, we had to cross two ravines damaged by landslides. In between ran ridges with just the narrowest path where gale-force blasts tried to sweep us off the mountain. To cross the ravines we depended on vertical, wooden ladders that had taken a severe beating in last year’s storms.

The inclement weather passed. Sunshine took over, giving the world a much warmer feel and we now regularly stopped for views of the Grey Glacier glistening in the emerald Pehoe Lake. We spent our last night in Campamento Italiano, from where a side track leads into Valle Frances: a spectacular basin in the heart of Torres del Paine’s massif. There remained one leisurely day of walking to our home base, which included tracing the ethereal Lago Nordenskjold, where our car awaited us.