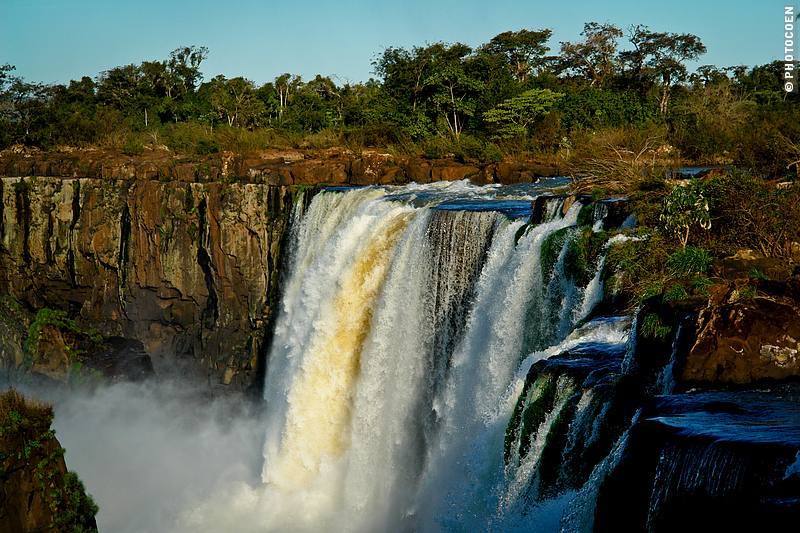 The 275 waterfalls that make up Iguazu Falls lie on the Argentinean-Brazilian border and I already saw them in Brazil. Yet, I wanted to see this UNESCO World Heritage Site from the Argentinean side as well.

These falls have at least one feature that Argentina can brag about: They were the stage for the movie The Mission (1986), starring, among other actors, Robert de Niro. The movie shows the spectacle of this natural phenomenon but even more so gives insight into the Jesuit, close-to-utopia missions in the region, where Guaraní people were invited to live with the Jesuits in reducciónes to be protected against being hunted down by the Brazilian (Portuguese) Bandeirantes (slave and gold hunters).

In Brazil I was overwhelmed by the size and force of the waterfalls (see the photos here). Unless you take a boat ride into the falls, the Argentinean side doesn’t offer such a spectacle.

However, Argentina has focused on the richness of its own surroundings and by doing so assures all visitors of a fantastic visit. I recommend that when you have the time, do visit both sides of the falls because they are two unique experiences.

The falls are part of a national park, characterized by hiking trails into the forest and around the cataracts. I arrived early morning to maximize the chance of seeing wildlife along the Sendero Macuco (sendero = hiking trail). I was rewarded with colorful butterflies, a number of birds and a couple of monkeys.

Around the falls I followed catwalks, which are divided into two circuits: El Paseo Superior (Upper Circuit) and El Paseo Inferior (Lower Circuit). The first leads along the upper rim of the spectacular Salto Bossetti and San Martín Waterfalls while the lower Circuit zigzags to the bottom of the falls, from where a ferry plies to San Martín Island. Note that during high season there is a long waiting line.

Many coatis roam the walkways as well, which are the source of a lot of fun and/or incredible frustration. As I didn’t carry a bag I wasn’t of any interest to these raccoonlike animals but careless, or unaware, visitors who left their bag unattended were. The raccoons hijacked the bags, ripped them open and emptied of their edible contents. They look so cute with their pointed snouts but in reality they are ruthless. Even when shooed away they will sit one or two meters away, simply waiting for the next opportunity.

More peaceful was watching the numerous birds along the trails, which on one side generally lead along forest while offering views of the water spectacle on the other side. I didn’t know the names of all these birds except the well-known macaw, but they were beautiful and largely undisturbed by the presence of people.

I spent a pleasant day taking in all these small pleasures: people watching, the smart raccoons, and the undisturbed, beautiful birds. And, of course, I admired the waterfalls, which are impressive for the vast number of smaller falls that somehow all intertwine.

The most spectacular waterfall is La Garganta del Diablo. The Tren Ecologico de Selva (Ecological Forest Train) took me there, with some hundred other visitors. A catwalk leads along several waterfalls and stops at the Devil’s Throat. Whereas in Brazil you stand in front of it, here I stared down in wonder at fifteen cascades blending into one, creating the most treacherous and impressive fall of Iguazu.

I imagined seeing the spectacle lit by a full moon, which must be one of the most astonishing sights in the world. I had learned too late about it: Later I learned there are full-moon guided tours to the Iguazu Falls. Had I known this, I definitely would have revised our itinerary and arrived two weeks earlier or later.

But then, no matter how much or how long you travel you can’t see it all, can you? And so I put visiting Iguazu Falls during a full moon on my who-knows-maybe-one-day list and returned to admiring the falls as they were: under a bright blue sky.