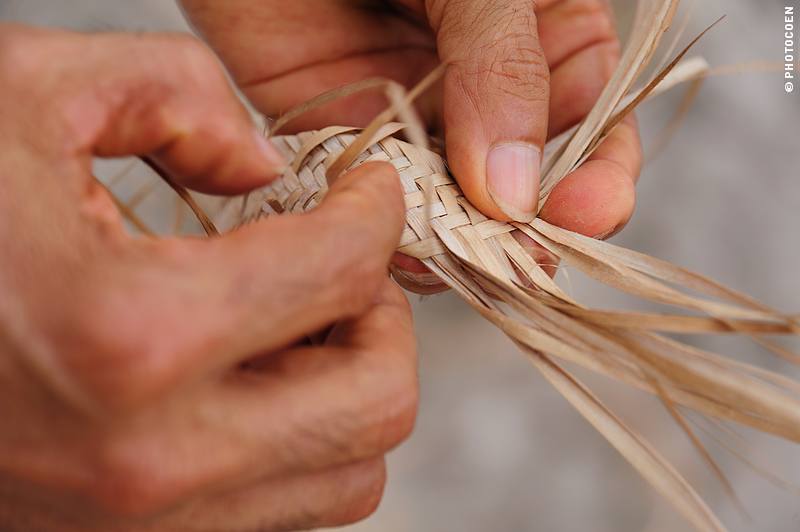 “We would leave on Monday, be gone the entire week fishing in either the lakes or if there was not enough water we’d go out on the ocean and return on Saturday. We’d have one day at home and we were off again.”

With his six brothers and parents, Marinaldo lived on fishing. Day in, day out.

Marinaldo – The Barter System of a Fisherman

Marinaldo grew up in Santo Amaro, a fishing village that until some ten years earlier was largely closed off from the world. The only connection to the city, São Luís, was by boat, a 12-hour journey.

The fish caught was eaten or swapped for f (manioc flour). It was their staple food, together with what nature provided such as coconuts and cashew nuts. Farinha was added to anything they ate: to fish, the shrimp and to their coffee.

“It was the best breakfast we could have,” Marinaldo reminisced. “You could work on that for hours. Or my mother made porridge from farinha and coconut milk, to which we would subsequently add more farinha before eating it. We called it eating ‘farinha with farinha‘.”

To get hold of other products, the fishing families made hats from carnauba leaves (a type of palm tree). Whenever they didn’t fish, they were making hats. Every once in a while a buyer would come from São Luís to swap the hats for a kilo of rice, half a kilo of sugar, a bit of coffee and a liter of kerosene.

“That’s how we lived,” Marinaldo tells me. “My mother would add coconut ‘dust’ (the finest coconut powder left after having grated it) to the coffee to increase the quantity. Of course, it tasted different than regular coffee, but at least we had enough for our large family of eight.”

I’m sitting around the table with Marinaldo, whom Coen and I befriended in the town of Santo Amaro and who suggested to join us for a day to an oasis in the dunes of Lençois Maranhenses National Park. As we arrived in the oases and had lunch with a local family we sat around the table and he shared stories with us about his life here in the dunes of northeast Brazil.

This was the second time in a couple of weeks that I come across a person my age (40s) who grew up with a barter system because money hardly existed during their youth and for as much as it was around, it didn’t really have a value.

Valmir Borges – The Barter System of a Rubber Tapper

Marinaldo’s story is similar to Valmir Borges, whom we had met in the Amazon where he was our guide for a boat trip to the incredibly beautiful, flooded forest of the Anavilhanas.

Read here: A boat ride to the flooded forest of Anavilhanas

He grew up as the son of a rubber tapper. His parents had fled from the state of Acre, where serfage was still common (and still exists today). They settled in the Amazonas, far away from everybody.

“We lived deep in the rainforest, where the sun hardly penetrated the foliage,” Valmir remembered. “When my mother did the laundry and it needed to dry, my father would cut some trees to create an open space, otherwise the laundry would never dry in the humid climate.”

They lived on fish and manioc, like Marinaldo. Also here a vendor would show up every once in a while by boat and swap the harvested latex for the family’s necessities like soap, beans, sugar, and coffee.

There are many similarities in their life stories, even though Valmir lost his mother at a young age and he was sent to the city to live with relatives while Marinaldo lived with his parents until he got married. Neither of them regrets those days, or talk about them with a tone of feeling sorry for themselves.

“This was the life we knew, so we managed,” they both commented on that.

To my question of what they think of tourism as a new source of income for their region, they were very clear, with relief still visible on their faces as they spoke,

“Tourism has been a blessing. Life was so tough, so much on a level of survival. Tourism has brought an income to many villagers and the standard of living has increased enormously.”

These kinds of stories you don’t see from the outside. As travelers we arrive at a village or town and see how it’s developing: mud-brick houses are replaced by houses made of stone. Roads are paved or asphalted and the banners announcing a constellation of tours are hanging all over the place. Litter generally dominates the scenery.

Tourism does not necessarily beautify a place.

I am glad that on both occasions we got to stay longer, spent quite a bit of time with these two men and heard their stories. That, yes, tourism may destroy a lot of traditions, customs, and lifestyles but, as is clear from Marinaldo’s and Valmir’s stories, that this is not necessarily a bad thing.

They get a lot for it in return.