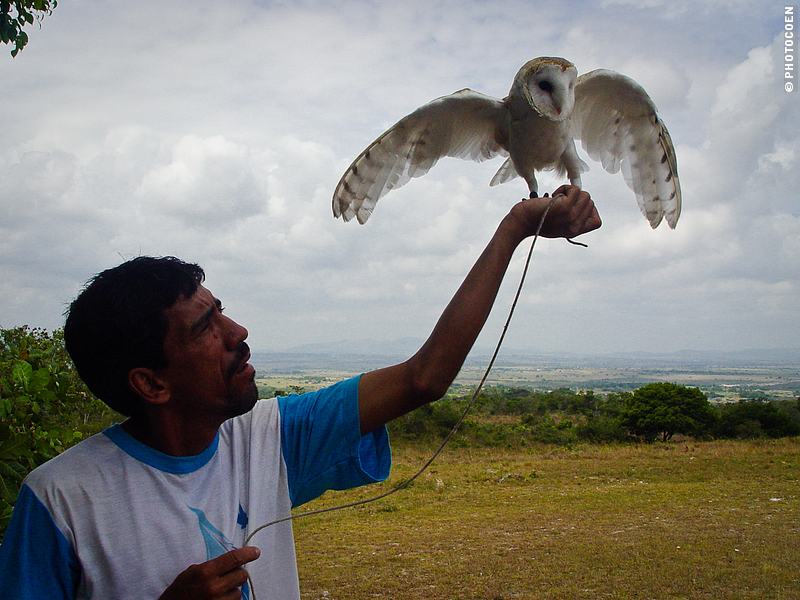 A rough road leads up into the mountains. Apart from a couple of houses the countryside is devoid of habitation. A low, wooden barrier marks the limits of a private property. Behind it, I see rows of small aviaries, a cluster of trees and a house.

Following Brazilian custom, I clap my hands to make my presence known. A lean man with a goatee and mustache appears from the veranda and shakes my hand.

“José Percílio,” he says while stroking the head of a bird that sits on his shoulder. “And this is Tito,” he introduces his 28-year-old gavião caracara.

José’s speech is a mixture of crude, guttural sounds and consonants. Maybe it resembles a bird language, with a Portuguese accent. It is not unpleasant to listen to, but difficult to decipher. It doesn’t help that my Portuguese is limited and he doesn’t speak English.

Had I booked a tour in Sergipe’s capital of Aracaju, I could have come with an English-speaking guide to translate for me – the advantage of that choice now dawns upon me.

The conversation may be progressing with a bit of difficulty, but there is always body language and that is easy to interpret: Percíllio loves his birds. Soon I’m drawn into his world in which his strong movements, intense gestures and warm facial expressions demonstrate his one and only passion: rescuing, loving, and caring for birds of prey.

It is easy to see that the birds are well taken care of – by the softness and cleanness of the feathers, the shiny eyes and heads held up high.

The eggs in one of the spectacled owls’ nests hatched today. Years ago, Percíllio received a chick in a very poor state. It was nursed back to health and stayed alone for 19 years until IBAMA (Brazil’s organization in charge of protected flora and fauna) brought a female with only one wing to the park.

The couple has since produced 14 young, 6 of which have been released into the environment with a chip for tracking, and appear to be surviving. The others have either been given to zoos or conservationists.

I have arrived unannounced, not knowing that reservations are mandatory. Percíllio is kind enough to show me around along the dozens of cages and telling his tales. Had I been with a guide, though, I would have seen one of his presentations on how he trains birds of prey to return to the wilderness. But being on my own has its advantages as well: I’m handed numerous birds to hold.

Percíllio takes an adult spectacled owl out of the cage, whispers to it and sets it on my arm. The claws are not as sharp as I had thought they would be, and the bird is totally undisturbed by the move. Throughout our walk I’m handed different owls and instructed to stroke and cuddle them.

“They love that, they want attention,” Percíllio emphasizes.

I had no idea that birds and men could bond so strongly. Birds lean towards Percíllio, simply asking for a kiss.

How did it start? How did this intriguing man become the owner of 17 hectares and caretaker of 300 types of birds, an anteater and Bambi – a fallow deer a couple of weeks old?

When Percíllio was seven, he was given an egg. Percíllio put it in a hen’s nest and, on his birthday, Tito was born – the bird I met on arrival. Percíllio’s love for birds of prey had begun.

What started as a hobby grew into a way of life. He is unmarried and his life is dedicated to birds of prey. Parque dos Falcões (Falcon Park) falls under the supervision of IBAMA, which not only makes sure that Percíllio operates according to the law, but also brings him birds that have been confiscated from traffickers.

Most of these birds have been abused, injured or were illegally kept. For lack of space elsewhere, Bambi and the anteater were brought here as well. There is a superstition in Brazil that when a barn owl flies over a house and screeches, someone in that house will die.

For that reason a lot of owls are injured by people throwing stones at them to drive them away. If possible the animals are returned to the place where they were found, or close to it. If they are unable to survive in the wild due to their injuries they are kept at the park for breeding.

“So, who pays the bills?” I ask him after he has explained that he receives no government funds. He needs 120 kilos of food on a weekly basis to feed all animals.

“Enterprises hire me with my birds to help them out,” Percíllio explains. “Many, among which are herons, sparrows and pigeons, cause trouble to these enterprises. They destroy crops, disrupt activities at factories, or cause aircraft accidents near airports.”

In fact, when I emailed Percíllio later on, I had to wait for an answer since he was on a mission to chase away the large number of swallows that was invading an installation of Petrobras – Brazil’s oil company. Percíllio offers an environmental control of pests while he himself has found a way to pay his bills.

After our two-hour walk Percíllio tells me one more story, but I can no longer follow what he is saying – I am too tired. I understand the words eggs, monkeys and tape but their link remains a mystery.

The next morning I meet a good friend of Percíllio: Peter J. Ellice, a Brit who made a film about the park to help promote Percíllio’s admirable work (watch it here). Among other things, he filmed the birth of perna longa falcons, which is sold on DVD at the park. I ask him about the story of the monkey, two eggs and tape.

“Ah, that one,” Peter laughs. “You know, Percíllio will try anything to save a bird’s life. One day a saguim – small monkey – had found its way into a cage and ate a bird’s egg and cracked another. Percíllio tried to save the latter by putting a Band-aid over the crack and put it back in the nest. 35 days later, it hatched.”