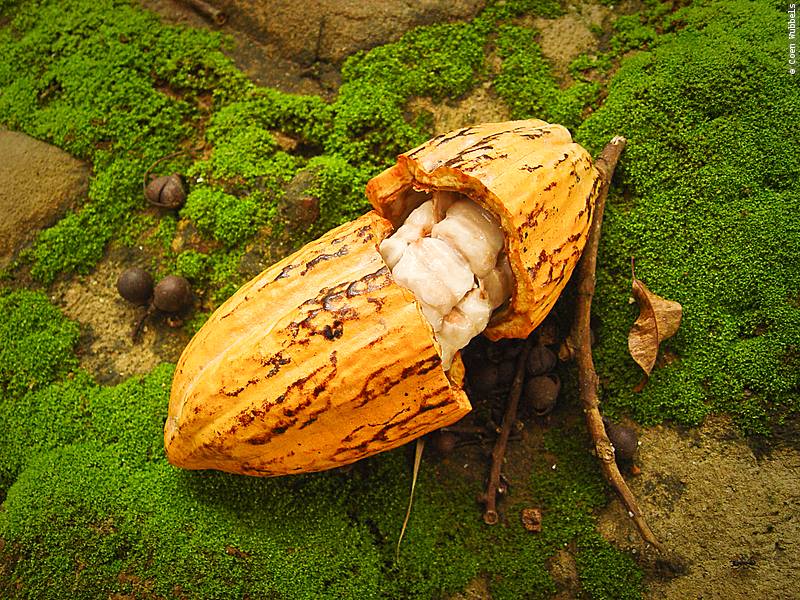 Paying 5 euros (6 US dollars) for a chocolate bar?

What kind of price is that?

Yves Delecroix’ presentation of his chocolate making process came with une dégustation – a tasting of his homemade, organic chocolate. You don’t need to be a connoisseur to immediately appreciate this pure chocolate, made with 72% cacao.

Suddenly 5 euros is not that bad a price to pay.

This dégustation, together with a stroll around the cacao plantation was one of our highlights when traveling in French Guiana.

The Cacao Plantation of Walapulu

Coen and I stood at the entrance of the Fort Diamant trail along the Atlantic Coast close to Cayenne, French Guiana’s capital. It was Saturday afternoon, four o’clock, when Yves Delecroix walked up to us, shook our hands and welcomed us.

Together with five other visitors we walked 300 meters up the trail where Yves had put a couple of wooden benches in a shaded corner to give his weekly cacao presentation.

We were the only Dutch in the company of French, and Yves speaks only French, however, he adjusted his speed and choice of words so we could follow his story. He is a compassionate man who after retirement – at the age of 52 – was too young to twiddle his thumbs and he shared his two ‘legends’ about how he became a cacao plantation owner:

1. He had eaten some cacao beans and thoughtlessly thrown the seeds in his garden. A cacao tree came up right around the time he was asking himself what he would do after his retirement. Growing cacao beans had become the answer.

2. He came across a cacao tree in the rainforest and wanted to pick the ripe fruit. Next to it, however, lingered a fifty-centimeter-long anaconda. “So here was the (forbidden) fruit, the snake and I – Adam,” he explained his unofficial version of how it all started. His quirky sense of humor returned throughout his detailed talk.

For historians, or those interested in the history of French Guiana, Yves has fascinating tales to tell. He described how he became the caretaker of the cacao plantation which at one time belonged to the eccentric owner Artur, who lived here in the 18th century.

Before Artur, Jesuits cultivated the same hill. Remains of old buildings have been restored and are open to the public. These remains are part of the Fort Diamant Trail that leads from this hill into the rain forest.

“There is no sense in competing with the existing cacao market, which is led by West Africa,” Yves explained. “I focus on one particular cacao plant, the local cacao spontané de Guyane, which only grows in French Guiana and yields​ high-quality cacao and thus chocolate products that melt in your mouth.”

It was fun to listen to his trial and error tales about how Yves had grown into the chocolate production. About the obstacles he had to conquer because he didn’t produce enough cacao to buy machines, and so mostly processes his cacao by hand. Imagine stripping every cacao seed of its slimy substance by hand in order to reach the heart of the cacao. That’s what he does!

At last, the tasting! We indulged, let the chocolate melt in our mouths, appreciating the strong, intense taste that, contrary to what I expected, wasn’t as bitter as some of the industrial black chocolates I have tasted. It is a natural product without any additives: 72% cacao and 28% sugar.

Yves has been experimenting with variations on his chocolate in the same playful way as he tells his story. “I thought to add something for the carnival, to give the revelers more energy,” he says. So he added guaraní, a plant found in Brazil and known for its stimulating effects. His different types of chocolate bars became a success.

And so, during our tasting, he had only two bars to sell – he was out of stock. Although the fruit can be harvested all year, the cacao plant has two peak seasons: June and November. On his Walapulu website is a list of shops that sell his chocolate (check the airport store before and/or after your trip!).

The Hunt is On!

One question remained: Walapulu? What is the origin of that name?

“Walapulu is the name of the tribe that lives in the southwest of French Guiana, where the cacao spontané plant was found. They, however, don’t call it cacao, but walapulu; their tribe is named after the plant.”

The next days seven foreigners hunted the stores to find Yves’ last stock of chocolate bars, calling up visions of the chase of the golden ticket in Charlie and the Chocolate Factory.