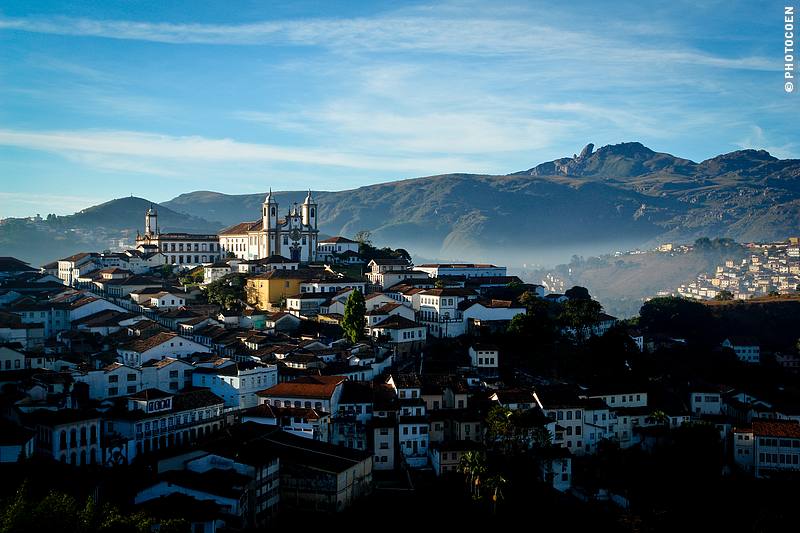 From Gold to a World Heritage Site

From Ouro Prêto, a quinto do ouro (‘royal fifth’) was transported over some 1000 kilometers via the Estrada Real (Royal Road) down to Paraty, west of Rio de Janeiro, from where it was shipped across the world.

The mines were depleted around the end of the 19th century, the state capital was shifted to Belo Horizonte (1897) and Ouro Prêto fell from 110,000 inhabitants to the current 80,000. The town preserved its colonial flavor and in the 1980s became Brazil’s first UNESCO World Heritage Site.

What made my visit to Ouro Prêto special? What stood out most? Why did I visit this colonial town twice, and am I certain that one day I’ll return once more? Was it the twenty or so Baroque-Rococo churches, and if so, was there one I preferred?

Or was it the well-set-up, informative museums? The details in architecture maybe, like the charming keyholes? The scenic, cobbled streets lined with tile-roofed, colorful houses lined along the meandering hills?

Ouro Prêto was all I mentioned above and more. It was about going back in time, about suffering from sore legs when toiling up and down those slippery streets to admire the architecture and take in the views of the countryside, and getting a strained neck from checking out all those expressive ceiling paintings in churches.

Visiting Ouro Prêto was about not having enough space on my memory card even though taking photos inside most churches and museums is prohibited. Visiting Ouro Prêto is about marveling at what you see on every single inch you walk and every minute you sit down.

Despite my being enchanted by the entire town, I would like to point out two highlights: Aleijandinho’s masterworks and a unique museum of oratories.

Brazil’s most famous sculptor, woodcarver and architect is Antônio Francisco Lisboa. He is better known as Aleijadinho, which means Little Cripple – a nickname he got after he lost his fingers and toes as well as the use of his lower legs. Ouro Prêto was Aleijadinho’s place of birth and he was buried in the Matriz NS da Conceição Church.

Aleijadinho’s most important work in Ouro Prêto is the Church of São Francisco de Assisi which was built from 1766-1802. He designed the building and also worked on the carvings of the exterior. Among its features are:

Read about Aleijadinho’s masterpieces, the Prophets of Congonhas, here.

I have visited many museums of religious art during my travels in Brazil, however, none comes close to what is displayed here: some 150 oratories, which are niches or cabinets with religious images. Some are small or even miniature private chapels people used for praying if they were unable to go to church.

Not surprisingly, among the smallest ones are the so-called ‘traveling oratories’, to be taken on a journey and easily carried in a bag or around the neck. The neatest one I saw sat in the shell of a bullet. What a pity it’s not allowed to take pictures here!

The use of oratories was brought to Brazil from Portugal and developed according to local customs and traditions. The wealthy owned polychrome, ornamented ‘salon oratories’. ‘Alcove oratories’ were traditionally passed down from mother to daughter while ‘convent art oratories’ circulated among religious houses and strong believers.

Here’s the story I liked best. There used to be oratories outside as well, for example in walls of buildings or on corners of streets. Apart from their religious purpose they served as waymarkers for travelers.

However, they were taken down once the government discovered how they were misused. Bandits used them to indicate the direction of a gold transport; the caretaker of the oratory would turn the statue so that it pointed in the right direction.