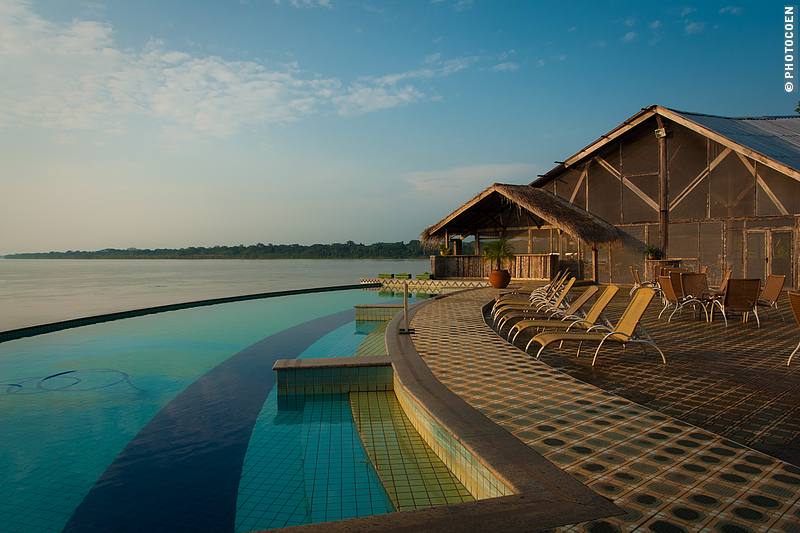 For weeks we had been traveling through the Amazon Forest in Brazil. Some areas consist of virgin forest, but large parts have made way for cattle ranching. The region is known as the Arc of Deforestation.

We were ready to see some wildlife again.

Then we met Paulo…

From Mato Grosso we had entered Rondônia, the state where in the 1980s each minute an area the size of a football field was deforested – 24 hours a day, 7 days a week, for a period of 10 years. The speed of cutting down forest has diminished, but deforestation is an ongoing process.

Rondônia was our border crossing into Bolivia, but that step was delayed as Coen got dengue. For a week we stayed in a hotel where he slept close to 24 hours a day for a week.

In this town we met Paulo, who invited us to stay at his lodge: the Pakaas Jungle Lodge. We had seen pictures of it and took up this invitation with pleasure.

The Pakaas Jungle Lodge, constructed on an eight-meter-high stilts (called palafitas) in Guajará Mirim, offers a dazzling view of the confluence of the black-water Pakaas River and the white-water Marmoré River along the borders of Brazil and Bolivia.

It has two kilometers of canopy walkways for wildlife spotting, and organizes boat trips to Warii indigenous people and the Seringal, a rubber plantation. By the way, thanks to the (acid) black water river, the place is blissfully free of mosquitoes.

Paulo used to come here as a kid with his grandfather to go fishing. Later, when he had his own family, he lived in Brazil in different places. However, he discovered that it was here, at the Pakaas Jungle Lodge, where his heart lies, and so he returned.

Rondônia lies far away from the typical tourist itinerary and as a result Paulo focused more on the Brazilian than the international market. Things may change though, as the Rondônian government is working on opening up the state for international tourism. There is enough to see, like the old narrow gauge between Porto Velho and Gujara Marijim, a couple of natural reserves, and indigenous villages that wouldn’t mind opening up for tourism.

We hope it will work out, because the lodge is a unique place to stay.

Viewing Wildlife at the Pakaas Lodge

Pacaas is the name that the Brazilian explorer Rondôn (begin 20th century) gave to the region, probably because there are so many pacaas – a small rodent that is reminiscent of an agouti but which has white dots on its fur. He came here twice: in 1906 to determine the border between Brazil and Bolivia, and once more in 1930. Interestingly enough, the indigenous people also call an animal ‘paca’, but it’s a different animal.

The circular lodge is unique in its construction. From the open-air swimming pool we had a panoramic view of the confluence of the rivers, where around sunrise and sunset freshwater dolphins sometimes gave a show.

With its 28 huts the lodge is quite large, but it doesn’t feel that way at all. Being used to sleeping in a tent or in our vehicle, it was quite a difference to now have a comfortable furnished room with a king-sized bed, air conditioning and hot water. The huts are covered with pachiuba palmeiro, the leaves of a palm tree that grows across the river, in Bolivia, and the huts are built in the style of the neighboring Warii indigenous people.

Each morning we got up around sunset, had a cup of coffee and strolled the canopy walkways. It was such a pleasant way to start the day. Right outside our hut we admired little, red-brown birds with a long beak like a kingfisher. One has a nest inside a huge termite nest and we watched for hours how they flew in and out; a magic sight.

The walkways, made of beautiful Itauba and Maçaranduba wood, meander through the forest but also through a marshland kind of area. There we saw totally different birds as well as monkeys (macaque pregos), big lizards and coaties. Together with the dolphins and giant otters we spotted in the river, we felt privileged indeed.

The only thing we missed – a funny one, really – was the life of tiny insects and spiders we otherwise search for in a forest. Of course they are still there: not on the walkway, but a couple of meters below us.

Oh, and quite impressive was the sloth that inhabited a tree in the middle of the parking lot, as well as the iguanas in the bushes that got us in the game of “who sees it first”.

When the weather was good enough for a boat trip, we were quite excited. We didn’t get that far though. We reached one of the villages of Warii indigenous people where we could walk around for a bit, talk to the people and admire their handicrafts. However, when we continued our journey the engine broke down.

Our guide couldn’t get it fixed and in the end we were towed by a local boat. As we tend to say in such moments, “Oh well, that will only give us a reason to return one day and explore more.”

Additional Reading about Accommodation in Brazil