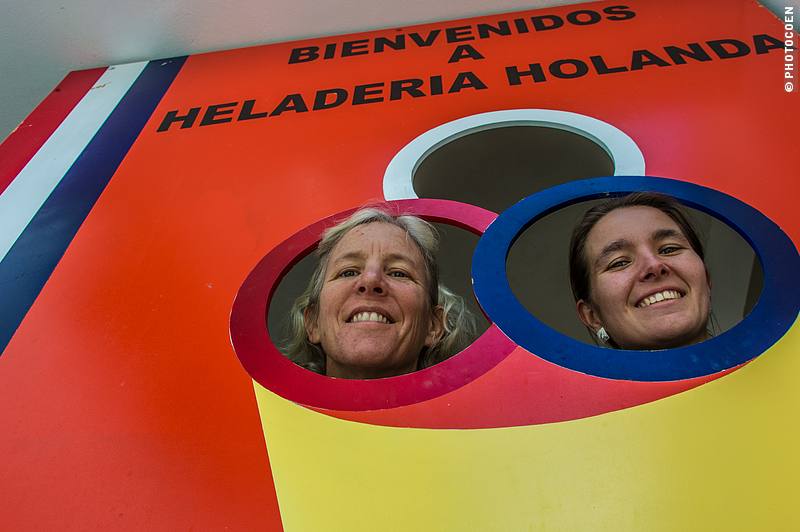 Several travelers and locals had mentioned it to us: Heladería Holanda, an ice cream parlor in Cajamarca. Since the owner is Dutch, and so are Coen and I, it made sense to visit it when in Cajamarca.

What is it about wanting to connect with your countrymen when abroad?

Cajamarca is home to Heladería Holanda’s first ice cream parlor. They can’t hang a Dutch flag outside or color the outdoor walls orange because the building is part of the national monuments that characterize a city. I have to say, I love it when a city is strict on banning all kinds of neon or otherwise ugly advertisements – it makes a place so much nicer and friendlier to wander about.

The entrance is a narrow hallway, after which we immediately recognize ‘home’. Not so much because of the ice cream, which invokes more an Italian association, but for the orange-colored walls and posters featuring the Netherlands. The employees wear orange shirts and caps. Both are women, and later we learned that a large part of Holadería Holanda’s staff consists of single mothers. The second group of employees is deaf people, about which more later on.

We asked for Pim, the owner, and we were lucky; he was there. This is not self-evident because this man runs some ten ice cream parlors, a coffeebar-cum-hostel, is a member of the Chamber of Commerce and does another dozen other things. During our chat it became clear that we had met an incredibly friendly and inspiring person, while he realized we’d love to see more of Cajamarca than just the tourist sites.

“Come back on Monday, I will show you the ice cream factory,” he suggested.
That, of course, was no problem.

Pim lived in Ecuador for a couple of years, came to Peru, fell in love, and stayed. His wife, Luz Marina, is a veterinarian with a specialization in cows/milk/milk products. It was obvious that they were going to start a business with this knowledge and they chose ice cream. While Luz Marina is in charge of the operational side of the business like making the recipes and quality control, Pim is the financial man and manager of the team.

About ten years ago they started making ice cream in their first ice cream parlor, but demand grew and they decided to buy a piece of land and built a factory with a couple of ice cream making machines on the outskirts of the city. We couldn’t enter the kitchen of course because of hygienic rules, but we could look into the kitchen through a window from another room on the second floor.

Their ice cream has become a success and questions, demands almost, from all sides are pushing Pim and Luz to produce more, to produce for supermarkets, for other cities in Peru, to start a franchise, you name it. Many claim they make Peru’s best ice cream. However, Pim and Luz Marina realize that their success is largely a result of dedication, of being there every single day, and have not yet decided how big they actually want to grow.

They produce twenty kinds of ice cream. Many are based on local fruits like sauco and lucuma that they buy from farmers according to a Fair Trade philosophy. They can produce many more kinds but don’t do so very often because, as Pim explained, “If I add a new flavor, I’ll have to take out another one and invariable I’ll get an unhappy customer who is missing his/her favorite flavor.”

Apart from running a profitable business, Pim and Luz Marina took on a social project: working with deaf people. In Peru, deaf people are still underdogs and in most cases sit at home, doing nothing. Pim and Luz Marina have eight deaf people working in their factory and ice cream parlors. Word has gone around, and deaf people from other cities have moved to Cajamarca because they heard there were jobs for them.

Pim tries to find work for them through his contacts with the Chamber of Commerce. “It isn’t evident,” he said. “Even if I can convince the boss to work with a deaf person, he or she then has to be accepted by co-workers, who are totally unfamiliar with working with a deaf person, and may not be interested at all.”

While we are tasting an ice cream that was produced only minutes ago, Pim passionately tells about the factory and their social project. For example, according to the Peruvian law, a child with only one handicap is not allowed to go to a special school but has to go to a regular school. The problems can easily be imagined.

A class with thirty kids and a deaf kid is added to the classroom. How does a teacher manage that, who most likely has no experience with this whatsoever: Put the kid in front of the class and hope for the best.

It’s a long story, but Pim and Luz have an employee called Pedro, a deaf man. He now circulates among schools with deaf kids and one hour per week he will work with each class that has a deaf child. Not just with the deaf child, but all children and the teacher. He teaches them sign language and talks about things like bullying. After three months that class visits the ice cream factory.

“An amazing thing happens,” Pim explained. “Suddenly the kids see that the deaf kid is the only one who could communicate with the ice cream factory workers (both of whom are deaf). They realize that this deaf boy/girl brings them to ice cream and that they can learn a new language. And from that moment on the deaf child has friends in his class.”

Above the factory is a room dedicated deaf-people meetings. This can be social gatherings, or this can be to give classes to adult deaf people, with or without their families, friends, employers, co-workers​ etc. For example, they are now working with very young children, who can still be taught to speak instead of depending only on sign language.

There have been visits from Dutch deaf people, which was a success. The Peruvians learned that as a deaf person you can be independent, have a job, have a cell phone, etc. Suddenly they became motivated to study and find jobs as well!

Truth be said, I can go on for hours on this fantastic story. It was an incredibly inspiring morning. Pim, thanks again for your time, and keep up the good work and dedication!