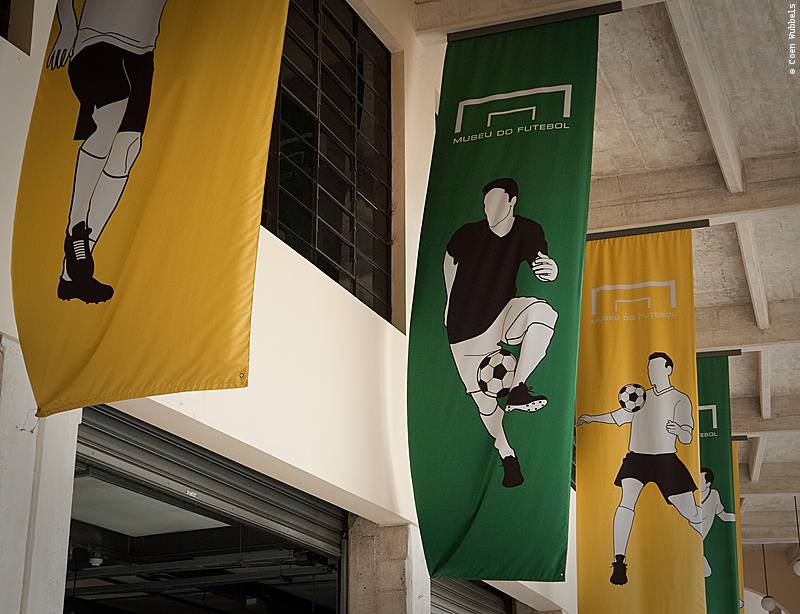 “The defeat of all defeats,” the Brazilian headlines recently cried after Brazil’s devastating loss against Germany in the World Cup 2014.

Losing 7 to 1 on your own territory in the semi-finals is a major crushing indeed. For the second time Brazil organized the World Cup and, for the second time, the dream didn’t come true: winning the largest and most prestigious soccer tournament in the world on their own turf.

I wonder how this defeat will find its place in Brazil’s soccer museum, which is situated in the Pacaembu Stadium, in São Paulo – O Estádio Municipal Paulo Machado de Carvalho, also known as Estádio do Pacaembu.

When I visited the museum, the defeat of all defeats still was Brazil’s finals against Uruguay, in 1950.

I am by no means a big soccer fan, but in this museum I could actually feel that defeat, despite the fact that it happened over fifty years ago. The museum claims visitors will “relive the emotion of a goal, the malice of a dribble, the boldness of a defense or a tackle” and I had to admit afterward: the museum lives up to that promise.

You see, you don’t visit this museum. You actually experience it. Lovers of soccer will need at least a day to learn everything about Brazil’s soccer addiction and World Cup history and for children the museum is a fabulous playground of exploration where they can endlessly push buttons, watch games and play soccer themselves.

There are table football games to play and 3D videos to watch. A mini soccer field is projected on the floor to play on and children – and their parents – can test at what speed they can kick a soccer ball.

Technology Used in the Soccer Museum

Worldwide, the number of interactive museums is growing. People want to experience a museum by selecting what they want to see or hear and interacting through games and tests. Information flashes by on screens and silence are no longer required. The soccer museum in São Paulo employs state-of-the-art technology in terms of light, sound and presentation to bring soccer alive.

Beamers are used to bring Brazil’s twenty-five Baroque Angels, as the most famous Brazilian soccer gods, idols or heroes are called, alive on huge screens. The museum likes to compare soccer with art, and so one room is dedicated to showing the most beautiful goals ever.

Underneath the grandstands, the spectacle of a full stadium is brought alive through the use of nifty sound and light effects. Outside, in the actual stadium, you can step onto the stands as well to take a picture of the soccer field.

Features of the Football Museum

Enthusiastic radio and TV commentators of soccer games add to the ecstasy of a game, in Latin America arguably more than elsewhere with commentators competing as to who can shout “Go-o-o-al,” the longest after a player has scored. I have to admit, even for non-soccer people their enthusiasm is contagious and it seems only reasonable to have a hall dedicated to the greatest soccer commentators in Brazilian history.

I relive the most famous running commentaries on the ​radio by replaying them in a soundbox. On the other side of the hall I check out some of the interviews on TV that talk about unforgettable moments in Brazilian soccer.

I leisurely stroll through fifteen rooms of the museum that feature two aspects of soccer: Brazilian soccer and the World Cup – the latter section displays, among other things, examples of all the footballs ever used during World Cup Tournaments. Brazilian soccer history is divided into sections with framed pictures on either side, with short explanatory texts next to these frames.

This is brilliantly shown in the room O rito da passagem, which is an elongated room, pitch dark where the deciding minutes of the final game Brazil – Uruguay 1950 are continuously replayed. The fact that the images are in black and white only adds to the atmosphere.

In 1950 Brazil opened the largest football stadium ever built: the Maracaña Stadium in Rio de Janeiro. With the World Cup being held on their home turf the Brazilians were convinced they would win the finals against Uruguay. After a tie of 1-1, thousands of hearts stopped beating while spectators watched how Uruguay scored the deciding goal: 2-1.

The game went down into history as Brazil’s largest defeat in its soccer history. While watching this replay, I felt the sense of disaster descending on that stadium in my bones.

Practical Information on the Soccer Museum in São Paulo