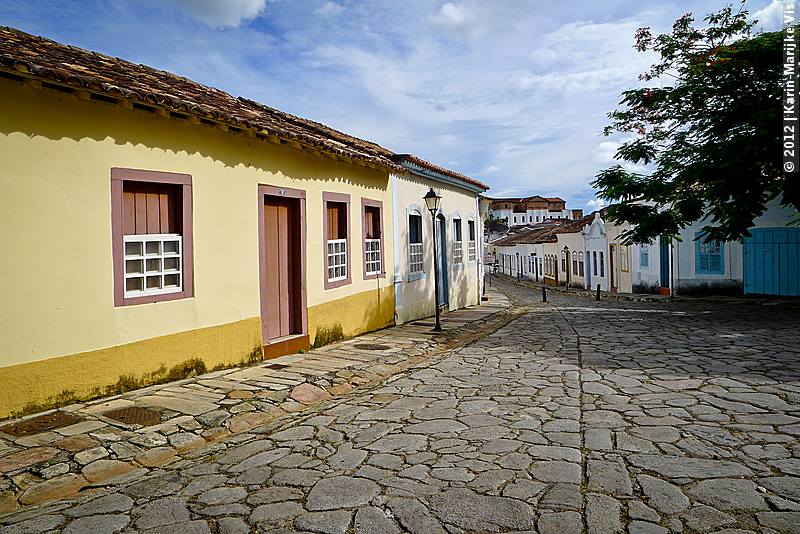 Running through a town? What kind of way of exploring a place is that, you may ask. Did I get to see anything at all?

In fact, running was exactly what made my visit to the colonial town of Goiás Velha memorable.

The Colonial Town of Goiás Velha can be summed up in one word: lovely. As I wandered through the tranquil, cobbled streets I tried to figure out what made a town attractive and concluded:

Goiás Velha meets all these requirements and let me tell you: this is highly exceptional in Brazil; it’s close to a miracle. My admiration grew. But the town has more – after all, I concluded it’s not just attractive, it is lovely.

The Colonial Town of Goiás Velha

Gold was discovered in this particular region of the state of Goiás in the 17th century. The towns of Goiás Velha and nearby Pirenópolis are a testimony to their heyday and Goiás Velha is so well preserved that it obtained a UNESCO World Heritage Status in 2001. The old part of town consists of narrow, cobbled streets where the Portuguese influence is visible: the drain runs in the middle of the street (unlike the Spanish system, where the drains run on either side the street, which was later adapted in Brazil as well).

Streets are lined with rather small, one or two-story, plastered houses painted in pastel or bright colors with contrasting windowpanes, doorjambs and shutters. During a renovation project, electric wiring was put underground and the streets were illuminated with replicas of old-fashioned lanterns.

What literally adds to the sweetness of the town are Casas do Doce – Houses of Sweets, where I bought different types of doce de leite (a kind of caramelized sweet made from condensed milk) and all kinds of candied fruits like papaya, lemon, local fruits and even sweet potatoes. All in all, enough reason to qualify a town as lovely, and for this reason Goiás Velha warrants a day or two to stroll around.

Whenever possible I go for a run in the morning. This is no fun at all on cobbled streets, I can tell you, so I soon found myself outside the downtown area, running alongside the Rio Vermelho (Red River) on a smooth pavement of slabs.

The river suddenly doubled back on itself almost 180 degrees and I ran back into a neighborhood where I saw a sign: Estrada da Nascente (Street of the Source ). Well, as the name suggested I thought this street would lead to the source of the river and got excited.

It didn’t. The pavement suddenly stopped and then there was only the river, and boulders to scramble over if I wanted to, which I didn’t. As I stood panting it started to pour and I was about to get soaking wet had it not been for the fact that I noticed a circular, roofed shelter in the middle of a playground adjacent to the river. I ran underneath it and wanted to sit down only to discover that there were various explanatory panels.

My eyes lit up. What was this? An eco-museum, the sign told me. I had read about Goiás Velha and its sights, but no source of information had mentioned this.

I smiled. Had I not been running, and had it not rained, I would never have found this place. To me that’s one of those pleasures of traveling: stumbling upon something unexpected which turns out to be fun or interesting.

In this case it was interesting. Estrada da Nascente, I discovered, has nothing to do with a source. It was the name of one of the Estradas Reais (Royal Roads) that used to traverse colonial Brazil during the gold rush. From here the Estrada da Nascente ran all the way to Rio de Janeiro, from where the gold was shipped to Portugal. More roads ran from here: Estrada norte, north to Bahia; Estrada do Sul, south to São Paulo; and Estrada Oueste, west to Cuiabá.

This particular point where I was standing now, turned out to be charged with history. Not just about the Estrada da Nascente, but here the first well was drilled to supply Goiás Velha’s citizens with fresh drinking water. From the corner of my eye I now noticed the fountain and learned it was restored only two years ago. During the restoration they discovered many artifacts in the form of coins, ceramics, utensils that tell the story of transients and inhabitants.

There was more, the third panel told me. Here they also built the first hydroelectric power station of the state of Goiás, around 1900. As a result Goiás Velha’s citizens were the first in the state who could ditch their kerosene lanterns. The plant no longer exists but a panel indicates its former location.

The discovery of this beautiful corner of the city obviously was a great motivation to run some more. Where it brought me? To various other surprises but I’ll leave those for you to discover on your own. Obviously, you don’t have to do this running – a leisurely stroll will bring you there too.