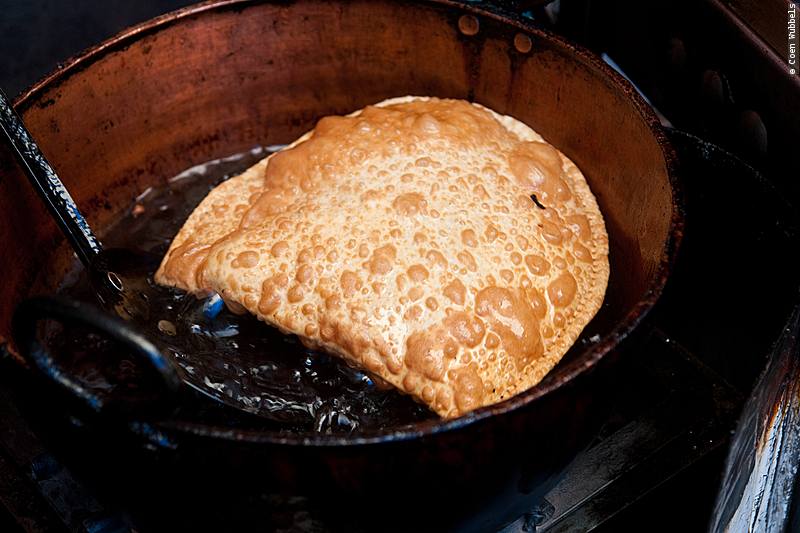 The Bolivian cuisine is not as diverse as its landscape (but then, Bolivia’s variety in landscapes is hard to match). Even though there are regional variations between the lowlands and Andes Mountains, traditional Bolivian meals are mainly a result of versatility in the use of the country’s staple food of potatoes, corn and rice.

Bolivian food and definitely worth a try when visiting the country. After all, food is not only fundamental but also a way to learn something about a country’s history and geography, as well as its daily life.

Bolivia may be one of the world’s poorest countries but Bolivians don’t starve (unless there is an extreme situation such as a severe drought). In this agricultural country there is enough food but the problem is its monotonous diet, which leads to undernourishment, especially in the case of young children. The main daily meal of most Bolivians consists of potatoes, rice and grain (corn and quinoa).

Here is an inspiring story about improving Bolivia’s diet

In many corners of the country vegetables are unheard of – especially in the countryside – perhaps with the exception of lettuce and onion. One of the government’s main focal points is to diversify the Bolivian diet by, among other things, educating the locals on the necessity of varied food.

Bolivia is the oldest country known to eat potatoes and there are more than 200 varieties. Many of these are no longer cultivated. The main potato varieties are divided into three groups: red, yellow and white. Typical Bolivian potatoes are:

Maiz, or choclo is the Spanish word used for the product on the field, but once cooked it is called mote. In Bolivia you’re more likely to find the white corn with big grains than the yellow corn more commonly known in the western world. Apart from food, corn is largely used to produce Bolivia’s main and cheap alcoholic drink: chicha.

Two popular snacks are salteñas and empanadas. Both are pastry shells filled with vegetables, eggs, potatoes, raisins and/or olives, which may be enhanced with sundry spices. Although these snacks are generally available throughout the day, halfway the morning is a popular time for them, since the Bolivians eat a light breakfast with only coffee and some biscuits.

On the market you may find api and pastel for breakfast, or as a late afternoon snack. Api is a corn drink, served hot, enhanced with spices such as cinnamon and nutmeg. There is another corn drink, which is white and bland in taste. On request they will mix the two for you. Pastel is a deep-fried snack filled with chicken, beef or cheese.

Dinner (cena) generally comes down to eating a la carte in a restaurant. Simple meals vary from 3 to 5 US dollars, although luxurious restaurants in larger cities have menus with prices way beyond that. Pizza is a popular one with Bolivians and travelers alike. Pizzerias are in every city. Vegetarian meals, however, you find only in travelers’ haunts in Bolivia’s larger cities.

At home a Bolivian dinner is very similar to the lunch, albeit in smaller portions. A popular takeaway meal in cities is fried chicken (pollo frito or broaster) or chicken cooked on a spit (pollo al spiedo) with French fries.

When unsure about where to eat, in terms of hygiene, your best bet is to go where a lot of local people are eating. Especially places filled with workers from the street generally means you’ll get good value for money.

Note that lunch is Bolivia’s principal meal and the easiest way to try the local food for little money. As it’s such an important meal, I wrote a separate piece on Bolivia’s lunches.