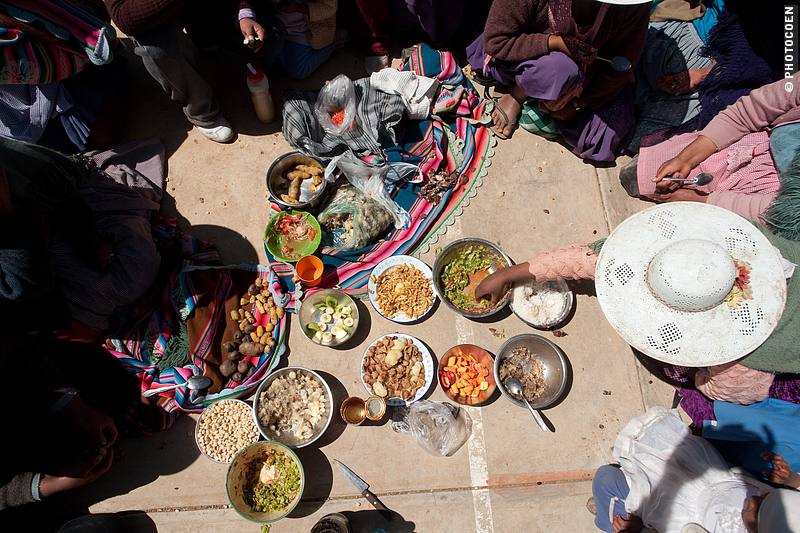 During Coen’s photography assignment for Bevrijde Wereld, a Belgium NGO that supports agricultural projects with a focus on food security, we visited various rural communities in Bolivia. One of the aspects I loved most during these meetings was lunch as it was a great way to taste Bolivia’s traditional dishes.

Sharing food was a big part of these meetings.

After each meeting, which included checking out new vegetable gardens or irrigation systems, we would return to the community center, which most rural villages in Bolivia have, for lunch. According to tradition each woman brought her share and the dishes were shared. Sometimes they laid a table and put out chairs or benches, but that was only because they had visitors.

The common practice was to have a picnic on the ground. Most dishes consisted of potatoes, corn and rice and so I thought about contributing something they were unfamiliar with. Would they appreciate it?

As Guests of Honors during an Official Lunch

In the village of Villa Junín we were welcomed in an official way. As is common in Bolivian meetings, there were extensive rituals of people welcoming each other in speeches and thanking each other for being there. We, the representatives of Bevrijde Wereld, were presented with gifts: scarves and woolen hats. A long table was beautifully decked out with dozens of traditional Bolivian dishes, most of which contained one of country’s 200 types of potatoes or a dish made of potatoes.

Only one contained meat and that one was put in front of us, the guests: it was cuy (or cuyo), a cavy or guinea pig. There was no doubt about it: this was an honor and we had to do it justice. The cuy didn’t look appetizing at all. “We’ve got to eat it,” Jaap whispered in my ear. Jaap is Bevrijde Wereld’s manager in Bolivia and the man who introduced us here. And so, despite the cuy being rather tough and tasteless, we shared it among the three of us.

There were no plates, no cutlery, no napkins and although there was running water to wash our hands, there was no soap. Nobody minded. Everybody tucked in, scooping food from the bowls with their hands and putting it into their mouths.

The Informal Version – Eating on the Ground and Contributing My Share

In Kolga Koya we were with women farmers. At lunch we sat down on the pavement in front of the community center and everybody set out the bowl with the ​food they had prepared at home. As we were here to bring fruit trees which should help them vary their diet, I thought it would fit the occasion to bring some fresh vegetables and fruits but I had no idea how they would look upon food they had never seen or tasted before.

I needn’t have worried: they loved it. The apple, the banana, the kiwi, and all kinds of other fruits I found on the market of Cochabamba, a nearby city, melted on their tongues. Apart from apples and bananas they were unfamiliar with what I had brought but my bowl with fruit salad was the first to be empty. Who knows, this tasting will help a bit to bring variety to their diet.

What I didn’t realize is that their teeth aren’t strong. In retrospect I conclude that most traditional Bolivian food is soft and easy to eat. Generally, their vegetable selection is limited to tomatoes and onions but a generally common vegetable like carrots is unfamiliar in many of these regions until they are introduced by NGOs. Apart from fruit I contributed a couple of carrots – raw. And it turned out that they couldn’t eat them properly, as their teeth were too loose to take a proper bite. But they liked the taste and nibbled on them, like rabbits.

So, on the next occasion, and there followed quite a few others, I made sure to bring cooked carrots and hoped this would bring down the barrier to start planting them in their own gardens.