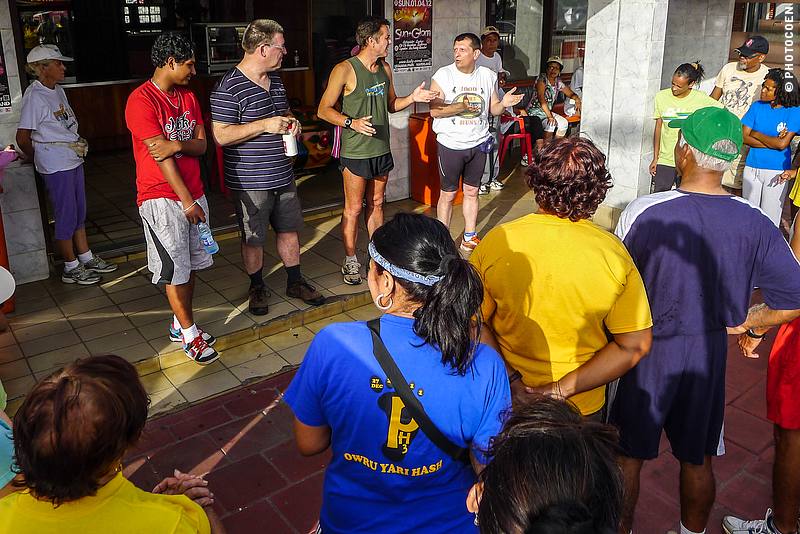 We’ve done all three and each has its charms.

What I miss about the first two is a social life. Sure, when you slow travel you have more opportunities to meet people than in ‘regular’ travel, and sometimes you do meet kindred spirits, but that is not the same thing as having a social life.

Having a social life was one of the things I enjoyed most during our one-year stay in Suriname. After an eight-year, non-stop journey we were exhausted and needed a break. We settled for Suriname as that was a place where we could arrange long-term visas and a car permit.

We rented a place because we needed a rest. We ended up having a fun and busy social life. A side effect was that we came to know Suriname from completely different angles than via the common traveler inroads such as sightseeing and (organized) outdoor activities.

Each Monday we met about 40 or 50 hashers, all dressed in shorts, shirts and sneakers. With a punctuality atypical for Suriname we start walking at 5:30 pm. The FRBs (Front Running Bastards) led are the fastest, fittest runners of the group. We followed shreddy (shredded paper) that had been placed along the road by the hares, as HHH plotters are called.

The HHH started in the 1930s in Malaysia when a diplomat ran every Monday to rid his body of the alcohol consumed over the weekend. Friends joined, and socializing afterward became more important. Today, some hashers like to explain their club as ‘Runners with a Drinking problem’.

The Hash in Paramaribo is open to runners and walkers, making it a nice mixed bunch of people of all ages. The latter will walk about five kilometers while the runners will cover about seven kilometers because of the checks, doubling back and extra loops.

Sidewalks are far from commonplace in this country and pedestrians are lowest on Suriname’s hierarchical traffic ladder so running on main roads was not without danger.

Fortunately, most runs led through the countryside or through residential areas that varied from slums (land squatted by forest Maroons in the hope of finding a future in the city) to affluent neighborhoods (the larger the house, the bigger the garden, the higher the fence and the heavier-barking the dogs).

In some areas local kids picked up the game and had ​a blast when they succeeded in misleading us by hiding or misplacing shreddy. Trail cross farmlands and gardens. Hashers plow through muddy fields, keeping their balance on foot-wide paths right along canals and ditches, cross rickety bridges and wade through streams. The Hash is not for those who insist on staying clean.

This story will give you an impression of a Hash event.

The Hash: our Inroad

The Hash brought us to areas in and around Paramaribo that we most likely wouldn’t have discovered on our own. It gave us insight into how people live and we were often confronted with one particular paradox: Surinamese are among the friendliest, easiest-to-meet people we’ve met on our journey.

Yet many of those same friendly people need to live behind fenced-in gardens, guarded by dogs because robberies and break-ins are unsettlingly common here.

Each week we explored a different part of the city. The runs ended at a bar or supermarket – basically any place where beer is available. Surinamese like to socialize, to share a drink and have a laugh together, and they don’t need a fancy place for this; a wooden bench always found outside supermarkets serves them just fine. Socializing is easy for us in this country: Dutch is our mother tongue and Suriname’s national language.

If there was music we would dance on 1980s pop, reggae or the nowadays popular Zouk until late in the evening. These so-called after-hashes became the center point of runs called Full Moon Hashes, which stop at several bars downtown on a Friday night.

Then there were the Special Hashes, day-long trips into the countryside. Beforehand we knew only one thing: we were bound to get wet and muddy. To top it off we joined two international hashes in western Suriname and in Guiana with hashers joining us from Guiana and Tobago.

The Hash isn’t limited to Suriname. It is a worldwide organization with about 2000 Hash groups divided over 1200 cities. Since we’ve back on the road we joined Hash House Harriers in La Paz, Bolivia, and Lima.

To learn more, check out the Hash House Harrier’s website.

SARK, Surinamese Auto Rally Klub, organizes about ten rallies a year with the focus on navigation (contrary to speed). The majority are city rallies in and around Paramaribo. They were our introduction to navigation rallies. We learned about tterminologiessuch as a ball-arrow chart, and a herring-bone chart, and figured out how to read aerial photos and photo orientation assignments.

Meanwhile we concluded that SARK also showed us parts of Paramaribo and Suriname which as a regular traveler/tourist we most likely would have missed.

You don’t necessarily need to go to Suriname for its (Amazon) rainforest. You can find this in other countries like Brazil, Peru, Bolivia, and the Guianas. You don’t have to go Suriname to watch sea turtles; there are enough other beaches in South America and the Caribbean to see those. Two elements make Suriname a unique destination: its (colonial) plantation history and the savanna.

The savanna is the transition zone between the rainforest and the coast. There is not one savanna, there are many. The Savanna Rally traverses prairies with coarse grass stretching towards the horizon or crisscrossing​ a mishmash of forests and savanna with ‘islands’ of shrubs and Mauritian palm trees. A large part of this rally’s fun lies in the exploration of a phenomenal part of Suriname.

Rally driving also taught us about the Surinamese way of life. An important aspect of the rallies is kisis. The Surinamese love to tease each other and their conversations are often peppered with jokes on others, themselves or life in general. However, a kisi is not only a joke but can also be a trap.

The organization hides kisis throughout the rally, misdirecting routes and resulting in penalty points. They also account for some of the main discussions – and laughs – during the get-together afterward at the clubhouse where we shared a beer and a meal.

The average rally driver belongs to Suriname’s affluent. They give something back to the community through charity rallies, when they collect money to contribute to local projects. One of their projects just before we arrived in Suriname were new sleeping quarters and bathroom for boys at the children’s home of Sukh Dhaam, situated in the countryside east of Paramaribo.

Sukh Dhaam also has a house divided into apartments, used by visitors, interns or a few lucky ones who may rent one. We were one of those lucky ones. Thank you, Mr. and Mrs. Salamat for having us.