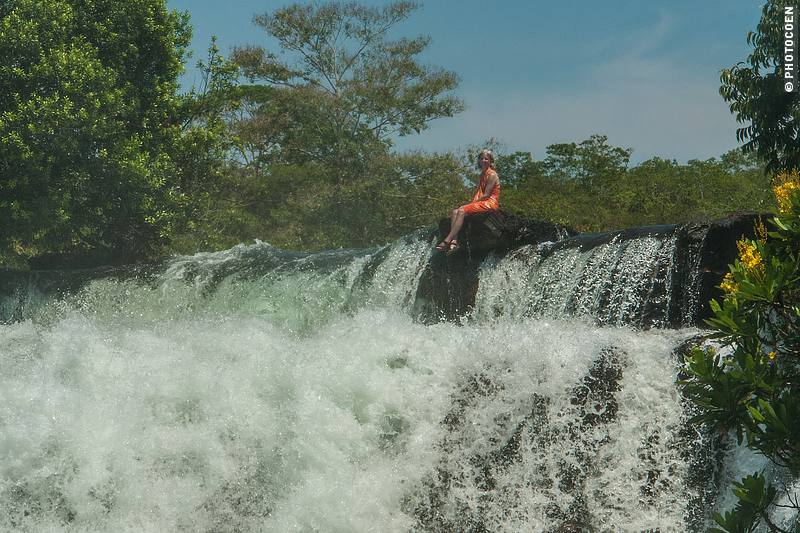 What is the link between slow travel and waterfalls, you may ask?

Does seeing the Niagara Waterfalls or Iguazu Waterfalls slow you down in any way? On the contrary, you may argue. These type of destinations we often visit for the destination itself rather than looking for anything interesting along the way.

These well-known waterfalls are in all guidebooks and we want to see them for a reason: for their sheer size, their immensity, the feeling of awe they evoke. The idea of all this water thundering down 24 hours a day, 365 days a year, for centuries on end, simply is mindblowing.

And so, yes, we did visit Iguazu Falls (read about it here for Brazil and here for Argentina). You can visit these falls, like the Niagara Falls in Canada and the U.S., from two countries: Brazil and Argentina. On both sides we waited for five days for the weather to clear. In both cases it was worth the wait.

Thankfully we had no plane to catch and spending ten days in hostels for the weather to improve generally is no problem in our way of life.

Yet some of the smaller, sometimes even insignificant, waterfalls in South America bring about much stronger memories.

They are related to people.

Visiting some of these waterfalls were a result of having met local people and having made friends. People who wanted to show us their beautiful surroundings. As we have zillions of photos of waterfalls, I will focus on Brazil for this blog post because in this particular country the link between meeting people and seeing waterfalls has been the strongest.

We met up with our friend Leo, whom we had met many years earlier in Laos and who now lived in Porto Alegre. With this meeting our guidebook disappeared underneath a lot of other stuff and we continued our journey in Brazil solely through tips and invitations from local people.

One of those first tips was Ferradura National Park. On the photo in this blog post you see why the name Ferradura – horseshoe – is so apt.

In Florianópolis a Dutch guy had stopped us on the road when seeing the Dutch license plate on our car. We chatted for a bit and Paul invited us to stay at his Pousada Tulipane for a couple of days.

As we said goodbyes he gave us the tip to check out Reserva do Sebuí, which we later concluded is one of Brazil’s best eco lodges (read about it here).

We drove north and through the Internet we met Milena. We stayed with her in São Paulo and joined her family for the weekend to their sítio in the countryside with a vast terrain of forest, hiking trails and waterfalls. The latter proved an ice-cold bath, a welcome refreshment in the hot climate.

We would have never found this waterfall without having met these wonderful people.

Other Paulistas (inhabitants of São Paulo) told us to check out Bocaina National Park, which lies between São Paulo and Rio de Janeiro. Along the way stopped at Vale das Cachoeiras when searching for a place to sleep.

“No problem, you can camp here if you like, and why don’t you join us for lunch?” the owners suggested. We stayed for two nights and explored their terrain – including a waterfall.

Our initial plan to just drive into Brazil to visit Leo and then return to Argentina had grown into a five-month exploration of south, southeast, and southwest Brazil. Our visa were running out but the country had captured our hearts and we knew we would be back.

About a year later we returned, this time entering the country from Paraguay. I looked at the map of West Brazil and felt drawn there although I couldn’t say why. The guidebook had nothing to say about the region, and again our guidebook for Brazil turned out pretty useless.

We decided to check out the province of Mato Grosso. We ended up traveling in just this province for five months and the photos below are a minimal selection of the dozens of waterfalls people took us to – after all, how many waterfalls can a person see, in life or on photos, before becoming tired of them?

Mato Grosso has no significant tourist infrastructure so it was a struggle to find our way around as our Portuguese was still very limited and hardly anybody spoke English. But we shared a language of wanting to see and experience beautiful places with the local people. Many took us to waterfalls.

Brazilians not only love to show their country to visitors, they specifically love water: the sea, rivers with white-sand beaches, and waterfalls. Anything to go for a dip and to share family time with a BBQ and a beer.

By the way, West Brazil impressed us for many more reasons than just its sheer number of waterfalls. You can read it here.

We left the country as our visa ran out and another eight months passed before we returned. Our hunger for seeing more of the country had returned as well and this time we crossed central Brazil. This time it was a tip from other overlanders to stop at a place we otherwise might have skipped: we checked out Alta Paraíso and stayed at Spazenda where we visited a waterfall in the surroundings.

The second was a result of a meeting in Brasília, where a man had invited to stay with him at his sítio near Alta Paraíso, which is how we discovered Waterfall dos Couros.

Again we left Brazil, stayed in the Guianas for about 1.5 years, and re-entered Brazil via Roraima, in the north. Our friends in Boa Vista emphasized not to miss the waterfalls around Presidente Figueiredo.

“We’ve seen our share of waterfalls,” we responded, convinced they wouldn’t be able to entice us anymore after all we had seen.

However, as we drove through the area we decided to check them out anyway. Wouldn’t want to miss a possibly great place, right? Which showed, once more, how valuable local contacts can be.

We hiked numerous hiking trails through forests where Coen had the time of his life photographing minuscule frogs and we took dips in various waterfalls.

What Makes a Good Memory?

Each time we find ourselves in stunning natural surroundings we take photos, in awe as we are of that mountain, volcano, view, or waterfall. Interestingly enough, when looking back at those photos years later we often can’t recall where we took them. Was that the Himalayas or the Andes? Was that in north India or in Chile? Nature turns out to be similar in many ways throughout the world.

It becomes different when that particular place is connected with people. Suddenly that view, or in the above-mentioned cases, waterfalls, are related to a story. To a meeting, to a get-together, to spending time with somebody, to having fun.

Slow travel is one of the tools to maximize the opportunities to meet people. Of course, traveling slowly is not enough. You need an open mind as well. But rushing through places hardly ever helps, that’s for sure. And meeting people can bring you to extraordinary places.

That’s what I wanted to show through a photo series of just waterfalls in just one country. I hope you enjoyed them.