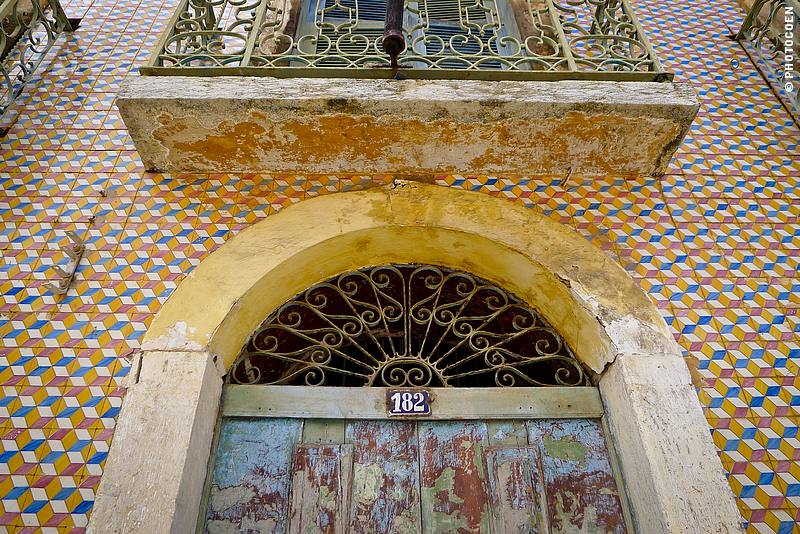 In the doorway stands an elderly man. Our eyes meet and I shake his hand.

“You are lucky to live in such a beautiful building. What an incredibly tiled façade your home has,” I comment.

Few cities in Brazil surprise me as São Luís does – Brazil’s capital of azulejos.

For the past couple of hours I have been strolling through the center of São Luis and I still don’t believe what I am seeing: this is by far the best-preserved center of any of Brazil’s major cities.

The man beams. “Oh yes, we have a wonderful city. But here, in this street we have the most beautiful tiled house of all São Luís,” he exclaims while pointing across the street to a façade with tiles depicting an abstract flower motif in white, yellow and blue.

I ask him if many azulejos are stolen as during my walk through the city I noticed many damaged façades.

“Not so much anymore. People used to rob and sell the tiles, but these last few years locals have come to understand the value of the tiled façades,” he explains. “When people see somebody stealing or destroying tiles they call the police, who show up rapidly. And nobody has ever robbed a tile from that house. We watch it from our window constantly.”

I leave with a smile and a hope that São Luís’ legacy of azulejos will remain intact. Despite the overwhelming number of extraordinarily tiled façades (“most tiled buildings outside Lisbon,” a local stated with conviction), it is a crumbling city, which could use some serious restoration.

UNESCO justifies their decision in the inscription on the Historic Center of São Luís do Maranhão, “an outstanding example of a Portuguese colonial town that adapted successfully to the climatic conditions in equatorial South America and which has preserved its urban fabric, harmoniously integrated with its natural setting, to an exceptional degree.”

São Luís was founded 1612 by the French, was ruled by the Dutch for a couple of years and then taken over by the Portuguese who ruled it until Brazil’s independence in 1822. During the years of colonization, São Luís grew into a thriving city as a result of prosperous rice, sugar and cotton plantations.

Buildings downtown go back as far as the 17th century and are characterized by tiled roofs, elongated windows and doors, and balconies with wrought-iron railings. Many still have their original azulejos, although these weren’t added until later, starting in the 18th century after people discovered that tiles protected the façades from crumbling too quickly in the tropical climate.

Tiles were produced in Portugal, where they had a semi-industrial or industrial technique to produce standard-pattern tiles in cities such as Coimbra, Lisbon and Porto. Tiles were, and are, made in other countries as well, among which the Netherlands, France and Germany and exported to São Luís.

The city’s largest concentration of tiled facades is on the cobbled street of Rua Portugal, where I stumble upon an art museum whose ground floor is dedicated to azulejos. An employee accompanies me and answers my questions, which is how I learn tiles from France are recognizable by their size (13-13 cms), which is different from German and Portuguese tiles (13,5-13,5 cms).

The question remains: Why is São Luís so much better preserved than Brazil’s other major cities?

The employee explains it to me, “Most cities modernized in the 1950s-1970s, which in those days often meant bulldozing the old and replacing it with new. This didn’t happen in São Luís as it suffered a long economic crisis and there was simply no money to modernize anything at all.

By the time prosperity returned to São Luís (today it has one of the world’s deepest ports and is Brazil’s main port to export vast amounts of minerals mined in the state of Pará), Brazil had started to understand the value of old, beautiful buildings so instead of bulldozing it, it has preserved the city center as it is today.”

São Luís is also known as Brazil’s capital of reggae, has an important festival in June called the Bumba Meu Boi, and has a large concentration of art galleries and craft stores.