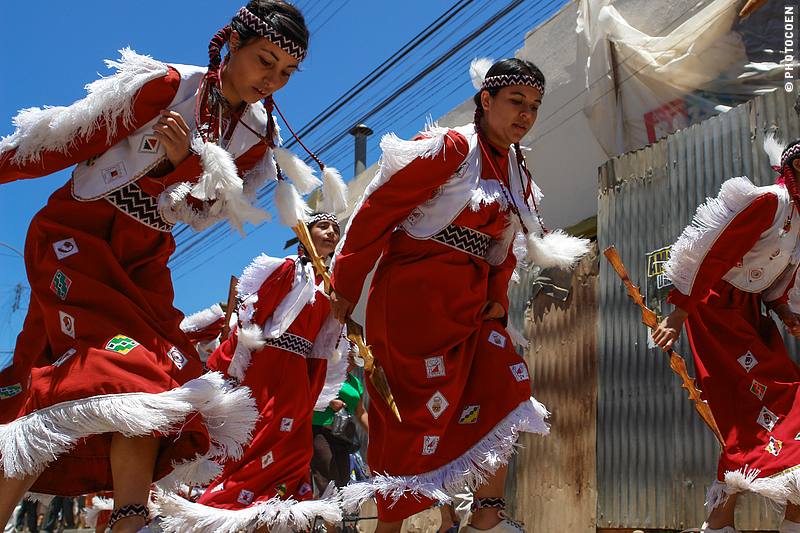 According to its inhabitants, Andacollo is the most religious town in Chile.

Time to check it out!

Andacollo features a basilica plus a second church, both of which are National Monuments. La Virgen de Andacollo is highly regarded and each first Sunday of the month she is paraded around the plaza in a procession.

On the first Sunday of October, she is honored with a religious festival called La Fiesta Chico, but the spectacle of the year is in December: La Fiesta Grande, which lasts from the 23rd to the 27th.

While driving from the coastal town of La Serena to Andacollo I watched the first pilgrims hiking up the asphalted road – La Ruta del Peregrino (the Pilgrim’s Route) it is called. At times people were shortcutting the winding curves by taking signposted trails off the road. Buses plied up and down, filled with pilgrims as well. It was obvious that this was a big happening.

Burning Candles – or not?

Around the plaza vendors sold candles. “Don’t burn candles,” signs inside the church instructed. Nonetheless, the floor was slippery with a thick layer of candle wax. Pilgrims weren’t burning one candle but three or four at the time.

“We do this so our wishes or promises will be fulfilled”, a pilgrim explained. “It is important to wait until the candles have entirely burned down.”

It didn’t seem to bother them that hot wax was dripping on their hands in the process. I supposed it was part of the sacrifice they made. Pilgrims were approaching the altar on hands and knees, where the Virgin Nuestra Señora del Rosario de Andacollo awaited them.

When we parked the Land Cruiser on the outskirts of town, the pandemonium of the drums had immediately filled my ears. Now, on the plaza, we witnessed how pilgrims honored their patron saint with colorful and noisy fervor. While the priest mumbled prayers, dance groups rhythmically moved up to the church, entered one group at the time, and went swinging down the aisle with a lot of commotion. The priest’s voice was drowned out by their music.

The origins of La Virgen de Andacollo, also named La Virgin del Rosario or Nuestra Señora, are clouded in legends. Is the name Andacollo related to the Quechua word Anta-Goya, meaning Cobre-Reina (Copper Queen)? Was the statue indeed found by a miner called Collo? Or did the statue originate from La Serena, where it was hidden in the mountains by a priest who fled the city during its destruction?

Whatever the legends surrounding her origin, they are greatly surpassed by the tales of the miracles the Virgin performed. Like checking a smallpox epidemic in 1871, and healing the stomach, cut open, of a slave who had ended up in a fight when gambling and had sought refuge at the Lady’s feet. La Virgen de Andacollo is the Patron Saint of miners, healing the sick ones and finding the ones lost in the mines.

This religious gathering draws crowds of up to 150,000 worshipers and among them are two hundred dance groups from the entire country. Eight of them are from Andacollo itself. This is one of those festivals that characterize South America, where the religious aspect is often combined with the magic of traditional music and dance.

The groups could be divided into two subgroups: the indigenous dance groups, often displaying ancient indigenous customs and dances, and the modern ones.

The modern groups wore costumes that were ornate and imaginative, but nevertheless less imposing than the traditional indigenous costumes, which featured the most elaborate plumed headdresses, heavily fringed robes and bedazzling capes. The plaza was filled with a frenzied crowd, half of them costumed dancers jumping and swirling, or playing a flute or drum, the other half – we among them – the rapt onlookers.

Along the plaza I stumbled upon a ‘donation room’, where large boxes invited visitors to donate their gifts. Organizers wrote a receipt for each donation and if the gift was large enough, the receipt came with a calendar or a postcard. Next door I visited a museum displaying hundreds of gifts to the Virgin: porcelain dolls, scale-model wooden boats, rosaries, as well as a surprising number of Chinese vases.

Pilgrims slept all around the church, on the ground, or camped in the dry riverbed that bisects the town. Local people offered baños 200 pesos, duchas 400 pesos (toilet 200 pesos, shower 400 pesos); others let their garden as parking space.

Behind the plaza we stumbled upon a Zona Religiosa – todo commercio prohibido (‘Religious zone – all commercial activities prohibited’). The streets displaying these banners were filled with, right, commerce. Endless rows of stalls sold virgins, rosaries and other religious paraphernalia. Others displayed hats, ropes and other products related to horseback riding, and, unsurprisingly, paintings of the virgin were omnipresent.

While the pilgrims had three more days of celebrations, I finished my visit by watching the procession late afternoon. The elaborately dressed Virgin was carried around town with crowds crying and waving at her with tissues. It was a spectacle more than worth a visit.

Practical Information on the Andacollo Festival