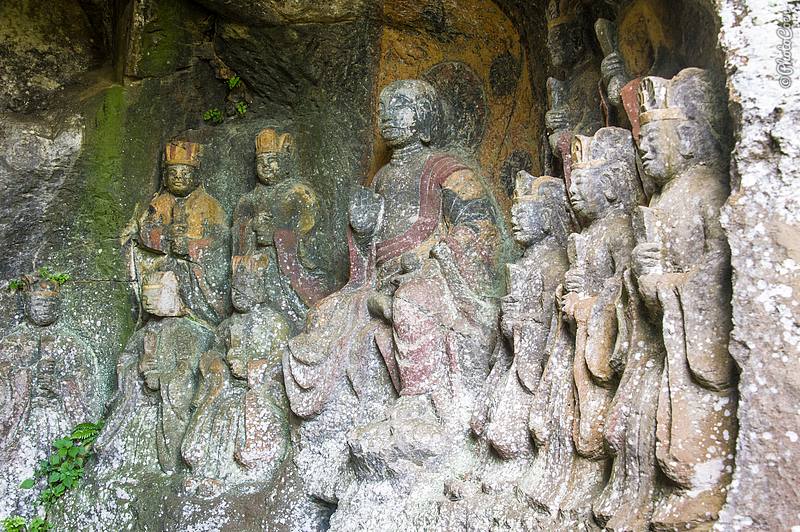 We drove to Usuki to see its famous stone Buddha statues.

We got to see so much more!

On arrival we first got a lesson in history: it was here where the first Dutch ship reached Japan, in 1600. A map at the tourist information promised more good things, and so we found a place to camp and explored the town.

The First Dutch in Japan

In 1598 the Dutch sailed from Rotterdam with five ships with the goal to reach the Maluki Islands to buy spices, and stop in Japan along the way. Only one ship survived the journey with a crew of 24; the other 62 had perished. At the tourist information is a telling image of this arrival – look how beat the men look and need to be carried ashore.

Two crew members became influential men in the Japanese society: the Englishman William Adams, who received the rank of samurai and the Japanese name Miura Anjin. The trader Jan Joost van Lodensteyn (Dutch) played a role in future trades with Japan – the arrival of De Liefde (name of the ship) was the start of a centuries-long trade with Japan.

The Samurai Town of Usuki

The town of Usuki became a samurai town, and parts of the town still feature beautiful buildings, among which the Usuki Castle (1556, by Ōtomo Sōrin), and temples. We strolled the Niōza-Historical Road downtown, taking in the rustic architecture of white plastered walls or natural stone walls, unpainted, wooden samurai residences, the former Shinkō-ji temple, and other temples and shrines. Forty hectares of Usuki are dedicated to historical preservation.

Throughout our walk through this old town there was no blaring music, no bright-colored signboards – what a pleasure. Particularly the Ryugen-ji temple appealed to us, which was established in 1600 and comes with an elaborate three-story pagoda.

Adjacent is an old cemetery, a higgledy-piggledy collection of weathered stones covered in moss and lichen. In between we stumble upon little buddha statues, and can’t miss the occasional modern tomb of smooth, shiny natural stone which fell out of place.

With Coen’s eye for detail and his love for photography, we took much longer than my anticipated half an hour walk. The sky had cleared and was blue, the temperatures warm, the surroundings full of surprises so who’s complaining…

While the Buddha statues had been the reason to come here, visiting them almost became like an afterthought.