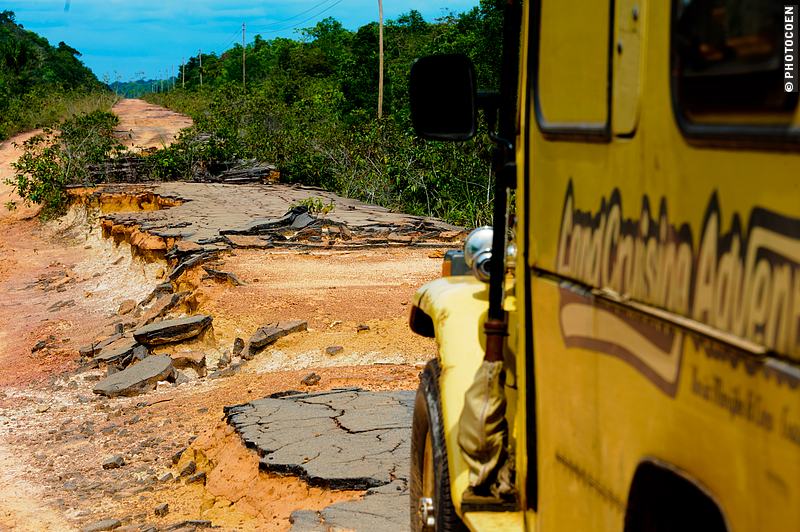 The Land Cruiser crawls through potholes, jolts over bumps, and carefully drives onto wooden constructions called bridges. Hour after hour, day after day, we drive at a turtle’s pace on the infamous, 800-km-long BR319.

Welcome to the main highway between Manaus and Porto Velho, in the heart of the Brazilian Amazon.

The BR319 was constructed in the 1970s as one of the first roads to open up the Amazon to the rest of the Brazilian economy. However, the region often gets flooded during the rainy season and the construction was so poorly done that the road quickly fell into disrepair. Nowadays, all trucks and most vehicles ferry their way up and down between Manaus and Porto Velho.

We wanted to conquer this challenge. We listened to tips from other travelers, chose the dry season to drive the BR319 and extensively stocked up on fuel, food, and water. The first 100 kilometers were easy enough as there were still communities and the asphalt and bridges were in reasonable shape.

After we had taken our second ferry, the scenery changed. From here on there was nothing but vast tropical forest, a meandering ribbon of what once was asphalt and the two of us (plus six oncoming vehicles during the course of three days).

The rocking motion of the Land Cruiser brought me in a meditative state. My body moved forward, backward, sideways, my eyes followed green tree after green tree for hours on end with an occasional lizard crossing the shimmering road, or a toucan flying across. On the barely two-meter-wide path, some stretches of a yellow line were visible. It was hard to believe at one time this line separated a two-lane highway.

Traveling slowly it was indeed, with days of barely covering 100 kilometers a day. But was it slow travel?

As we hit the final stretch of the BR319, I realized it was not.

Anxiety on the BR319

How much longer was driving the full 800-kilometer-long BR319 going to take? The Land Cruiser was performing excellently, the bridges were not that bad at all, however, only one of those two (car or bridge) needed to break down to be in serious trouble.

And so we pushed on.

Too Busy with Ourselves

As a result of that anxiety, of not knowing what lay in store for us, we didn’t take two hitchhikers on board, one of them a backpacker who had been waiting for a vehicle for two days – he most certainly faced the depth of his own challenge of getting across by road instead of boat. We were worried about ourselves, and didn’t want to worry about a third person (in all fairness: where would he have slept that night as we rough camped in the pouring rain?).

We did stop for a moment to ask a family that was camping in their pickup along the side of the road if they were okay but we couldn’t quite wrap our heads around the driver’s waterfall of words, other than that a companion was on his way to the city to get him some sort of spare part.

Only later did I realize I should have offered food and water, and felt ashamed. Why didn’t we stop, get out and share a meal or drink, or at least offered to do so? Neither did we visit the sole village we crossed during those three days where the people seemed friendly enough, but only passed through.

The next ferry was waiting, as were another 600 .

We were too preoccupied. With ourselves. With our Land Cruiser. I will admit, in retrospect, it’s easy to judge. The ordeal of driving the BR319 was in no way as dreadful as we had anticipated. Nevertheless, we missed out on connecting with life in and around this uninhabited part of the Amazon.

And so, yes, we traveled the BR319 slowly but it was no slow travel. We can tick BR319 off our list of legendary roads but haven’t really gotten to know it.