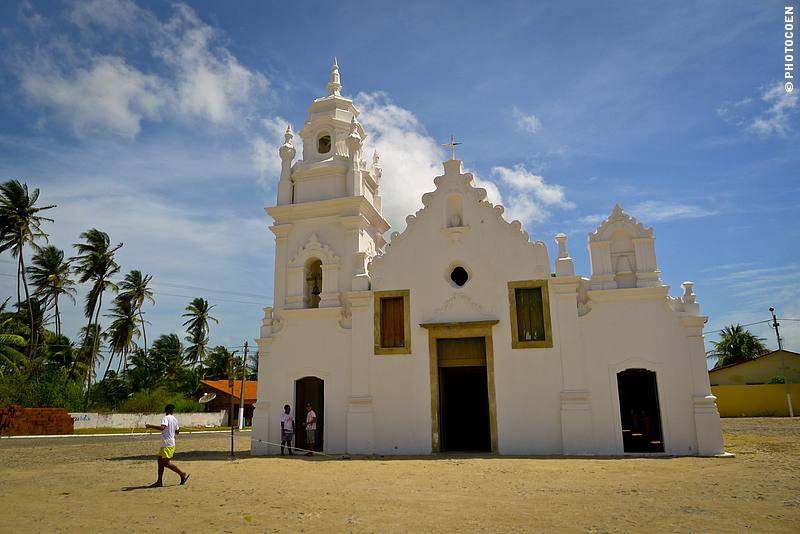 What were we going to do with 100 limes? An hour ago we thought we were going to be stuck with a bottle of cachaça and a kilo of sugar which had become useless as the main ingredient for our favorite cocktail had been missing: limes.

It shouldn’t have come as a surprise that in the countryside I couldn’t buy these fruits, after all many people have lime trees in their garden. People pick limes for free, why buy them? Feeling disappointed we drove on but stopped at the end of the town to admire a plaza with cobbled stones shaded by trees and a picturesque whitewashed church with dark-brown shutters.

The church has a story: It was built in the 16th century by the Portuguese who were as yet unfamiliar with the geography of the region. It took a couple of decades for the church to disappear under the “wandering” dunes that are common all along Brazil’s northeast coast.

The church was forgotten until two centuries later, when the dune had “wandered” on to the point that part of the church became visible once more. Fortunately, somebody saw the beauty of it and money was invested to properly restore it; it definitely is one of the loveliest churches we have come across in this part of Brazil.

Alongside the plaza stood a fisherman, repairing his net. Coen walked up to him to take a picture, chatted a bit and tried once more if maybe this man knew where we would be able to buy limes.

“Just a sec,” the man said and entered his house.

Within minutes he returned with five limes and handed them to Coen.

“If you like more, come back at four. I’ll find more,” he suggested, which sounded like a plan.

We drove to the coast and visited TAMAR, a sea turtle protection program. As we were studying the explanatory panels the caretaker walked up to us.

“There are two youngsters on a motorcycle for you at the entrance.”

Coen recognized them: they were among the inhabitants he had asked for a place to buy limes. The men had wanted to help and had driven somewhere to pick some 100 limes, which they now proudly presented in a plastic bag.

Such moments make us smile, or bring a tear to our eyes: these moments in which people show kindness to us. Over the years we’ve had many of them, yet we have never taken them for granted: each kind gesture we have received from a stranger will remain with us. Coen wanted to give them some change for the effort but since he had only a 20 reais (10 dollars) bill, they ended up getting a good deal for their effort.

Now that we had so many limes we quickly returned to the fisherman to tell him we wouldn’t be back at 4 pm for more. Too late, he had already collected a bag too!

Fortunately, he understood we really couldn’t accept more, they would only go to waste and he assured Coen he would be making his own caipirinha cocktail for his friends and family that night – after all, it was Christmas.

“No problem!” he said and with a wave we drove off.

Those limes didn’t go to waste. We had our share of caipirinhas, but not alone.

A day later we were invited by the Frenchman Sylvain who has lived in Brazil for 12 years. We camped on the terrain of his recently opened Pousada Lacula and happily made our daily contribution by fixing those cocktails until we finished all limes after New Year’s Eve, which was a good sign to move on.

Additional Reading about Food in Brazil