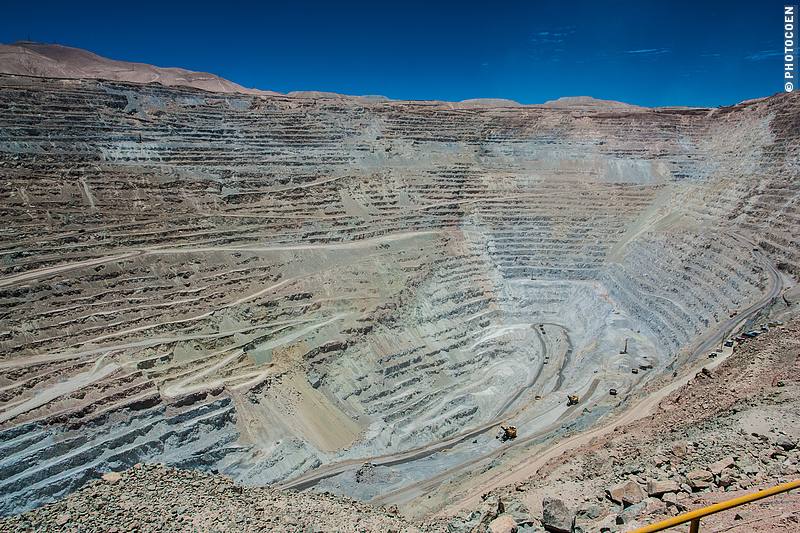 The tour bus stopped and I could gaze down the humongous hole in the ground: 1 kilometer deep, 3 kilometers wide, and 5 kilometers long. Even while standing right next to it, it was hard to grasp.

Can you even begin to imagine the size of this mine?

Along the sides of the mine trucks slowly zigzagged up and down over unpaved roads that were constantly kept wet by other trucks to keep down the dust. Of the ninety-nine trucks, seven are permanently used to this end. The region has not seen rain for two years. I felt like I was staring at some futuristic stronghold that James Bond had to raze to the ground.

This mine is far from futuristic, though. In fact, it’s more than one hundred years old. In 1911, copper deposits were discovered north of Calama and quickly exploited by the US Anaconda Copper Mining Company.

It grew into the largest open-pit copper mine in the world, producing more than 600,000 tons of copper annually. It was in this mine where Che Guevara’s political consciousness began to stir, as described in his Motorcycle Diaries.

The Copper Mine in Chuquicamata

The mine won’t go any deeper than it is, though. Digging deeper apparently is no longer profitable. Instead they have started digging tunnels sideways to find their way to more copper deposits

Moving the Town of Chuquicamata

Until a couple of years ago, the twenty thousand workers lived in the adjacent town of Chuquicamata. However, international environmental laws led to the evacuation of the entire village to Calama, sixteen kilometers farther south, turning the town of Chuquicamata into a ghost town. It is now disappearing under one of Chuquicamata’s many slag heaps.

The only way to visit the mine is by booking a tour. I joined the rest of the visitors and boarded a bus where our host would explain everything we were going to see for the next two hours.

If truth be told, this entire mining industry is too large, too vast to really comprehend. Numbers related to the size of the mine, the quantities of copper extracted or the size of the mammoth slag heaps we passed were staggering and overwhelming. How do you visualize 600,000 tons of deposits that are daily transported, one third of which has copper-containing minerals? I simply can’t, and it boggled my mind during the entire tour.

From Chuquicamata the copper is transported by train to Mejillones, from where some forty percent is exported to Asia, of which twenty-two percent to China alone. The older slag heaps, dating from the 1950s, are on the agenda to be recycled. In those days the techniques to extract all the minerals were inadequate and the green color of the copper is still visible in the slag heaps.

If the pit wasn’t dazzling enough, the trucks definitely were: German Liebhers and Japanese Komatsus are eight meters wide and, when in operation, consume two to three liters of diesel per minute. The diesel tank holds four thousand liters. The trucks run twenty-four hours per day, transporting loads of 330 – 400 tons at the time and need maintenance once every two weeks. A tire costs thirty thousand dollars and lasts one year.

Since the driver sits on the left, the lane used by the trucks inside the mine has been switched to the left side for security reasons: this way the driver either drives along the upper wall or sits directly on the canyon side. Another security measure is that a pole, carrying a small flag in the top and light (for the night), is attached to all other vehicles, to prevent the vehicle from being run over by the massive trucks, as happened in the past.

The mine has gone through some major changes: instead of digging deeper, which is no longer profitable, horizontal tunnels are now being dug to further tap the copper deposits. The trucks will go out of business as they have become too expensive, and future deposits will be transported by electrically controlled conveyor belts.

A Necessity or is There Another Way?

I was impressed by what I saw and I was dazzled by the technology, the size of everything, and the numbers. It didn’t make me a happy person. It may be the largest open-pit copper mine, but fact is, this is not the only one mine in the world.

I understand the current need for copper yet I can’t fail to notice how we are not only depleting resources but are destroying the planet in the process. No matter how beautiful the tales of mining industries about how environmentally friendly they work, irreparable harm is being done to our planet, our only home.

For that reason I encourage others to go and check out mines, to see for yourself what level of destruction is going on. Seeing it with your own eyes does have a different impact than watching a documentary on the subject on television. Is there really no other way than mining to provide us with what we need?

Practical Information on the Chuquicamata Coppermine