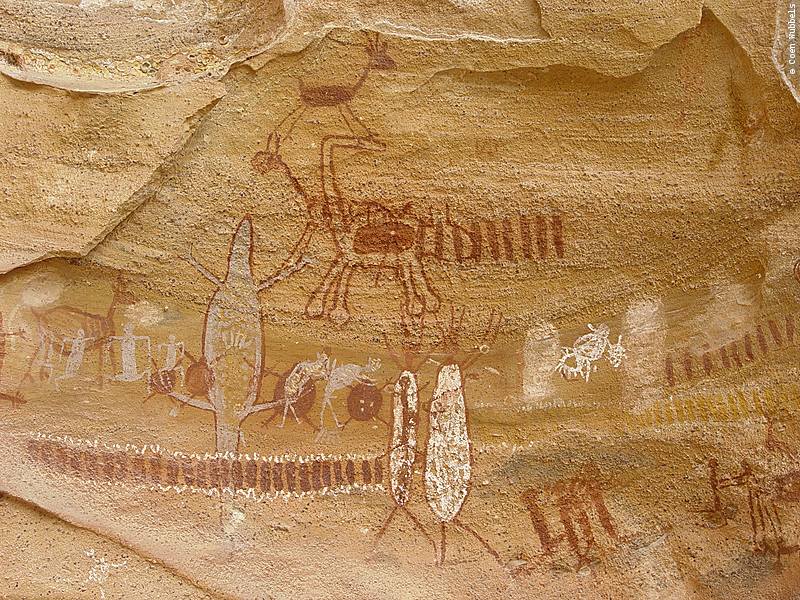 Smack in the middle of Brazil’s sun-scorched, dun-colored, vast and desolate northeastern Sertão region lies a national park. Why? What’s there to see?

Rock carvings. Thousands of them!

Reading a local guidebook, I had became fascinated and jotted down Serra Capivara National Park on my bucket list.

The first Amerindian population in Brazil

A couple of months later we are in northeast Brazil and drive to the park. We find a guide and leave around dawn to enjoy the cool morning as long as possible. At ten the sun is already beating down fiercely and we seek the shade of Serra Talhada’s rock walls, which we climbed to take in a bird’s-eye view of the park.

“At one time this was all sea,” our guide Cida says, stretching out her arms towards a vastness of thorny scrubland vegetation called caatinga, and boquerões: dead-end valleys.

After the sea retreated, the red and yellow table mountains started to erode, creating valleys where homo sapiens found shelter, Cida explains. In 1983, pieces of charcoal were found; their dating was proof of habitation 50,000 years ago.

A year later, thermoluminescent samples of rocks validated habitation as long as 100,000 years ago. The museum “Do Homem Americano” in São Raimundo Nonato, the gateway to this park, states these figures as proven facts.

Such revolutionary claims didn’t, and with some still don’t, go down well with those who believe that the first nomads came to the Americas via the Bering Street about 12,000 years ago. Of course, for me there is no way of knowing if these are all well-founded claims, but I can imagine that feelings on the subject run high among scientists.

Boquerão da Pedra Fudrada is 1 of the 15 historic sites we visit today, which is a full-day program. You could spend a week here and not have seen it all. Whereas some rock shelters are easily accessible (the site we are visiting is one of the 30 sites accessible by wheelchair), others demand climbing vertical ladders or bushwhacking and scrambling over rock formations.

The majority of paintings are 6,000-12,000 years old; some have been dated older than 25,000 years. It is unknown why the rock painting and carving were discontinued, or why people left. There are neither indications of war nor of waves of migration. It remains one of the park’s mysteries.

Questions about the Rock Paintings and Carvings

Our last historic site is Toca da Ema do sítio do Brás I – they do know how to come up with impractical names for their sites. Cida has worked here for more than 20 years and loves sharing her detailed knowledge with us. It doesn’t mean she can answer all my questions.

“There remain many puzzles to be solved,” she says as she points to images on the wall. “The movements of the figures are generally easy to interpret, but we struggle with the isolated, often geometric figures of which we have no idea what they represent.”

I leave with more questions than answers. As I peek one last time through the Pedra de Fudrada, and the bright blue sky behind it, I realize that’s ok. I have seen only 15 of the 800 sites and am saturated with all I learned and saw today. I decide to leave this park on my bucket list for a second visit.