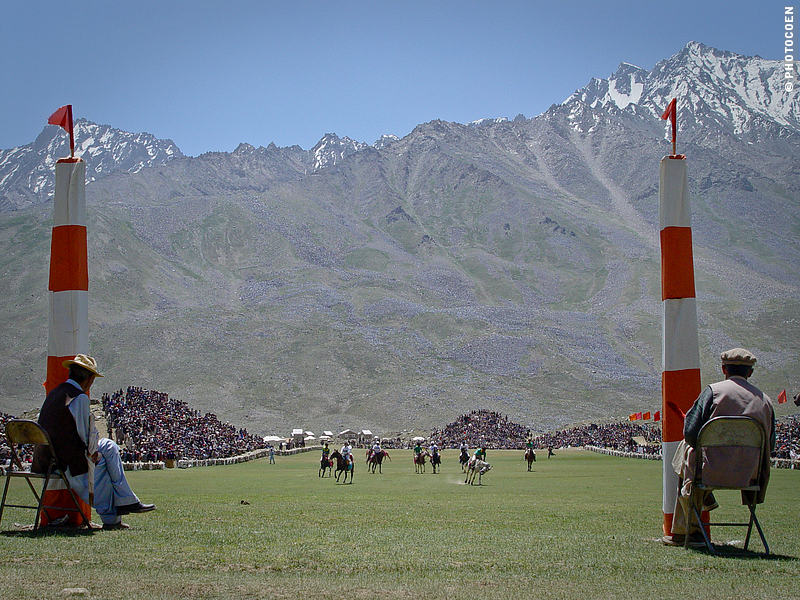 Starting from behind the goal line, holding the ball and mallet in one hand and perfectly restraining his horse with the other, the horseman slowly moves forward. When he approaches the center of the field, he spurs his horse to maximum speed, tosses the ball into the air, hits just before it reaches the ground and launches it deep into defensive territory.

Excitement rises in the stands as bands of drummers and surnai pipers try to outdo each other and the crowds cheer their teams. Eleven horses dash towards the ball and the field becomes a cloud of dust with mallets flying through the air. Broken mallets are replaced on the fly by assistants, risking their lives when they run onto the pitch. No coordinating or tactics seem to be involved.

The polo players push, pull and hang off their horses to get into the best position to hit the ball, until a team scores. Instantly the teams change halves and the scoring rider must pick up the ball and bring it into play again, putting the opposing team under pressure to fly back to block or counter his attack. A talented player, or a lucky one, is able to aim directly between the two posts and thus score again and again, having successive runs until his luck, skill, or horse runs out.

In north Pakistan the game has developed in a manner different from elsewhere in the world, the main contrast being that it is much tougher. Whereas polo normally has 4 players, here each team has 6 players. The game is not played in 6 periods of 7.5 minutes, but in 2 halves of 25 minutes. Contrary to polo games elsewhere, no changing of horses is allowed.

These factors, combined with the altitude of 3,800 meters, and thus rarified air, make the game ruthless. It is not uncommon for a horse to drop dead from a heart attack during the tournament.

As a visitor, I found myself torn between two conflicting values: The first, appreciating this long-standing traditional cultural event on its own terms; the second, concern about the treatment and use of the horses. This ambivalence is not uncommon in travel to developing countries, and visitors who cannot suspend judgment or outrage here might be better off passing the event. The flip side, of course, is that to understand a culture means understanding all of it, not just one small part.

If not exhaustion, the lack of rules may be the cause of injuries or death. There simply are no rules, except that the players have to stay in the saddle, and referees are only needed to allow or disallow a goal. The game is won when a team scores 9 goals.

A fascinating aspect is that here polo is not necessarily a game only for the rich and in order to encourage men to participate a fund has been set up, from which a player receives compensation when his horse dies.

The Highest Polo Tournament in the World

The location of this 3-day spectacle is the Shandur Pass, which lies between Gilgit and Chitral, the 2 main towns in Pakistan’s mountains. It’s a scenic region of lofty mountain ranges, fertile valleys and crystal clear rivers. For the greater part of the year it is covered with snow and desolate but for a couple of grazing yaks.

I hardly recognize the area when I return early July for this annual event. On my way here I already remarked that the usually empty roads were loaded with buses and jeeps packed with chanting and cheering spectators but also hundreds of them walking from god knows how far to attend the event.

On my arrival I see a sprawling bazaar has popped up with vendors selling anything from toothpicks to woolen shawls, from mattresses to spare parts for Jeeps. Thousands of spectators sleep in makeshift tents made out of canvas or plastic, which they either bring themselves or which they rent for a couple of rupees. Other entrepreneurs have opened tent restaurants. Water is taken from streams that run across the valley, whether for drinking, cooking, washing or doing the dishes. The only thing hard to find are toilets; most locals literally follow their call of nature.

Between the thousands of locals, we few foreigners stand out. When walking through the bazaar we are greeted and welcomed and, like everywhere else in Pakistan, invited for cups of tea. When evening falls, temperatures drop and large bonfires are lit. We all dance and make music deep into the night.

After three days of noise, fun, exhaustion and excitement the tournament is suddenly over. Everybody is struggling for a place on the road in order to go home and Shandur returns to nature. It has a year to regrow its grass, to absorb the rubbish and dirt left behind.

Yaks will graze again in peaceful silence and soon winter will cover the area with a thick layer of snow, until the next spring will bring a new awaking. Soon another year will have passed and all will return once more for north Pakistan’s event of the year.