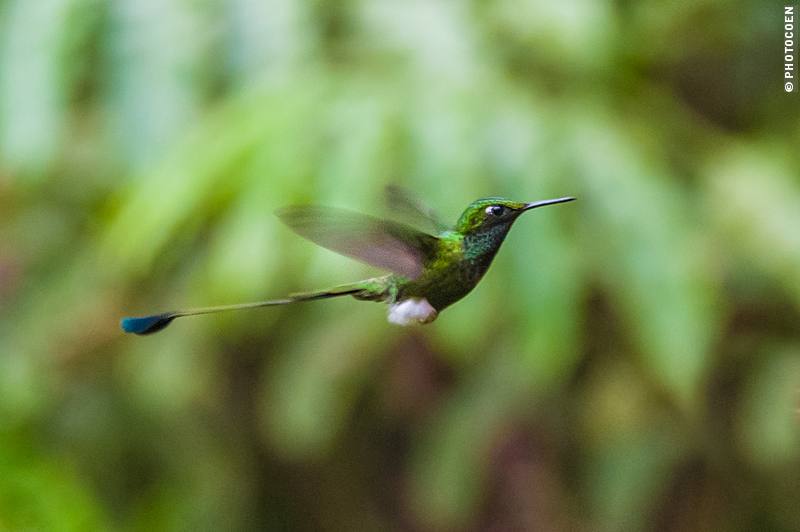 Purple-crowned Fairies, Green-crowned​ Wood Nymphs and Violet-Tailed Sylphs were fluttering all around me.

Had I just landed in an elf forest?

It most certainly felt like it. Surrounded by a towering wilderness of forested mountains with gray clouds closing in or receding just as suddenly, the area felt mystical enough to be one.

Hummingbirds with velvet, violet, green or otherwise iridescent feathers were in a frenzy: they shot right by us or hovered right in front of us a hand’s breadth away beat their wings around 100 times per second and pausing only very briefly on a shoulder or hat so that the camera was never fast enough.

The birds had a simple message: We’re hungry!

Luckily our guides knew how to satisfy the demands of these aerial acrobats and filled transparent containers with sugar water. All of a sudden we were no longer the focus of their attention, but the feeders with yellow plastic flowers were.

The Ethics of Using Feeders

Hummingbirds need a lot of sugar because of their metabolism (imagine having to flap wings 70-200 times per second, depending on the activity). In nature, the nectar from flowers provides them with this sugar.

Not finding any nectar for half an hour may be enough for a hummingbird to drop dead. Interestingly, they have a system that slows down their metabolism for twelve hours at night and, according to our naturalist guide David, the hummingbird is the only bird species to do so.

The hummingbird observatory is a well set-up spot within the Masphi Reserve, which we were visiting with guides from the Mashpi Ecolodge. I talked about the ethical use of feeders with David and José (the second, local guide). Is feeding them sugar water harmful to the birds? Does it spoil them so they will no longer search for flowers? Is sugar an adequate substitute for nectar?

“This discussion comes up constantly,” David said, “and not without reason, because the jury – among whom scientists – is still out on the subject,” José told us the birds specifically need nectar to reproduce and stop doing so when feeding only on sugar water.

The second issue is that when hummingbirds are fed through feeders they don’t pollinate flowers and so a second problem arrises: the disappearance of flowers.

Apparently this is happening in some areas in Ecuador where hummingbirds are fed on a large scale and flowering plants are only marginally present due to cultivation or urban development, which is obviously a situation different from the one here in the middle of nature.

David continued, “In my opinion we are doing a good thing here because, unfortunately, mankind is destroying the environment of the birds including their flowers. Only ten percent of the Choco Forest remains, in which the Masphi Reserve and Lodge are situated. If we don’t do this, we will lose the birds.” He also said that they notice that few hummingbirds come to the feeders when many flowers in the forest are blooming, which was about 3-4 months ago.

José and David are forever on the lookout for animals around them, always having their binoculars and a field telescope at hand. Here it was no different and they called us over when spotting birds such as the Blue and Black Tangara and Toucan Barbet.

One raccoon climbed up a feeder made of cut open bamboo which held a couple of peeled plantains, gorged itself on a chunk of the fruit and disappeared into the forest again.

José and I flipped through his bird book, which features some 130 different hummingbirds. The guides of the Masphi Ecolodge know of some thirty species that live within the Masphi Reserve, of which about a dozen can be seen every day at this hummingbird viewpoint.

At close quarters we admired the rare Booted Racked-Tailed hummingbird, and the endemic Velvet-Purple Coronet and Brown Inca. Some were easy to distinguish such as the Empress Brilliant, which has the longest bill of all species I saw here, or the incredible Violet-tailed Sylph, which with its long tail became one of my favorites.

Before we went on this tour I had wondered how we could be spending a whole morning watching hummingbirds. However, we became so entranced that we skipped a hike to a waterfall and returned to the hummingbird observatory to watch the spectacle for the second time.