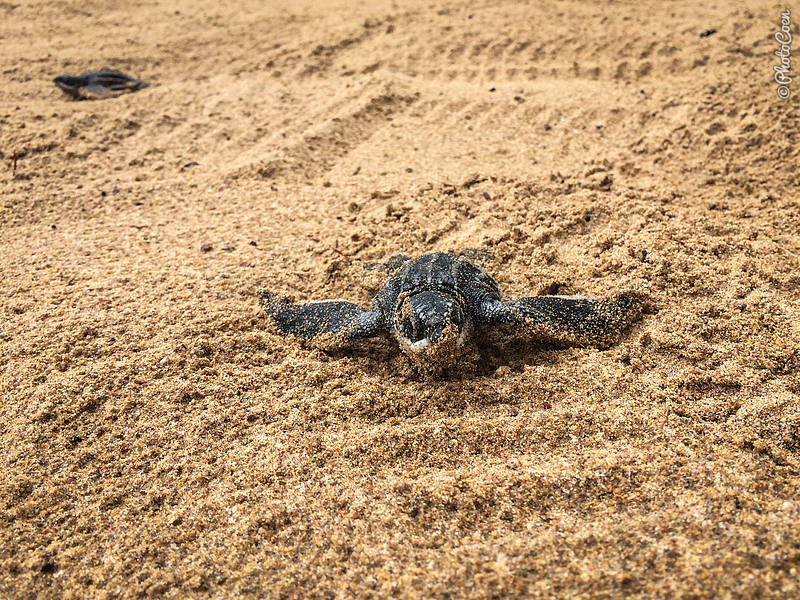 “Let’s wait for that group of pelicans to pass,” Alexandra says while the first drops of rain rinse our bodies, salty and sticky from swimming in the Atlantic Ocean. Nobody is moving away from beach lined with coconut trees to find shelter at the restaurant.

The moment is too precious.

“Hmm, more pelicans. Let’s wait a little longer.” Alexandra takes all the time necessary to safeguard newborn sea turtles good start in their lives. It’s her job, if not her passion.

“More pelicans,” one of the bystanders notices.

At last the birds, which skim over the water in groups of ten or fifteen at one-minute intervals, are out of sight. Alexandra puts a bucket on its side, the opening towards the ocean.

Twenty-some tiny sea turtles, born only a few hours ago, struggle to get out, crawling on top of each other if need be. Their goal is clear: the ocean.

It’s interesting to watch how we, the spectators, are struggling as well. We see how weak some of them are, how they seem lost in this new world of sand and start moving their bodies away from the sea instead of towards it.

Everyone of us wants to pick them up and guide them to the ocean. We can’t, of course, and while some do try to have to be corrected by Alexandra, others feel they contribute by flattening the surface in front of the hatchlings.

The Need to Dash for the Sea by Themselves

The little ones need the challenge. They have to conquer several meters of sand all by themselves before reaching the ocean. The exercise will develop their muscles which need to be strong so they increase their chance of survival in the ocean. ​

It’s incredible to see how within a time span of some fifteen minutes we see weak, lost-looking baby turtles grow in confidence and take each step with more force. By the time they reach the waterfront they hit the waves with absolute certainty of their destiny.

It’s incredible to see how within a time span of some fifteen minutes we see weak, lost-looking baby turtles grow in confidence and take each step with more force. By the time they reach the waterfront they hit the waves with absolute certainty of their destiny.

The newborns also need these meters of sand to orient themselves, to make themselves one with their place of birth. Only one in one thousand hatchlings will eventually return, either as a male to mate in these waters or as a female to lay her eggs on this beach. The rest will die. The pelicans we just saw are just one of the natural threats they face.

The beach is home to stray dogs. There are few on this beach compared to what we saw on the beach of Awala – Yalimapo in French Guiana (read about it here), but they are a threat, nonetheless. The eggshells​, recovered by Alexandra and her colleagues, will be buried deep in the sand to reduce the chance of dogs learning to appreciate the smell of them.

With humans around the hatchlings, like here, at least they have a safe passage to the ocean. Safe from predators like birds of prey. Which is not to say that humans don’t harm them. Without professionals like Alexandra who stop people from standing between the turtles and the ocean, which will disorient them, and who educates kids and adults alike on these beautiful creatures as well as environmental stewardship, many wouldn’t reach the ocean, or even been born.

The government has sea turtle projects on several beaches of the Paria Peninsula, in northeast Venezuela. This is the first year at Pui Pui, the beach where we’ve rough camped for the past couple of days. Five of the world’s seven types of sea turtles hit Venezuelan waters; two reach this particular beach: the loggerhead (caretta caretta) and the leatherback (dermochelys coriacea), the latter being the largest of all sea turtles.

The government has set up sanctuaries where workers patrol the beach when sea turtles come ashore to lay their eggs. The workers make sure nobody drives on the beach, destroying the nests, or makes bonfires, the light of which disorients sea turtles that want to come ashore.

The workers empty the nests and rebury the eggs in a fenced-in area, protecting them from humans (Venezuelans still eat sea turtle eggs as well as the turtle meat), scavengers, and waves that may sweep away the nest. When the turtles are born they wait with releasing them until late afternoon or early morning when there is no heat to exhaust them.

But even with all this work, effort, and clearly love, the turtles aren’t free from human destruction. The worst problem may be the destruction of men kind in the ocean. Here boat propellers kill them or severely damage their shells. Here they can’t survive waters thick with oil because of the umpteenth spill.

The challenges are enormous.

I wonder how many of the spectators around me, all staying behind the yellow demarcation tape put in place by Alexandra beforehand, are aware of the part they have in the degradation and destruction of our planet. Just the amount of garbage you find on beaches – in Venezuela as well as worldwide – is staggering.

Go, Grow, Be Healthy, and Come Back!

Yet, we all want these little ones to succeed. As they dash to the surf we cheer them on in silence. Go, go, go! Find your way the ocean, let yourself be taken away by the waves, grow strong, live a long and prosperous life and, one day, return to this beach.

It is hard to believe that these tiny reptiles that fit in the palm of a hand will grow up to a gargantuan animal of seven feet, on average will weigh 1200 pounds, and will span 2.7 meters from the tip of one front flipper to the tip of the other. No matter how tiny, the seven longitudinal ridges on leathery, domed shells that characterize leatherbacks are already clearly marked.

They waddle as fast as they can with some taking short breaks in between to catch their breath or to orient themselves. With each step closer to the sea their tiny flippers grow stronger, their movement more confident. One by one they find their way to the lapping waves where they either quietly glide in the waters or are taken away by the sweep of an oncoming wave. 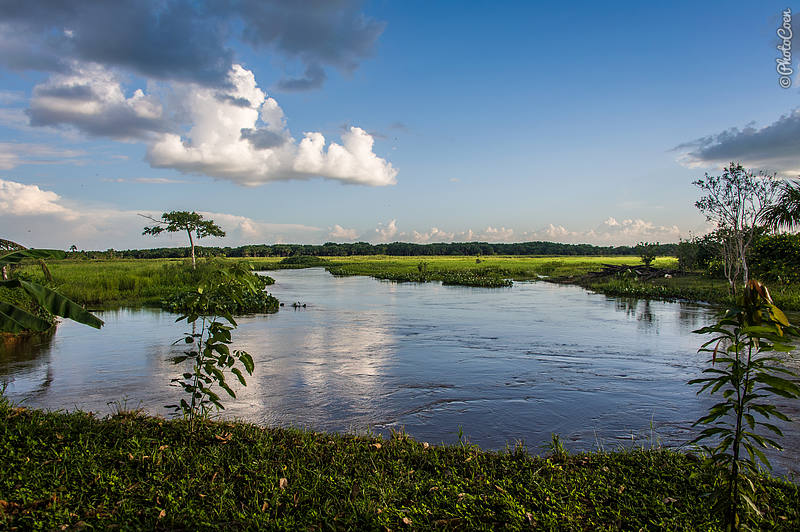 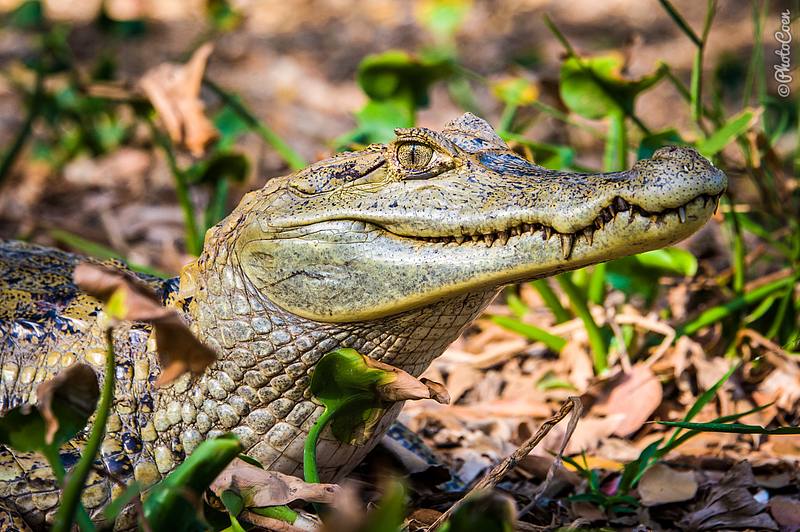