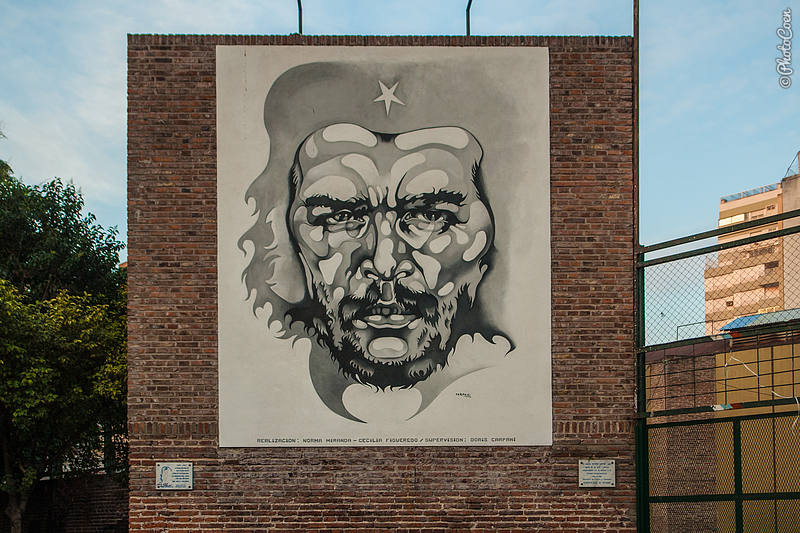 Truth be said, before coming to South America I didn’t know much about Che Guevara. Some kind of revolutionary guy, right? But what exactly had he done in Cuba and Bolivia?

And ‘Che’, what kind of name is that, anyway?

And no, I had not read his Motorcycle Diaries, or seen the movie that followed.

All that changed when we reached Argentina. When we visited Rosario, near Buenos Aires, we stumbled upon two interesting things. First, it was Flag Day. Second, Che Guevara was born here. It was time to learn a bit more about this guy.

A Che Guevara Statue in Rosario

In fact, in Rosario, you couldn’t really escape Che Guevara. On the plaza already carrying his name, we learned they had inaugurated a statue of the bearded icon in 2008, 80 years after his birthday, depicting him in his combat fatigues and characteristic beret.

Thousands of people donated some 75,000 pieces of bronze to Andrés Zerneri, the Argentinean sculptor of the effigy. Old candlesticks, padlocks, decorative objects and even relics were sent from all over the world – like the bronze keys of houses abandoned by Argentineans who fled the military dictatorship that ruled Argentina in the ’70s.

While in the course of time their lives have returned to normal, the keys remained an important token of the past. The monument of Che Guevara provided them with the right opportunity to give the key a new place: it was melted and became part of the ‘new’ Che. Che Guevara’s statue is filled with memories of its donors and thus became truly a people’s statue.

Like in the rest of the world, Che Guevara is merchandised in Argentina – he appears on billboards, t-shirts, hats and key chains. Of course somebody was smart enough to name his hostel after Che, “Hostel Guevara”. It is located across the Parisian-style apartment complex where Che was born.

Thirty kilometers south of Córdoba lies Alta Gracia, one of the towns where Ernesto Che Guevara lived. The town is known for its museum centered around the icon’s life. By the way, another good reason to visit the town here is an ancient Jesuit Estancia.

Ernesto Che Guevara was born in Rosario in 1928 but moved to Alta Gracia as a child after the doctors diagnosed him with asthma. The picturesque house at Avellaneda 501 was built in 1911 and named after the youngest daughter of the first owner of the house, Nydia, but the name was changed into Villa Beatrix after Che Guevara’s family moved in. Guevara lived here from 1935-1937 and 1939-1943. The second house in Alta Gracia where the family lived is just down the road, on number 14.

In 2001 Villa Nydia opened its doors as Museo del Che Guevara and is considered a heritage site by Alta Gracia. It is one of the seven homes where the Guevara family lived and currently houses Argentina’s best museum on Che’s life (in Buenos Aires are at least two other museums of Che Guevara, but their collections are much less complete).

El Museo del Che Guevara gives a thorough account of Guevara’s life. Pictures, letters and explanatory panels (Spanish and English) extensively tell about his childhood, his youth, his ideas about the revolution and his role in international affairs. Furniture, books, gifts, his old bicycle and motorbike – the latter famous after the book and movie Motorcycle Diaries – are all on display (find them here and here).

An oddity is the old toilet, brought to the visitor’s attention by a sign saying ‘this toilet is part of the museum’. The museum also proudly displays pictures of Hugo Chavez and Fidel Castro visiting El Museo del Che Guevara in 2006.

And so our journey learning about Che Guevara began. As to his name ‘Che’ even though his name is Ernesto… Che is the word that Argentineans use for a friend, a buddy, ‘dude’, etc. Apparently, the name stuck for Guevara as he continued using the word also outside Argentina where the use of che does not exist.

In Bolivia, later on in our journey, we learned much more about the last phase of his life. I wrote about it here.