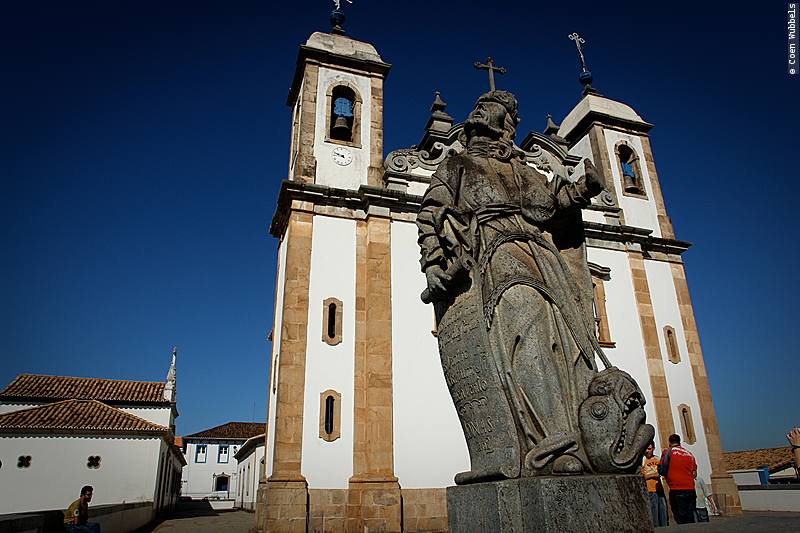 When you follow the Estrada Real in Minas Gerais, the Royal Route along which gold and other mined treasures were transported to Rio de Janeiro in the colonial days, you’ll probably get saturated by the number of baroque-rococo churches along the way. Even we did, and we are church buffs.

Congonhas is a place to take a breath. Okay, there is a church and yes, you should see it (in fact it’s a basilica and a UNESCO World Heritage Site), but, as far as we are concerned, the town’s most interesting attraction is outdoors.

The Prophets of Congonhas

All prophet statues carry a text, in Latin, from their prophecies. Daniel, who was thrown in the lion’s den, can be identified by the lion at his feet and Jonas is accompanied by a whale.

One of the intriguing questions is why these Old Testament figures were sculptured since images of Old Testament prophets are little used in Brazilian churches, contrary to, for example, the ubiquitous four Evangelists of the New Testament. Another point of interest is that the little-known prophet Habakkuk is among these twelve but that the much better-known Elias is missing.

This is probably Antônio Francisco Lisboa’s most famed work of art. He is better known as Aleijadinho, which means Little Cripple – a nickname he gained after he lost his fingers and toes as well as the use of his lower legs. Between 1800 and 1805 he sculptured this beautiful work called The Prophets.

He was an architect of churches, as well as a prolific sculptor and wood carver, and had much influence on the transformation of the architecture of his days. His most famous works are the Assisi Church in Ouro Preto and these sculptures in Congonhas.

Antônio Francisco Lisboa was born in Ouro Preto (then called Villa Rica) in 1738, as the son of a Portuguese architect and his slave Isabel. He never had a formal training in architecture but was surrounded by four masters: his father (who, among other things, designed the Matriz NS da Conceição de Antônio Dias Church in Ouro Prêto), his uncle, and two Portuguese specialists on baroque art.

These four men introduced him into the baroque art and Aleijadinho was considered a faithful student who studied independently and had an exceptional gift for sculpting and carving. Through pictures he studied European baroque and rococo and with this knowledge he developed his own style which later became known as Barroco Mineiro –with Mineiro referring to Minas Gerais, which was the state where he lived and worked.

At a young age Aleijadinho caught a debilitating disease. He lost his fingers and toes as well as the use of his lower legs, which led to his sobriquet Aleijadinho (Little Cripple). He didn’t give up his work and, according to the popular story, had hammers and chisels strapped to his body and continued his work as an architect, sculptor and woodcarver. The latter is considered a myth by some, to add a touch of grandeur and drama to his work.

Aleijadinho died in 1814, at the age of 76, poor and forgotten. During the 1920s his art received closer attention, after which he has been considered a master in his craft and one of the first to contribute to a genuinely Brazilian artistic language. He was buried in the Matriz NS da Conceição de Antônio Dias Church in Ouro Preto, near his place of birth.

But there is more on this plaza to admire. Below the basilica stand 66 chapels with 66 cedarwood​ statues designed by Aleijadinho from 1796 to 1799, depicting the Stations of the Cross. Part of the statues was carved by Aleijadinho himself, others by his assistants. The statues were painted by Manuel da Costa Ataíde – with whom he worked together on many projects – and Francisco Xavier Carneiro.

And after this extraordinary visit we were ready for, yes, some more churches.