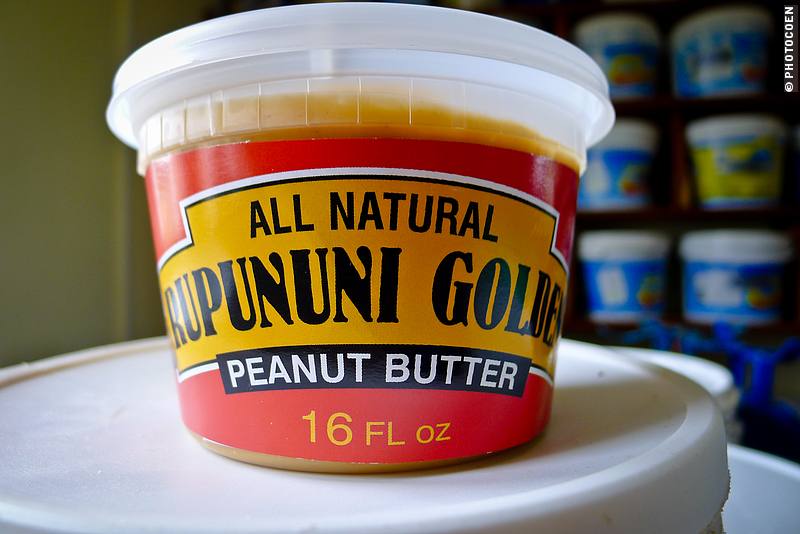 Do you know anybody who doesn’t like peanut butter? I don’t and nobody has ever understood why I didn’t like it.

Neither did I. I just didn’t.

Until, one day, we were traveling in the Rupununi Savanna of Guyana, which lies on the north side of the South American continent, east of Venezuela and west of the two other Guianas: Suriname and French Guiana.

In the village of Aranaputa we saw a sign: “Peanut Butter Factory”, and were intrigued.

The place appeared deserted but no, a woman came to the door and we met Yvette. She explained that because of the school holidays the other 17 employees were on vacation.

We expressed our interest and Yvette was happy to show us around. This women empowerment project started 5 years earlier as a pilot and today provides for a steady source of income for 18 families. 2 years ago, this factory was built.

The wooden building radiates professionalism. It is clean and on the wall hang a number of hygiene instructions about washing hands, not wearing nail polish and such. There are few rooms and machines. Simple, basic, clean, no clutter. I like that.

In one room Yvette pointed out the 2 machines necessary to peel the peanuts and to roast them. In the second room the peanuts are crushed into peanut butter and only sugar and salt are added. That’s it. That is all you need to make peanut butter.

Well, organic peanut butter, that is. Later I learned that you can add loads of things. I randomly quote 2 lists of ingredients of peanut butter whose brand sounds familiar to me:

Yvette asked us if we wanted to taste her peanut butter. I didn’t want to be impolite so I tried a cracker with the spread on it.

It was delicious! I wanted another one!

I asked for the secret.

Yvette said there isn’t any. I remarked that the taste of her peanut butter bore no relation to those peanut butter brands I had tried at one time or another.

She said that an important difference between her (and other organic) peanut butter and the industrialized version is that the industries take out (yep, take out) an ingredient: the highly valuable peanut oil, which is sold for lots of money to other industries. Instead they add cheaper oils, like the above-mentioned vegetable oils.

Is that the difference in taste? I don’t know, but I did know I liked this one so we bought a kilo.

Unfortunately, this delicious, organic peanut butter can’t compete with the industrialized version. Peter Pan, imported from the U.S., wins from this locally produced version. How tragic is that?

One of the reasons, Yvette told me, is that Guyana’s capital of Georgetown is too far away and it takes too long for her peanut butter that is not stuffed with conservatives to get there, and, as a result, it spoils.

During the rainy season road conditions can be so bad that a one-day trip can easily turn into five days. (I will add a personal opinion, which is that there must be more to it because the peanut butter doesn’t spoil in one or two weeks; no doubt there is more in the field of logistics that simply is not up to scratch and thus causes unnecessary delays).

Yvette continued her story. When they were about to give up on the project as there appeared to be no commercial market for the product, they were given the contract to supply schools with peanut butter cassava sandwiches. In Guyana, as in many other underdeveloped countries, schools use food as an incentive for kids to go to school.

As children are less expensive for the parents because they don’t have to buy that meal for them (here it’s breakfast, in other places they provide lunch), the incentive works miracles in many countries. By the way, the cassava bread is made in this factory as well.

The project is such a success that more factories have been constructed in the Rupununi region to supply other, often remote, schools with breakfast. They all sell their peanut butter under the name “Rupununi peanut butter” but Yvette would like to have her own logo as with the increase of factories the quality starts to differ as well and she likes people to know which one comes from their factory.

Travel brings out all sorts of surprises, doesn’t it? This most certainly is one of our favorites in Guyana. If one day you happen to be in the Rupununi area, be sure to stop in Aranaputa and have a look – and taste – for yourself.

By the way, a couple of months later I had my second tasty peanut butter. Again, an organic version, homemade. Marcel serves peanut butter on the breakfast buffet of his guesthouse Portal do Vento (Brazil) and showed me how to make it. It’s unbelievably simple but you do need a food processor.

Grind 1 kilo of roasted peanuts, add 50 grams of sugar + 20 grams of salt (or to your taste) and add a bit of vegetable oil (any type that doesn’t have a taste) to get the smooth substance.

A mere 15 minutes to make your own peanut butter. And note that you can keep it for a couple of months in the fridge.

Well, no more processed peanut butter for Coen. Whenever we have the opportunity, when staying with people who do have a food processor, we’ll make our own. And I will enjoy it as well.

Additional Reading on the Rupununi